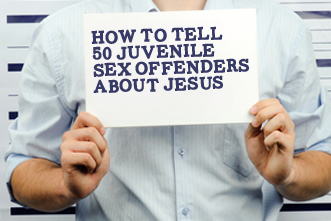 I will never forget the first time a group of us gave a chapel service to about 50 juvenile sex offenders. They were a crew of 14 to 19 year olds from all over the East Coast who had been charged with a serious sex crime.

For teens, a “serious sex crime” is often limited to:

I was given the opportunity to share with them for about 15 minutes. And although I knew going into this chapel service I was going to be the main speaker, I didn’t want to prepare a message full of statements.

Being that it was a smaller group that could respond to me while I spoke, I instead prepared a message full of questions.

The first question I asked was this: “How many of you have been seriously hurt by others in your lives?” They all raised their hands.

The assumption with children and teenagers—especially these kids—is that they were first victims. Victims who became victimizers.

Most of us follow the same process. When we are hurt, we react in retaliation.

Then I asked them, “How many of you have wanted to hurt others in the same way you’ve been hurt?”

Same response. Some of them blurted out, “I want to hurt them worse.”

Most of us react proportionally to the seriousness of our pain. If someone cuts us off while we’re driving, we might flip a finger or shout something out. On a more serious level, if somebody abuses us physically, we may try to abuse others or, possibly, abuse ourselves through substances. The sad thing for these kids we visited was that many of them were in juvie for the sins of somebody else. Yes, they’re still guilty of their crimes, but they were first victims.

They had been raped.

They had been sexually molested.

They had been sexual assaulted.

They had been the victim of a crime they didn’t have the power to stop. They had been overpowered and exploited.

As I was closing, I asked them, “If you had the power to hurt those who hurt you, what would you do?”