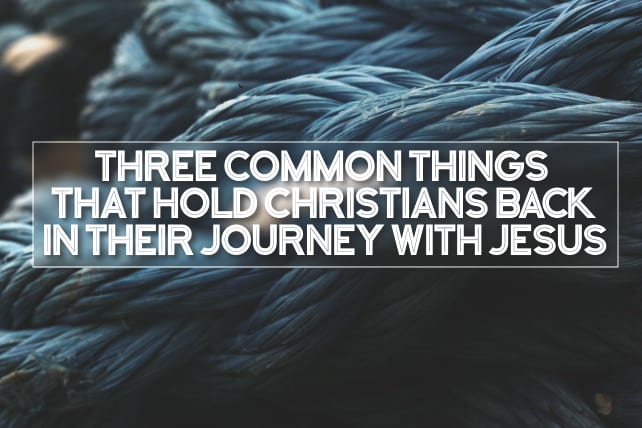 Are you where you want to be in your walk with Jesus?

Closeness with Jesus = effectiveness in life.

Walking with Jesus isn’t always the easy thing, but it’s always the right thing, and people who strive to become more like Christ are people who make the biggest impact in their families, schools and work environments.

However, walking with Jesus is NOT easy!! (I wish it were! I wish I could say if you pray and read your Bible three times a day, all your problems will go away—but that’s not true!)

There are things that war against us walking with Christ—things that take our eyes off of Him and put them on other things. In being a pastor for over 25 years, here are three of the MAJOR things that hold people back from experiencing the abundant life that Jesus promises in John 10:10.

Yesterday at NewSpring I spoke about unforgiveness, and the response was overwhelming.

There are people in our church who have legitimately been hurt by someone else. Maybe you were molested, raped, falsely accused, cheated on—and those things carry so much hurt that to say “get over it” is one of the most uncompassionate things a person can say.

However, in a world that lies, cheats and manipulates people, we as followers of Jesus are called to forgive.

Jesus, as He was being mocked, beaten and tortured in public, prayed for the forgiveness of His tormenters in Luke 23:34.

Some have questioned this text in regards to whether or not it is works based theology.

As we talked about yesterday, forgiveness is not a feeling. It’s not something we offer to people when we feel like they “deserve it!” It’s a decision followed by a series of decisions every time we have a negative thought or emotion toward someone that hurt us where we decide, “In this moment, right now, in spite of how I feel, I choose to forgive.”

I believe that sexual sin has the potential to destroy the work of God in us more than any other sin.

I’ve heard people argue that all sin is viewed as the same in the sight of God—which MIGHT be true. However, Paul seems to distinguish sexual sin as something a bit more intense in I Corinthians 6:18 when he says …

Flee from sexual immorality. All other sins a person commits are outside the body, but whoever sins sexually, sins against their own body.

Paul didn’t say “sexual sin is a no-no,” he said RUN from it. Then there’s the phrase “all other sins,” thus comparing sexual sin—and seemingly saying that though it may carry the same weight as far as sin and separation from God, there seems to be heavier consequences associated with it.

I know people who have committed sexual sin in the past who wonder if Jesus REALLY did forgive them.

I know people caught up in sexual sin who really do wonder if they can break free from the behavior that is seemingly draining the life out of them.

Reality is: When Jesus saves us, He forgives us from ALL OUR SIN (see Colossians 2:13.)

Jesus clearly says in Matthew 6:21 that a person’s heart can be seen by where their money is.

He also said in Matthew 6:24 that the number one competitor for a person’s heart is money.

I asked Jesus into my life in 1990; I did not surrender my finances to Him until 1999—and learned quickly that when I put all I have in the hands of the ONE who is more capable than me, He can do way more than all I ever asked for or imagined.