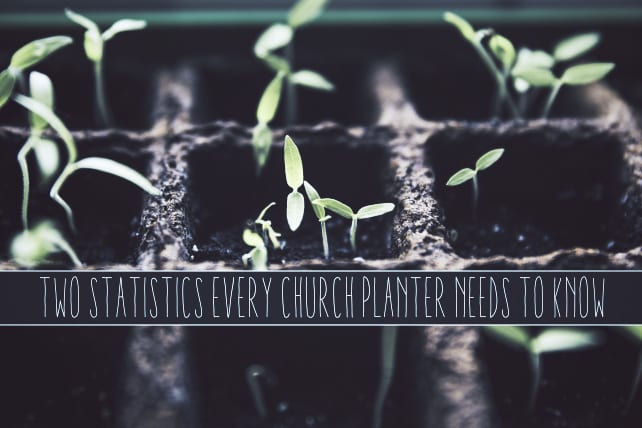 As one who values church planting and church planters, I’m always looking for ways to encourage both. Sometimes it’s a series of posts, other times they’ll stand alone. Today’s post is in the latter category.

These are two simple but very important points for church planters.

It has become fairly common to send a large (30+) group of people somewhere to plant a church. Others seek to build a group exclusively from the harvest in their new community. The churches I’ve planted never began with a core group. I have always parachuted in—that’s really the best description. While I have never begun with a core group, at the same time, I’ve never begun without a team. Once on site, I set about building a team.

Biblical kingdom growth is evangelism that results in new churches. Though I’ve never seen a church planted with 100 percent new believers or lost people, it is certainly biblical to expect a large number of the members and attenders to come from the harvest. It is concerning to see an increasing number of church plants where the vast majority of the people are dissatisfied, disgruntled or re-energized Christians.

Sadly, strategies that lend themselves to transfer growth have become the norm. In an issue of Mission Frontiers, Mike Breen laments that in the United States, “96 percent of church growth is due to transfer growth and not churches striking into the heart of our enemy’s territory. We’ll consider it a win because we have the new service or program that is growing…but that growth is mainly from people coming from other churches. That’s not a win! That’s a staggering loss.”

The question we have to ask is: What is healthy?

I would ask you to consider two statistics that can provide a church plant with a solid foundation for healthy growth.

First, I think it’s OK to have about half of your congregation be people who are committed with you.

These are strong Christians that can form a core team and provide leadership. If they’re used to engaging the other half who are lost, unchurched or unengaged, then the committed individuals become evangelistically attuned to the culture. The idea is that these Christians become co-laborers with you instead of customers of a new church. But if that number grows much larger than half, there’s no cultural DNA or space for the seeker or skeptic.

I think the goal I would give to church planters is to try to have at least 50 percent of your people from the harvest.

In the church I planted in Erie, Penn., we had more than half new believers or non-Christians. We baptized 51 people one day and 32 on another occasion. Two-thirds of the adult members of our church were baptized there. It was great, but it was hard. I needed more help. That’s why I would suggest having some on your team be mature believers.

Second, your church leadership needs to be intentionally evangelistic with 25 percent of their time.

The church I planted north of Nashville, Tenn., was different than Erie. We had a difficult time finding people who would admit to being lost! The Bible Belt is a different context and church planters have to work a lot harder to engage lost people. Our goal was for our pastoral leaders to spend a quarter of their time engaging lost people in evangelistic efforts.

In Nashville we met people and built relationships with them. I insist on this because it’s usually not a natural part of the organizational inertia of the church. We led our small groups to engage in evangelistic activities. By adding this intentionality, you can develop an evangelistic culture. You need this in places where evangelism is daunting because either everyone already claims to be a Christian or where hostility toward Christianity is high.

We plant churches so we can fulfill the Great Commission of making disciples. In order for that to happen, church plants need to have committed believers on their team, but no more than around 50 percent. The leadership of the plants needs to spend 25 percent of their time being evangelistic in their community. With these two statistics in mind, church planters can start and grow healthy, Great Commission churches.