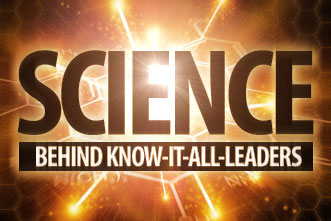 Editor’s Note: As leaders, we’re often addicted to being right. However, this penchant can also do damage to our ministry teams and create a culture that’s unhealthy and, well, unbiblical.

In this insightful post, we take a look into the science behind our behavior. This doesn’t replace the fact that we need to submit to the Spirit, but it is helpful to understand the way our brains work— an amazing testimony to God’s greatness in design — in order to build healthy leadership habits.

I’m sure it’s happened to you: You’re in a tense team meeting trying to defend your position on a big project and start to feel yourself losing ground.

Your voice gets louder. You talk over one of your colleagues and correct his point of view. He pushes back, so you go into overdrive to convince everyone you’re right.

It feels like an out of body experience — and in many ways it is. In terms of its neurochemistry, your brain has been hijacked.

In situations of high stress, fear or distrust, the hormone and neurotransmitter cortisol floods the brain. Executive functions that help us with advanced thought processes like strategy, trust building and compassion shut down.

And the amygdala, our instinctive brain, takes over. The body makes a chemical choice about how best to protect itself — in this case from the shame and loss of power associated with being wrong — and as a result is unable to regulate its emotions or handle the gaps between expectations and reality.

So we default to one of four responses: fight (keep arguing the point), flight (revert to, and hide behind, group consensus), freeze (disengage from the argument by shutting up) or appease (make nice with your adversary by simply agreeing with him).

All are harmful because they prevent the honest and productive sharing of information and opinion.

But, as a consultant who has spent decades working with executives on their communication skills, I can tell you that the fight response is by far the most damaging to work relationships. It is also, unfortunately, the most common.

That’s partly due to another neurochemical process. When you argue and win, your brain floods with different hormones: adrenaline and dopamine, which make you feel good, dominant, even invincible. It’s a feeling any of us would want to replicate. So the next time we’re in a tense situation, we fight again.

We get addicted to being right.