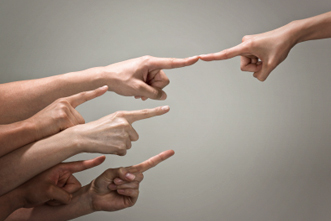 “A cord of three strands is not quickly broken.” ~ Ecclesiastes 4:12

Ever been in this sticky wicket?

Joe and Jana are two leaders who report to you. But Jana doesn’t like Joe. She thinks he’s overbearing and condescending in the way he interacts with her. Joe doesn’t know this, of course. She’s never told him. But you know it, because, as you’re her direct report, she has come to you and demanded you step in and do something about it.

If you’re like most leaders, here’s what you’re likely to do next: You assure Jana that you’ll look into it. Then you immediately set up a one-on-one meeting with Joe, in which you explain that Jana has complained about the way he treats her. Joe gets defensive, says Jana is overreacting and/or doesn’t know how to relax and take a joke. You nevertheless require Joe to change his approach. He reluctantly agrees.

You then meet with Jana one-on-one to let her know you’ve talked with Joe, and ask her to come back to you if Joe’s behavior doesn’t change. Jana and Joe, meantime, continue interacting as if none of this has happened, although they are clearly very tense around each other now, even more than they were.

Does this sound like a teenage soap opera to anybody else?

People are messy, and leading them well is a messy business.

As leaders are pulled into various relational messes on account of their position, they often feel compelled to play the role of middle man. But this is rarely (probably never!) a savvy leadership decision. It invariably leads to any number of negative outcomes:

It becomes an unwanted time sucker you can’t afford to have.

It fails to produce the desired result — that is, a positive, open relationship among your team members.

It puts you in the middle of a “he said, she said” where what you say in private is likely to be exaggerated or misquoted by the parties involved, leading to you being labeled as two-faced or manipulative.

It usually leads to one or more of the people involved being dissatisfied with the outcome, and blaming you for not “fixing” the problem to their satisfaction.

It trains your staff to expect you to step in anytime they have a beef with another team member.

OK, so in other words: Don’t do this! But, then, what’s the solution?

The next time Joe and Jana have an issue, leverage the power of triads to resolve it, like this:

1. Jana comes to you complaining about Joe. You listen, briefly, but fairly quickly break in and ask, “Have you already spoken to Joe about this, and if so, what happened?”

2. Jana says she doesn’t feel safe talking to Joe alone. That’s why she’s coming to you. She wants you to talk to Joe.

3. You tell Jana you understand she doesn’t feel safe, but that you aren’t going to play the role of middle man because it won’t lead to a positive result (see bullet list above). Instead, you will call a meeting of the three of you (triad!), in which you will guide them to have a conversation about what’s bothering Jana, and work with them to come up with their own solution. After some convincing and reassurances of safety, Jana agrees.

4. You meet with Joe and Jana together, and explain to Joe that there’s an issue Jana would like to talk with him about, and that you are there to help them facilitate the conversation and to act as a witness and an accountability partner for whatever solution they come up with.