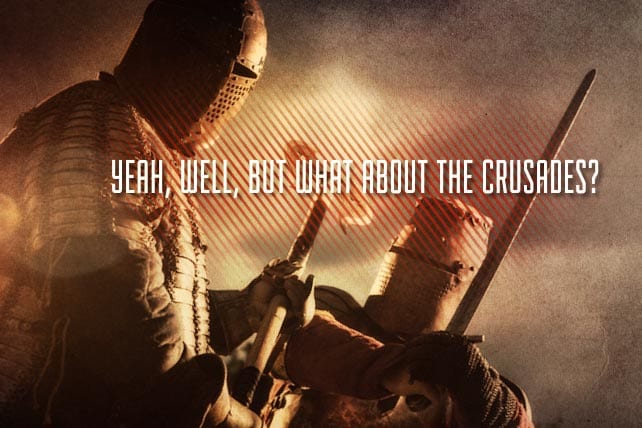 We are coming up on a thousand years, and Christians still haven’t made up for the Crusades. No matter how many times Billy Graham makes the most admired list, we’ll still have the Crusades to deal with. When President Obama encouraged humility in denouncing ISIS today in light of the Crusades from close to a millennium ago, he may have been making a clumsy moral equivalence argument, but he was only voicing what many Americans (and many Christians) have articulated before. Remember the faux confessional booths from way back in the 2000s when Christians would apologize to non-Christians for the Crusades? If there is one thing in our collective history that we cannot apologize for enough, it is the history conjured up by pictures like the one in this post.

Yet, for all the times we’ve lamented the Crusades, how many of us know more than two sentences about them? Isn’t it wise to know at least a little something about the Crusades before we borrow them to get an advanced degree in self-recrimination?

A few years ago I picked up a copy of The New Concise History of the Crusades by Thomas F. Madden, a history professor at Saint Louis University. It’s a fascinating book. I would recommend it to anyone who wants to know more, but not too much (it’s only 225 pages), about the Crusades.

What Are We Talking About?

The Crusades refer to a series of military expeditions over several centuries, beginning with the First Crusade in 1096 through the end of the Fifth Crusade in 1221, and continuing on in more sporadic fashion up until the Reformation. The term “Crusade” is not a medieval word. It is a modern word. It comes from crucesignati (“those signed by the cross”), a term used occasionally after the 12th century to refer to what we now call “crusaders.” Contrary to popular opinion, the Crusades did not begin as a holy war whose mission was to convert the heathen by the sword. In fact, very few of the crusaders saw their mission as an evangelistic one. The initial purpose of the Crusades, and the main military goal throughout the Middle Ages, was quite simply to reclaim Christian lands captured by Muslim armies.