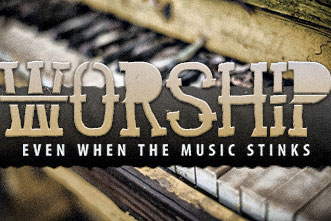 Not all churches are blessed to have world-class musicians or top-of-the-line sound equipment, or talented people running the board. But, within Christian discussions on worship, it seems like there’s an expectation that all churches should.

People can’t engage with hymns. They want “simple” and they, apparently, also want really big sound. Our church has a terrific group of musicians leading our congregation in their praise, so I totally get this. When people are giving it their all and the quality is phenomenal, it’s a really great thing to be a part of.

But let me ask you something: Can you worship even when the music “stinks”?

This weekend, we were visiting a Baptist church in a small town here in Ontario. The atmosphere was fascinating.

This is the kind of church where you stand when the pastor enters the sanctuary and wait for him to leave before you make for the exit. The opening processional was handled on an electric organ. The songs were sung by five people (including the pastor) accompanied only by a piano. And they were all songs in keys in which man was never meant to sing.

They weren’t setting the world on fire with their talents. But you know what was cool?

People were singing their hearts out to Jesus in this church.

I saw more than a few people with hands raised (did I mention they were Baptist?). Their hearts were engaged. They were in it to win it.

I have to wonder, is this something we’ve forgotten in the age of the high-tech megachurch?

I’m not saying we shouldn’t all be pursuing excellence to the degree of ability God has given us, but have we lost the ability to be engaged in worship even when we aren’t particularly into the style, when there’s only a piano and a couple of singers, or when the special is a bit off-key?

They get that worship through song isn’t about what we like, necessarily, but about the object of the people’s affection. So you can sing a song that makes you feel like you’re going through puberty a second time because it’s not about whether or not your voice is going to crack. It’s about Jesus and His glory, not our preferences.

How can we do a heart check on this? Here are a couple of options:

1. If you attend a church with high-end music, try to visit a small town church on your next vacation.

The music won’t be as good as you’re used to, I can almost guarantee it. But watch how you respond; ask the Holy Spirit to test your heart and see what He does in response.

2. If you’re a worship leader, arrange for a ridiculously streamlined morning of worship.

Seriously, pull a Bob Kauflin. Do one guy and a piano or guitar. And then check your inbox. You’ll have a better sense of where people are at by the number of complaints you receive.

Worship isn’t about style or preference, it’s about God. You can worship even when you think the music kind of stinks if you keep that in mind.