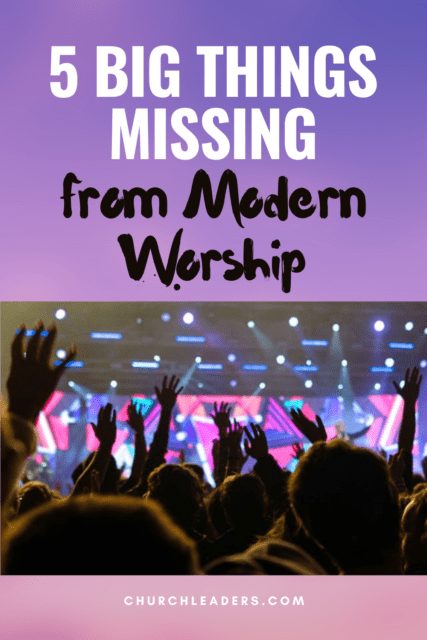 3. Confession of Sin and Assurance of Pardon

Traditionally, Protestant worship services included a confession of sin and an assurance of pardon. Sometimes the congregation would confess their sins by reading a text or a liturgy or by silent prayer. Other times the pastor would confess the sins of the congregation on their behalf. It was a solemn moment. But then there would be the assurance of pardon, where the pastor would bring God’s own assurance that those who confess their sins are forgiven. Solemnity was replaced by joy. This pattern of confession and assurance naturally led to thankful worship and a desire to grow in holiness by hearing from God through his Word as it was read and preached. These elements came early and set up the rest of the service. Yet it is rare to encounter them today.

When Paul wrote to young pastor Timothy, he instructed him to preach the Word (2 Timothy 4:1-5). Christians have long understood that the best way to preach the word faithfully is expository preaching—to preach in such a way that the point of the sermon matches the point of the text. That is, the pastor needs to understand not just the wording of the passage, but the author’s intent in writing it. This leads to the most faithful interpretation and application. While there has been a great revival of expositional preaching in recent years, this element is still missing in so much of modern worship, replaced by topical sermons that wander from book to book, text to text, translation to translation. I am convinced that a congregation grows best when they are fed on a steady diet of expositional sermons.

It’s not that every one of these elements has to be prominent every week (and it’s not like these are the only elements that have gone missing). There is a time and place for topical sermons. A confession of sin and assurance of pardon may not be necessary every week. There can be a time for special music that is not well-suited to congregational singing. Well and good. But there was a time when each of these elements was prominent in Christian worship. Where have they gone? Or, perhaps more importantly, why have they gone?

I am convinced that most of these elements have gone missing for pragmatic reasons—they do not accomplish something the church leaders wish to accomplish in their services. Instead of searching God’s Word to determine what elements should or must be present in a worship service, leaders are judging elements by whether or not they work (according to their own standard of what works). Yet each of these elements represents a significant loss because each in its own way expresses obedience to God and brings encouragement to his people.