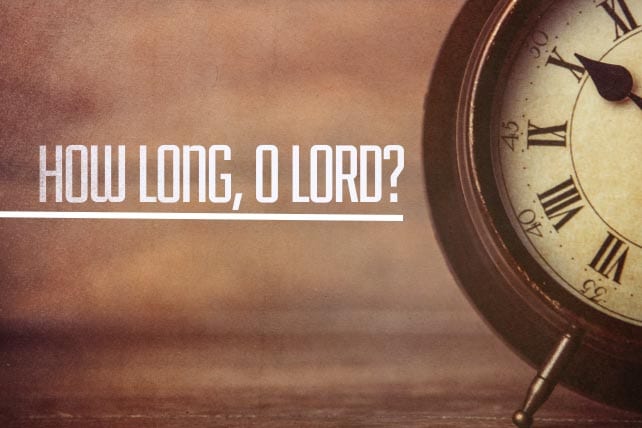 Peter tells us that “the Lord is not slow to fulfill his promise as some count slowness” (2 Peter 3:9).

God knows that he sometimes appears slow to us, which is one merciful reason he gave us the Bible. This book, which God took millennia to assemble, shows us that God is not slow, but patient in working out his redemptive purposes in the best ways (2 Peter 3:9). And it shows that he is compassionate toward us when we wait for him for what seems like a long time.

Not as Some Count Slowness

Abraham and Sarah were not only the parents of all of God’s faith-children (Romans 4:16); their lives are perhaps the most famous picture of God’s redemptive purposes in what seems like his painfully slow pace.

Abram (as he was first called) was already 75 years old when God promised to make him a great nation that would bless all the families of the earth and to give his offspring the land of the Canaanites (Genesis 12:1–3).

However, there was a problem: Abram had no offspring. His wife, Sarai (as she was first called), was barren (Genesis 11:30).

Years passed. Still no child. So Abram prudently planned to make his servant Eliezer to be his heir. But God said, “This man shall not be your heir; your very own son shall be your heir” (Genesis 15:4). Then he took Abram out and showed him the night sky and told him that his offspring would be so numerous it would be like counting stars.

But years later, it was still just Abram and Sarai in the tent.

Sarai became desperate and gave up on waiting. She decided that her maidservant, Hagar, could be a surrogate child-bearer for her. This sounded humanly reasonable to 86-year-old Abram, but he did not consult God and the solution backfired, big time.

Thirteen more years went by before God finally told the 99-year-old Abram that 89-year-old Sarai would bear a son, and he changed their names to Abraham (father of a multitude) and Sarah (princess). A year later Isaac is born.

It was 25 years of waiting, while any earthly reason to hope for a child went from highly unlikely to impossible. Their only hope was God’s promise, which was precisely God’s purpose in the long, confusing wait.

No unbelief made [Abraham] waver concerning the promise of God, but he grew strong in his faith as he gave glory to God, fully convinced that God was able to do what he had promised. (Romans 4:20–21)

God determined that all of his true children would be born again through faith to a living hope (1 Peter 1:3). So he took patient pains to cultivate it in Abraham and Sarah, and he does the same for us.