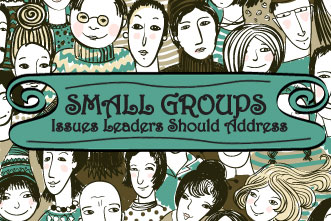 There aren’t many people (though I know a few) who enjoy confrontation. Even though confrontation can be hard or even awkward, it can’t be avoided. There are certain things that you as the group leader must be attentive to and address right away. Here are 5 things you MUST address within your group:

1. Conflict in the Group. You cannot overlook conflict within the group. When the group is out of line and not in unity, God cannot or will not move freely to do what He wants. Unity is the most important aspect of a healthy group. We will be talking more about addressing group conflict next week.

2. Corporate Group Sin. When group sin is taking place together, the small group is stunted of any spiritual growth and life change. A small group is NOT a place where you feel comfortable enough with the people in the group to join in sin together. Protect the group from becoming a place of sin (or as Jesus put it, a “Den of Thieves”). A few areas to watch out for are: gossip, drunkenness, coarse joking, flirtation between other married people, inappropriate touching, and ungodly forms of media.

4. Group Favoritism. One thing that should never make it into the culture of a small group is favoritism. This happens when group members favor some group members over others. When this happens, cliques within the group are created. Obviously, some relationships flourish more than others. There are naturally going to be people who just click better than with others. But group life should not entail a bunch of cliques coming together; rather it should be one group where everyone is included. Once people feel that they aren’t included or liked by everyone, walls start going up and group discussion and vulnerability is very guarded.

5. Lack of Group Spirituality. No matter your model, the goal of a small group should be spiritual growth through relationships. If the group would rather hang out than pray or go over lesson/discussion and forget about accountability and spiritual growth, you have a problem. A small group built around God’s purposes brings people closer to him. It is life-on-life discipleship. We don’t just need friends; we need mentors and accountability partners. Seek to build ways in which your group can help further each other’s spiritual journey. This doesn’t mean that the group doesn’t have fun or have great activities; it just means that the group is intentional in how it builds both spiritual growth and great friendships.

Your success as a small group and small group leader is determined by the way you protect the purpose of the group.

What are some other issues small group leaders must address in their groups?