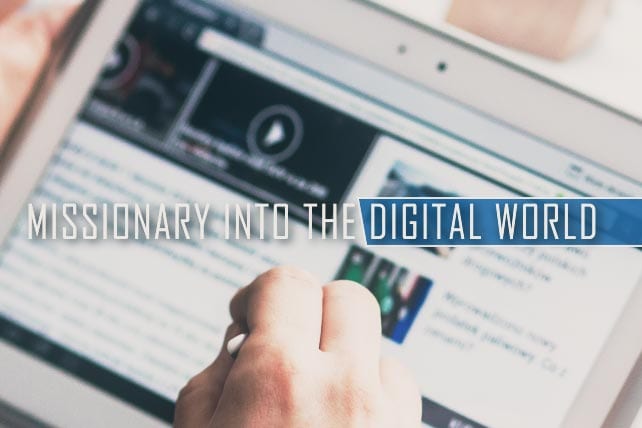 The most popular destination for children online is YouTube. It used to be that when you asked, “Where are the kids?” you were talking about a physical location. Now, it just might be a digital location in a world called Minecraft.

The kids are in places that just simply weren’t places when I was a tiny human. Children don’t know life without the Internet. They don’t know a time when they didn’t have access to the entire history of recorded music. They’ve never experienced the latest release being booked out at the local video store. And just as an aside, the number one song when teens (who are entering college this year) were born … “I Will Always Love You” by Whitney Houston. But this is not an article designed to make you feel old, but instead impress upon you the idea that you and I are immigrants into another culture. We are missionaries trying to reach another world of natives. In fact, the generation born 1995-2009 have been described as “digital natives”—the first global generation shaped by the 21st century connected by devices and engaged in social media. And, there are about 2 billion of them worldwide!

If you are a missionary entering another culture you should know the most important first step … learn the language. I suggest that, as a leader, you see yourself as an immigrant into another world. Ask questions, seek to empathize and understand a perspective on the world that may be different than yours. So how do you go about being a missionary into the world of children?

It’s highly likely your children know another kid/teenager who is on YouTube. As a 10-year-old watching MacGyver on TV I knew that making a show costs a lot of money and I certainly didn’t know anyone making TV shows. It was out of reach, impossible! Today our children not only know that it’s possible that a million people could watch their video in one day, they think they probably could make it.

You cannot afford to not be there. How strange it could seem for a child to see their 10-year-old sister on YouTube but not their 30-year-old kids’ pastor? “Does he not know how to upload video?” they silently ask. The creators rule this generation. As the saying goes: “The haters hate and the creators create.” If you aren’t creating, you’re just consuming. In a world where, as a leader, you believe you must influence lives, you need to be a creator!

One of my goals with Hillsong Kids is to avoid creating dualistic lives where the “church world” children know exists separate and apart from the family/school/friend world which they spend most of their time in. I see a generation of children where the kingdom of God is integrated into every area of a life, every moment of the day.

Let me sum this up: Jesus wants kids to come to Him. Be where they are so you can show them the way.

Even YouTube themselves know that kids are huge users of their service. The greatest development recently is the YouTube Kids app (itunes.apple.com/us/app/youtube-kids/id936971630?mt=8) currently launching around the world. This app is designed just for kids; they can discover, learn and be entertained by videos that are kid approved and family friendly. Parents can now have more control of the YouTube Kids’ experience by adjusting the settings such as, turning off “search,” reducing the chance that children will find content that they don’t want them to watch, or even set a built-in timer to let kids know when it’s time to stop watching.