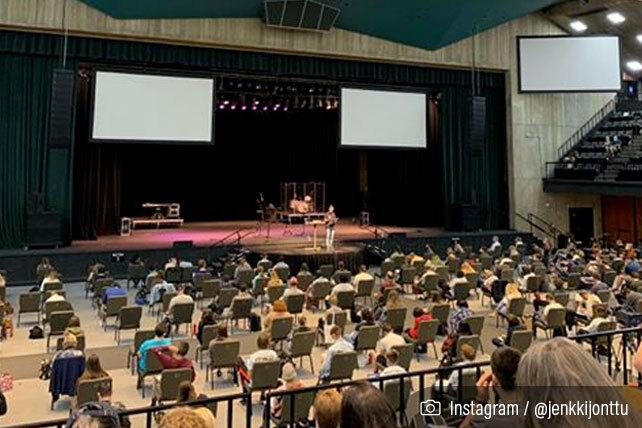 (RNS) — A recent COVID-19 spike in Northern California’s Shasta County has been partly attributed to the Bethel School of Supernatural Ministry, a school operated by the Pentecostal megachurch Bethel in the city of Redding.

Since the county released the number of cases it traced to Bethel School of Supernatural Ministry, church leaders on Wednesday reported that as of Oct. 6, they had traced 137 positive COVID-19 cases among students and staff since school started in early September. These numbers are included in the county’s figures, Bethel said in a statement. Bethel said the church has not been aware of any cases that have required hospitalization.

“We have seen that a primary source of transmission has occurred in off-campus living situations and social interactions outside of school hours that are common to student life,” the statement read.

The county also found that “a large number of the students often live in close contact in communal housing arrangements,” Mapes said.

County health officials are working with Bethel to mitigate the spread, Mapes said.

With the recent rise in cases, Bethel School of Ministry is temporarily shifting to distance learning, Bethel leaders said in the statement. Students have been told to shelter-in-place and have been asked to self-quarantine, “regardless of whether or not they are experiencing symptoms.”

Students have also been instructed to only leave home for essentials and not to participate in social gatherings or visit any local non-essential businesses or public spaces, Bethel said.

Bethel, in an Oct. 1 statement, acknowledged that a portion of new COVID-19 cases in Shasta County were among its students and staff and said the church was in “near-daily communication” with the county health department to slow the spread of the virus.

Bethel said students and staff are required to “wear face coverings at all times, socially distance on campus, self-monitor for symptoms, and undergo daily temperature checks taken at the door.”

Since then, a second round of COVID-19 tests was administered on Oct. 5 for more than 700 staff and students, Bethel said.

In addition, Bethel canceled “Church on the Ball Field” Sunday services from Oct. 4-11 and asked employees who are able to do so to work from home beginning Oct. 5. People will still be allowed on campus, however, but have to adhere to the county’s social distancing and face covering guidelines.

Early on in the pandemic, Bethel church leaders said they were taking precautions in conducting its ministries.

In March, for example, they discouraged Bethel School of Supernatural Ministry students, who evangelize to strangers as they learn to pray and to heal the sick, from visiting health care settings.

While Bethel and other charismatic churches emphasize spiritual gifts such as speaking in tongues, healings and modern-day miracles, church leaders said they also believe in wisdom and modern medicine. While originally under the Assemblies of God denomination, the church now identifies as nondenominational.

“We believe that wisdom, modern medicine and faith are meant to work together, and express the value for each in the pursuit of continued health and healing,” Bethel Church spokesman Aaron Tesauro told RNS in March.

Regardless, Shasta County will have to go through tighter COVID-19 restrictions for businesses due to the surge in cases, according to the Record Searchlight.

Health officials said Tuesday that Shasta County, with a population of around 180,000, reached a new milestone over the weekend as the number of confirmed cases topped 1,000 since March.

The county recorded 167 new cases over the weekend, moving the total coronavirus cases since March to 1,158. This was expected to move the county into a new level of regulations on restaurants, bars, theaters and businesses, county health officials said.

Public Health Director Robin Schurig, in the Record Searchlight, said businesses will have three days to comply and the new restrictions will go into effect Friday.

Schurig said the county could face even tighter controls.