From Christian evangelists to atheism advocates to towering figures in the fight for racial justice, in 2021 we lost influencers who helped us understand, adopt or question religion.

Some notable figures who died this year were not generally known for their faith but nevertheless were privately religious, from Colin Powell, who was described at his funeral as someone who “loved the high hymns” of the Episcopal Church, to Rush Limbaugh, who appealed to Christian conservatives on his popular radio show.

Others worked as journalists of religion for newspapers and television. Rachel Zoll, The Associated Press’ longtime religion reporter, died in May after a career of breaking news, in-depth stories and a feature about a Bible study class called “Finding the Way Back to Mayberry.” Veteran broadcast journalist Bob Abernethy, who also died in May, moved from covering the fledging U.S. space program and the Soviet Union’s collapse to founding the program “Religion & Ethics NewsWeekly” that aired on PBS for almost 20 years.

Here are other prominent figures in the world of religion who died in 2021:

The Polish immigrant who refused to say “so help me God” as part of his oath as a new U.S. citizen advanced religious freedom for atheists wanting to become Americans. During World War II, he spent five years in Nazi concentration camps, The Conversation reported. After the liberation of Dachau, a camp in southern Germany, he was employed as an interpreter before he immigrated to the U.S. in 1947.

As a result of his court battle over not reciting the traditional oath, the U.S. Citizenship and Immigration Services policy manual now includes oath modifications.

A member of Boulder Atheists, he also was known for educating people about the Holocaust and for speaking out against hate prior to the 2020 election. 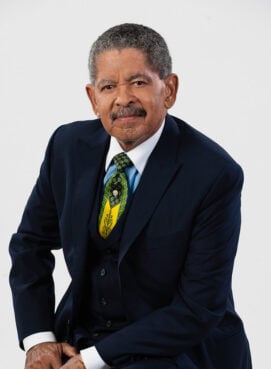 The prominent Los Angeles pastor built one of the largest church buildings in the nation.

He was the founder and longtime pastor of Crenshaw Christian Center, which opened in 1973 and grew to claim 28,000 members. Its building, known as the “FaithDome,” opened in 1989 and seats 10,145 people.

“Multiple services are horrendous,” Price told the Los Angeles Times in 1989. “The purpose of the building is to have one service. And if I can get 10,100 people into one service, that’s more than we’re doing now.”

The charismatic preacher, who was known for his prosperity gospel message, was featured on “Ever Increasing Faith,” his long-running television show.

After his retirement as Crenshaw Christian Center’s pastor, Price turned the pulpit over to his son, Frederick K. Price Jr.