(RNS) — Over the weekend, red-shirted members of NatSoc Florida, a new white supremacist group, gathered outside a “Celebration of the Arts” event in Lakeland, Florida. There to protest a drag show that was part of the event, the men waved Nazi flags and signs scrawled with hate speech, such as one that read “Drag queens are pedophiles with AIDS.”

Later, the men stood for a photograph while giving a Nazi salute. Three of them held a large emblem as they did so: a Christian flag.

It was one of at least three incidents over the weekend where extremism and faith intersected, with hate groups and their supporters invoking God while giving voice to virulent anti-LGBTQ sentiment.

In Columbus, Ohio, several right-wing groups descended on a sidewalk outside First Unitarian Universalist Church of Columbus, where Red Oak Community School — which rents space from the church — was slated to host a “Holi-Drag Storytime.” The event was canceled, but hate groups showed up anyway, including members of the white nationalist group Patriot Front as well as the violent far-right group Proud Boys. According to footage of the protest, standing near Proud Boys were a separate group of men in military fatigues who brandished firearms. A few yards away, members of a “White Lives Matter” chapter gave Nazi salutes and waved Christian flags next to a banner that read “Groomers not welcome,” a term adopted by anti-LGBTQ advocates and often used when condemning activities involving LGBTQ people and children.

One sign read: “Unitarian is Scientology for poor people.”

On the other side of the street, a counterprotester held a sign that decried Proud Boys as “fake patriots” and “fake Christians.”

In other footage from the day, a small gaggle of religious protesters — who do not appear to be affiliated with the right-wing groups — is seen feuding with supporters of the drag event. After an exchange, a woman with the religious group declares: “The Scriptures do say to hate.” 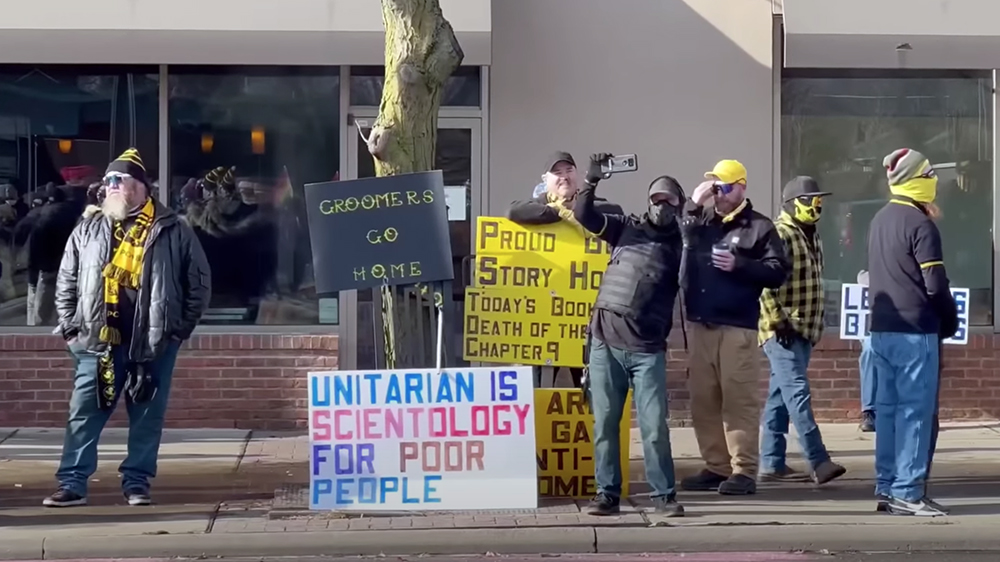 “The armed right-wing agitation in Columbus is antithetical to our fundamental moral UU value of the human dignity and worth of every person,” she told Religion News Service in a statement. “Their action was abhorrent because it only sought to oppress the freedom of expression of the LGBTQIA+ community. Unitarian Universalists will continue to affirm our LGBTQIA+ friends, neighbors, and loved ones and fight to protect our rights to support and love them.”

Meanwhile, in North Carolina, an ongoing debate over a drag show exacerbated tensions surrounding an attack on the power grid in Moore County. Weeks before the show, the Facebook group of Moore County Citizens for Freedom, which is run by former U.S. Army psychological operations officer Emily Grace Rainey, posted a message listing the sponsors of the show and their contact information. Above it was the caption, “You know what to do.”

When two different power substations in the region were destroyed on Saturday by gunfire, in what law enforcement officials are calling a targeted attack, the resulting outages cut power to a broad region that included the drag show, which was taking place at the time.

Local law enforcement later told reporters they have not yet uncovered evidence directly tying the attack to the drag show, but Rainey declared on Facebook that evening that “the power is out in Moore County and I know why.” Rainey, who was investigated by the Army after she brought a group to Washington, D.C., on Jan. 6, 2021, to participate in the rally that preceded the Capitol insurrection, also posted an image of the theater where the drag show was taking place alongside the caption “God will not be mocked.”