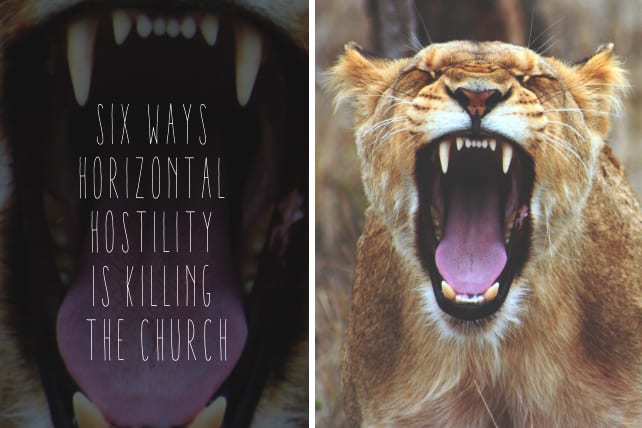 Horizontal hostility is a sociological phenomenon used to describe infighting or factionalism within a minority movement. Rather than banding together, subgroups snipe and fight with each other.

It’s that weird thing that happens in small subcultures—when outsiders look in, they can’t believe the groups fighting each other. Some humorous examples would be:

To people outside these subcultures, these differences seem almost comical or trivial. But to the people in the midst of these communities, the differences are huge and define who they are. In fact, as these subcultures become more enthusiastic and entrenched in these turf wars, they end up looking more and more bizarre to the general public.

There are times when the consequences of horizontal hostility are even greater and have a deep impact on social change movements. For instance:

In recent years, this behavior has accelerated because it is now possible for these subgroups to self-organize on the Internet. The dark side of finding a community online is that groups can continue to splinter into smaller and more passionate subgroups, having even more stringent rules defining who’s in and who’s out.

This behavior is pervasive within the church too, and it’s killing us.

The widespread impact of “horizontal hostility” on the Body of Christ is accelerating our collective irrelevance and paving the path toward the decline of the church.

Unfortunately, it’s relatively easy to find examples of this behavior online. Even a quick search can find fresh examples of Christians within relatively similar communities of the evangelical Christian world sniping at someone else within our same community. Here are some examples:

All this arguing among ourselves would be interesting parlor conversation if the broader church was having widespread impact but it’s really the opposite that’s true. We don’t have that luxury anymore.

Ninety-four percent of churches are losing ground against the population growth of their communities.

By 2050, the percentage of the U.S. population attending church is estimated to be half that of 1990. [ref]

The Church is caught in a dramatic downward spiral and rather than banding together, we’re scattering farther and farther apart. At the very moment when we need to see the commonality of our fellow Christ-following brothers and sisters, we’re actually fracturing into smaller and smaller subsets with decreasing impact and effectiveness.

Where are the unifying voices of the church looking to find common ground among broader movements to build consensus and agreement toward the end of getting people to come into relationship with Jesus? Billy Graham unified a community of “progressive fundamentalists” who would go on to call themselves “evangelicals” and reach millions with the message of Jesus. [ref] They stood up against the fringe voices among themselves who wanted to divide and split hairs rather than accomplish their common desire to see people encounter Christ. Those days seem like distant faint memories or maybe even worse, like something off the Andy Griffith show from so many years ago.

Can we stop thinking we’ve got it all figured out?

These verses haunt me as I think about people in church leadership. Look closely at what Jesus is saying here in this passage. I wish it were more obscure and hard to understand. The fact that it is so straightforward is what makes it so powerful.

Jesus is saying that there are people who are going to have amazing ministries but they are somehow doing it apart from him.

That message should cause us all to walk humbly. If you read that and your mind jumps to other people who you think Jesus is talking about…repent. That’s a message for all of us to walk closely with the Lord and keep our relationship fastened to him tightly.

It’s not a weapon for you to lob at that other church across town. Seriously.

I’d love to hear from you. Where do you see this at work? What am I missing? Where is my blind spot in this? How do I need to learn and grow?