The Eastern Gate is not the original from Jesus’ time, but this gate stands on or near the location of the one Nehemiah built. The original gate provided the nearest entrance to the Temple and is likely the gate Mary and Joseph used when they brought baby Jesus to be dedicated. According to Jewish tradition, this gate is also believed to be where Christ will enter the Holy City during His triumphant return.

Where Jesus Was Dedicated: the Temple in Jerusalem

After Jesus was circumcised, Mary and Joseph brought him to Jerusalem to fulfill the requirements of the law and to dedicate Him to the Lord (Luke 2:23). They would have likely brought Him up to the temple complex by way of the East Gate, which offered the most direct access to the temple. Passing through the gate, they would have quickly arrived in the temple courtyard and met an old man named Simeon, who took the baby and praised God with holy wonder saying, “My eyes have seen your salvation” (Luke 2:30).

Today’s Eastern Gate is not original from the time of Christ, but it sits over the same vicinity as the gate Nehemiah built. The Muslims sealed the Eastern Gate in the sixteenth century, fearful of Old Testament prophecies and believing that a sealed Eastern Gate might somehow deter the Jewish Messiah from returning to reign. Here at the steps of the gate, Christians still gather, singing worship songs and reflecting on the Savior who entered the temple. Where Jesus Grew Up: Nazareth

Back in Nazareth, Jesus, the boy, grew in wisdom and knowledge. Currently, Nazareth is home to about 80,000 people, but the village of Jesus’ boyhood was only 400 to 500 people. Here, He probably learned building skills—carpentry and stonework—from His father. A first-century wine press still exists in Nazareth and likely was a place Jesus knew and visited. It may have been in His mind when He later told a parable saying, “A man planted a vineyard and put a fence around it and dug out a pit for a winepress and built a tower” (Mark 12:1).

Modern Nazareth is a Palestinian town in Israel and is about 20 percent Arab Christian. A first-century wine press still exists in Nazareth and likely was a place Jesus knew and visited. It may have been in his mind when he later told a parable saying, “A man planted a vineyard and put a fence around it and dug out a pit for a winepress and built a tower” (Mark 12:1). 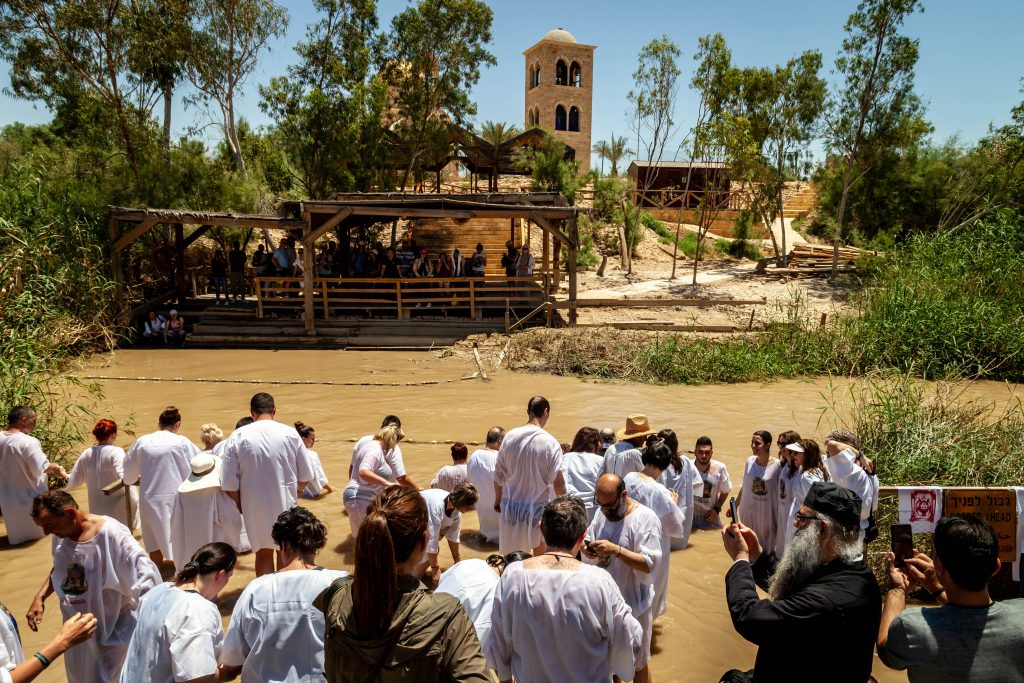 Orthodox Christians enter the waters of the Jordan River near the Qasr al Yahud crossing. Across the river is the Jordanian border.

Where Jesus Was Baptized: Jordan River

John the Baptist baptized repentant sinners in Bethany across the Jordan. It was here John also baptized Jesus and proclaimed, “I have seen and have borne witness that this is the Son of God” (John 1:34).

The point of the Jordan River traditionally associated with Jesus’ baptism is narrow and muddy. On one side of the river is the Palestinian-controlled West Bank, and on the other side is the country of Jordan. First-century pilgrims sketched crosses on sandstone walls that still stand nearby. Today, visitors don baptismal robes and enter the muddy water to be re-baptized. Mt. Precipice is the high place outside of Nazareth believed to be the site from which the Jewish leaders tried to throw Jesus after He revealed His divinity.

Shortly after Jesus began His ministry in Galilee, He returned to His hometown of Nazareth and entered the synagogue on the Sabbath to read Scripture as He always did. He unrolled the scroll and, after reading about the Messiah from Isaiah, said, “Today this Scripture has been fulfilled in your hearing” (Luke 4:21).

In first-century Israel, there were two reasons for executing people. The first was a criminal offense, paid for on a cross. The second was for a religious offense. If someone claimed to be a prophet, he was tied up and pushed head-first from a cliff. The townspeople who saw Jesus grow up were so enraged by His claim to be the Messiah, they drove Him to a cliff to cast Him off. “But he passed right through the crowd and went on his way” (Luke 4:30).

Precipice Hill in Nazareth is the traditional location of this violent mob’s execution attempt. One short drive outside the city, and you’ve got a stunning vista of Nazareth from the top of this cliff. Locals and tourists alike come up here for a quiet getaway from the city and a stunning overlook of the city. Church of St. Anne in the Muslim Quarter of Jerusalem’s Old City is one of the best-preserved Crusader constructions in Jerusalem. The present church, a Crusader basilica from AD 1140, was built over a previous church constructed around AD 450 on the supposed site of Mary’s parents’ house. Unlike most other Christian structures, the Crusader basilica escaped destruction during the Muslim Conquest of 1189.

Early in Jesus’ ministry, He traveled to Jerusalem for a Jewish festival. The Bethesda Pools were a short walk from the Sheep’s Gate (the modern-day “Lion’s Gate”) and on the way to the temple. The first pool was built to hold runoff water hundreds of years before Christ, and a second pool was added later. People collected water here for daily living and washed animals to be used for temple sacrifice. Those with disabilities waited for a supernatural experience of healing in the waters.

The pool ruins are deep and extensive, easily bringing to mind the scene that unfolded in John 5. Adjacent to the pools is Saint Anne’s Church, a Crusader church built over the traditional site believed to be the home of Mary’s parents, Joachim and Anne.