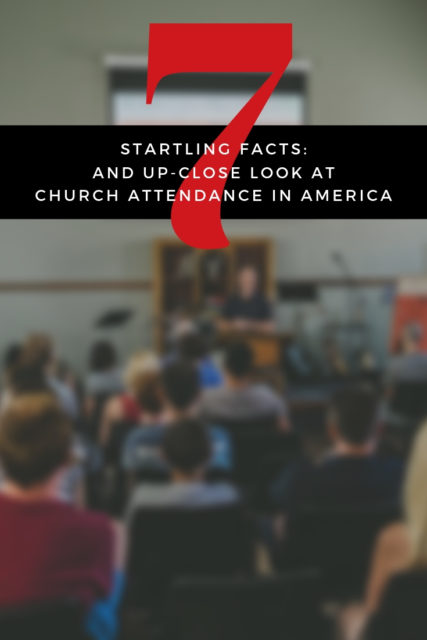 In 1990, 20.4 percent of the population attended an Orthodox Christian church on any given weekend. In 2000, that percentage dropped to 18.7 percent and to 17.7 percent by 2004. Olson explains that while church attendance numbers have stayed about the same from 1990 to 2004, the U.S. population has grown by 18.1 percent—more than 48 million people. “So even though the number of attendees is the same, our churches are not keeping up with population growth,” he says.

Well-known church researcher and author Thom Rainer notes that the failure of churches to keep up with the population growth is one of the church’s greatest issues heading into the future. In a 2002 survey of 1,159 U.S. churches, Rainer’s research team found that only 6 percent of the churches were growing—he defines growth as not only increasing in church attendance, but also increasing at a pace faster than its community”s population growth rate. “Stated inversely, 94 percent of our churches are losing ground in the communities they serve,” he says. 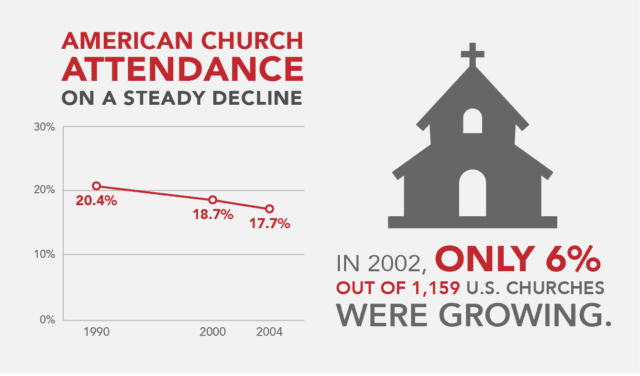 A breakdown of overall attendance percentages by church type shows decreases across the board in evangelical, mainline and Catholic churches.

The most significant drop in attendance came at the expense of the Catholic Church, which experienced an 11 percent decrease in its attendance percentage from 2000 to 2004. Next, and not far behind were mainline churches, which saw a 10 percent percentage decline. Evangelicals experienced the smallest drop at 1 percent.

Though scholars are hesitant to definitively acknowledge a decline, they do say that church attendance is not increasing: “There’s no good evidence to suggest that overall church attendance has gone up in the recent decade,” Chaves says, adding that he believes there has been a decline. He cites the watershed book Bowling Alone (Simon and Schuster) by Harvard sociologist Robert D. Putnam as his primary reasoning.

“I think church attendance is a close cousin to the other kinds of activities Putnam says Americans are doing alone—indicating that Americans have become increasingly disconnected from family and friends,” Chaves says. “So if all those areas are going down and church attendance isn’t, that would be odd.”

He identifies various implications declining church attendance may have for church leaders: “If this is the reality, then I see a trend toward people being less involved, while maintaining a connection to the church. Maybe a pastor used to be able to count on seeing someone every week, but what’s now happening is that people’s lives are busier and they’re attending more infrequently. So church leaders can’t count on these same people to teach Sunday school, serve on committees, etc.”

Recent data from The Barna Group (barna.org) indicates just the opposite. Church attendance is actually growing, company President George Barna says—climbing slowly from 1996s 37 percent to 47 percent in 2006. His research shows that other core religious behaviors are also up.

“The data shows the number of unchurched people is unchanged—76 million adults,” he says. “And 47 percent of Americans reported to us that in the last seven days, they attended a church service, excluding weddings and funerals.” His research indicates that attendance at house churches has also spiked. That may explain, Barna says, why these core religious behaviors are up. “Nevertheless, people are seeking God.”

Ed Stetzer, missiologist and director of the Center for Missional Research at the North American Mission Board (namb.net) of the Southern Baptist Convention, has found similar evidence of spiritual behavior occurring outside church walls. He recently finished a study on alternative faith communities, and found that a growing number of people are finding Christian discipleship and community in places other than their local churches. The study found that 24.5 percent of Americans now say their primary form of spiritual nourishment is meeting with a small group of 20 or less people every week.

“About 6 million Christians meet weekly with a small group and never or rarely go to church,” Stetzer says. “There is a significant movement happening.”