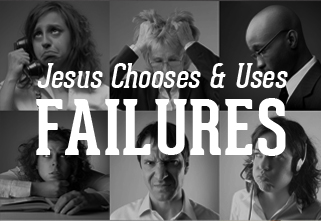 Peter was grieved. Sitting on the beach after breakfast, Jesus had just asked him for the third time if he loved him. Peter had already wholeheartedly answered yes twice. What else was he supposed to say?

With these questions, the Lord was putting his finger on a very tender wound in Peter’s heart. Peter’s failure on the night of Jesus’ trial had been simply horrible. In the hour of his Lord’s greatest anguish, Peter had denied even knowing him. This sin shook Peter to the core of his being.

Jesus had told him that he would do it. But in the Upper Room, over the Passover meal, with his fellow disciples around him, Peter did not believe it. He could still hear himself proclaim, “I will lay down my life for you.”

He had had no idea how weak he really was. He had imagined himself boldly standing before the Sanhedrin side by side with Jesus, come what may. But that night, as Jesus was doing that very thing, Peter couldn’t even stand before a servant girl. “You also are not one of this man’s disciples are you?” He had completely caved: “I am not.”

I am not. Those words had kept Peter up at night. He was supposed to be a rock. That night he had crumbled into pieces. He was not who he thought he was. Peter had never been less confident in himself.

So when Jesus questioned Peter’s love for a third time that morning, Peter grieved that he might have lost the Savior’s trust. He had failed. But he did love him. All he could do was appeal to Jesus’ omniscience:

“Lord, you know everything; you know that I love you.”

And Jesus did. In fact, later Peter realized what Jesus had done in that painful conversation. He had not doubted Peter’s love at all. Rather, he had allowed Peter to confess his love for every wretched denial he had made on that dreadful night. Amazing grace.

And the Lord had a word for Peter. In the future, there would be another opportunity to confess his love publicly in the face of great cost. And then he said, “Follow me.”

Shame over past failures and sins can haunt and inhibit us in many ways. And Satan seeks to steal and destroy our faith by shoving our failures in our face. But Jesus intends to redeem us completely.

When Jesus chose you to be his disciple, he foresaw your future failures as sure as he foresaw Peter’s. We may not want to believe that we could deny Jesus by engaging in a sin that contradicts everything we believe. But Jesus knows what is in us. So he exhorts us along with Peter to “watch and pray that you may not enter into temptation. The spirit indeed is willing, but the flesh is weak.”

And when we do fail, we must remember what Jesus said to Peter before his failure: “I have prayed for you that your faith may not fail. And when you have turned again, strengthen your brothers.” Peter was going to sin — miserably. But Jesus had prayed for him. Jesus’ prayer was stronger than Peter’s sin, and it’s stronger than our sin, too. “He is able to save to the uttermost those who draw near to God through him, since he always lives to make intercession for them.”

And Jesus is the great restorer of failures who repent. Jesus had said to Peter “when you have turned again [repented], strengthen your brothers.” And there on the beach he again gave Peter the greatest invitation any of us can receive on Earth: “follow me.” The failure was to be left behind. There was kingdom work to do and eternal life to enjoy.

Peter’s failure did not define him. And ours will not define us. They are horrible, humbling stumbles along the path of following Jesus, who paid for them all on the cross.

And Jesus specializes in transforming failures into rocks of strength for his church.