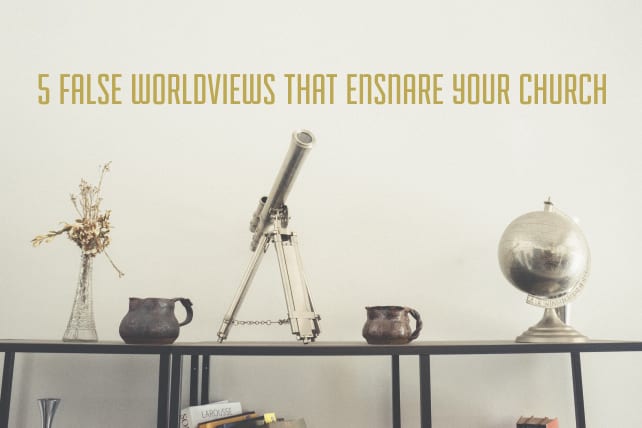 In professional tennis matches, the ball moves so quickly that players have to swing at it before their conscious minds have time to process what’s happening. I asked a friend who played against many world champions how winning tennis players mastered this. He explained that through thousands of hours of practice they learn to recognize subtle signs given off by their opponents, and fine-tune their reflexes to respond.

The same is true in today’s battle of ideas. Culture rapidly fires fake worldviews at us that are contrary to God’s word. If we don’t know how to recognize these worldviews or respond quickly enough, we risk being taken captive by hollow and deceptive philosophies (Col. 2:8).

According to new research commissioned by Summit Ministries and conducted by the Barna Group, Christians today are losing this battle of ideas. But they don’t have to. Through a four-step process, we can alert believers to five fake worldviews that target them, and help them regain spiritual vitality.

How to Spot Bad Ideas Before They Catch Us Unaware

A worldview is our view of God, humanity and the world. A biblical worldview shows us what God is really like and where to turn for true answers to our big life questions.

But fake worldviews trick us into looking for answers in all the wrong places. They’re everywhere—on television, in books and magazines, at the movies, and in conversations with friends and family. We absorb them like we catch colds. We don’t even know we’re sick until it’s too late.

Through surveys done over the last 20 years, researchers at the Barna Group have studied the worldview of church-going Christians. They’ve discovered that fewer than one in five of them has a worldview based on the Bible.

At Summit, we wondered, “Where do Christians get their worldview, if not from the Bible?” Here are a few of the most common fake worldviews that creep into the minds of Christians today.

Fake worldviews ruin people’s lives, leading them to wrong values and harmful practices. In the research Summit commissioned with Barna, we asked questions about the influence of the five fake worldviews I had written about in my Understanding the Times Worldview Library:

Secularism – the belief that the material world is all there is, and that God is irrelevant to what is important

Postmodernism – the belief that we should be suspicious of anyone who claims to know the truth, because none of us have access to it

New Spirituality – the belief that reality is spiritual, not material, and that what you do in this life will come back to you, whether good or evil

At Summit, we picked these five worldviews because of their enduring influence and because they summarize the basic religious commitments of probably 95 percent of the population in the West.

So what do Christians believe? We found that:

We surveyed people from different Christian traditions and ethnicities who live in every region of America, in both rural and urban communities. Fake worldviews are influential everywhere. What lessons can we learn from this?

Two Lessons for the Future of the Church

Lesson One: Today’s Christians suffer from a “Multiple Worldview Disorder.” Just as some people have multiple personalities living inside their brains, believers tend to mix and match their ideas. Often they hold contradictory beliefs.

Lesson Two: Post-Christian America is a Reality. Using age 45 as a dividing line, we found a stark difference in worldview between Millennials and Gen-Xers on the one hand, and Baby Boomers and Elders on the other. On some questions, younger Christians were up to eight times more likely to accept fake worldviews.

For years Christian thought-leaders have warned us that we’re on the brink of a post-Christian era. This study seems to show that we’re toppling over the edge right now.

How to Stop Unbiblical Ideas and Fake Worldviews

In my book The Secret Battle of Ideas about God, I show how to combat fake worldviews by thinking of them as viruses that trick us into living lives that are contrary to the teachings of the Bible.

The virus analogy helps because when faced with potentially catastrophic outbreaks, doctors have learned how to take four decisive steps to curb a virus’s growing impact. I call these steps the four I’s—Identify, Isolate, Inform and Invest.

The four I’s work with idea viruses, too. We can teach believers how to:

Inform others of how to find love, healing, purpose, peace and hope through Jesus

The goal of the Barna-Summit survey is not to condemn people or put them in boxes. Rather, it is to understand the patterns of the world so we can be transformed by the renewing of our minds (Romans 12:2). We are all at risk, but we can know the truth, and the truth will set us free (John 8:32).