If your church is planning a new construction or renovation project, you may have already discussed what you want to build and why, but one big question still lingers…how do we begin? There are a number of critical decisions to be made and the road ahead can seem overwhelming to a ministry. Each of the steps required in a project’s journey to completion are important in determining how successful the project will be.

One of the most crucial steps in the early stages of planning for a church building project is choosing the right project delivery method. Each delivery system has its characteristic advantages and disadvantages depending on the type and size of the project. It is important to choose a delivery method that best meets the unique needs of your organization.

Choosing the best delivery method for any project must start with a good understanding of the available choices. Owners must also have a firm grasp of the impact of each choice, because the delivery method establishes the foundation of contractual relationships, when parties become engaged, as well as how changes and modifications are made throughout the project and what the impact of those changes are on project costs. To freshen up the look of your church, don’t forget to bring in new elements such as those church chairs.

The following is a comparison of the advantages and disadvantages of the two most common delivery methods – design-bid-build and design-build – along with an introduction to a more integrated option that is a hybrid of both models, created exclusively for ministry organizations.

One of the biggest advantages to this model is that by putting the project out to bid, you are ensuring that the open market provides you with competitive bid options. However, there are 3 distinct disadvantages to this delivery model, particularly for ministry organizations:

3 Disadvantages to the Design-Bid-Build Delivery Method

Typically in this contracting method, the GC is obtained through a bidding process once drawings are completed. Therefore, the design is completed without construction input, so the architect has limited ability to establish an accurate cost estimate early on. As a result, true cost information is discovered far too late in the process, leading to a frantic process of trying to pull things out of the project to reduce costs – and typically not getting true dollar value from the things being eliminated. It is a common scenario and one that can be difficult to get through at a critical stage of the project.

Bidders in the design-bid-build model have learned to “play the game” by providing an extremely low bid and not bringing potential changes or mistakes in the plans to the attention of the architect or owner during the bid stage. The whole approach is set up to exploit unclear information or conflicts in drawings. Questions that may come up during the bid phase of the project are not often asked, unless the bidder feels like it could put them at a competitive disadvantage. Instead, bidders create margin for themselves by leveraging change orders throughout the project to procure additional income, which drives the cost of the project up and causes scheduling delays.

The DBB method is also often associated with general contractors “buying out” the project, meaning that once awarded the project for an agreed price and scope of work, they will renegotiate with the subcontractors behind the scenes to increase their margin. This can heighten the need for subcontractors to press hard for change orders, since they are often entering the process more stressed financially than the owner will know about. This buying-out process will often lead to providing a financial cushion to the general contractor and whatever savings they are able to find during the course of the project is not offered back to the owner but instead taken as an advantage to the GC. This process leads to everyone on the project working for their own advantages instead of placing the needs of others first.

The Design-Build Delivery Model re-emerged in the 1980’s, born out of the frustration that came from the DBB process. The goal of this method was to alleviate some of the conflict and litigation that occurs between parties in DBB, which has typically been referred to as “combat construction”.

In today’s version of Design-Build, an architect and general contractor will form a single contract to provide one unified flow of work from initial concept through completion. The design-build company typically has an on-staff architect that designs the project and then proceeds to build it. However, the potential risks of Design-Build to ministry-based organizations are as follows:

3 Disadvantages to the Design-Build Delivery Method

In the Design-Build model, The Owner assumes the risk of a single contract with one design-build organization and the architect becomes, in essence, a subcontractor of the GC. While some design elements may be specified by the architect, typically the contractor is given more flexibility in design and the architect does not have as much insight into the design details. As such, the owner will lose some control of the design process. The architect’s primary responsibility is to Health/Safety and Welfare, but in matters of cost control they will remain silent as it is left to the at-risk partner in the relationship to deal one on one with the owner on matters of cost. This can leave the owner vulnerable in some situations, since the architect does not play the same role to the owner as an independent, trusted advisor.

Many Design-Build contractors also suggest to owners a “shared-savings” plan that provides a split in saved funds between the owner and the contractor. This can lead to manipulation of the original cost basis for the project, which is not in the owner’s best interests. While DBB tends to bring a certain “check & balance” to the approach, Design-Build can at times leave an owner feeling like they are at a disadvantage with a GC that has too much control in the process.

The number of competitive bids received will overall be less using this form of contract method. Competitive bids may be sought but behind the scenes the lowest price coming from an unknown subcontractor may be disregarded if the GC feels like they are at risk with that low-bidder. For this reason, Design Build General contractors typically develop long term relationships with subcontractors and use them exclusively for their projects. Long time loyalties often lead to complacency in pursuit of the best value and bids can sometimes be manipulated. Although costs in a Design-Build process tend to be more predictable, it typically will cost 10-15% more than DBB.

Design-Build offers the owner an opportunity to participate in a value engineering process during the design phase, as the GC coordinates with the designer to choose building systems and finishes that will match to a certain budget. This is a good thing for an Owner. However, since value engineering suggestions are sought during the design phase, the ideas often come with strings attached or a commitment to a particular subcontractor despite the competitive bid process, which can exclude the possibility for other bright minds to weigh in on cost-effective approaches.

A unique hybrid approach called The Trinity Partnership offers the best of the design-bid-build and design-build approaches while avoiding the inherent downsides of these standard delivery methods. In the Trinity Partnership, the architect and builder are aligned from the very earliest stages of design, but unlike other models, both parties are separately contracted with and accountable to the owner.

At the beginning of every project, the owner, architect and contractor enter into a covenant relationship and agree to handle any issues that arise during the building project in a uniquely different way than the world handles them. With God in the center of the relationship, this approach seeks to transform the job site by reducing conflict, scheduling delays and change orders, resulting in significant cost reductions.

Unlike most standard design and construction approaches in which the architectural plans are completed and then sent out to contractors for bid, the Trinity Partnership allows for a unique process to explore the plans at a much deeper level with the subcontractors prior to receiving their final bid.

During this process called Pre-Construction Stewardship, many ideas for savings are generated and then incorporated into the final drawings. In addition to value engineering ideas, this process allows the architect to make the necessary changes to the industrial architecture design and construction documents that can clear up any confusion and significantly reduce or eliminate change orders.

The Pre-Construction Stewardship process also helps to identify and leverage construction industry relationships that the ministry might have in the local community that can lead to additional value added to the project in reduced mark-up or gifting of materials or labor.

The Trinity partnership was developed by Building God’s Way as a cooperative, transparent partnership of equally yoked, like-minded and like-hearted design and construction partners. They are specifically joined together with the owner to bring into reality God’s vision for that particular ministry. Together they are fully focused on seeking outstanding quality while being good stewards of the funds that God has entrusted to them. 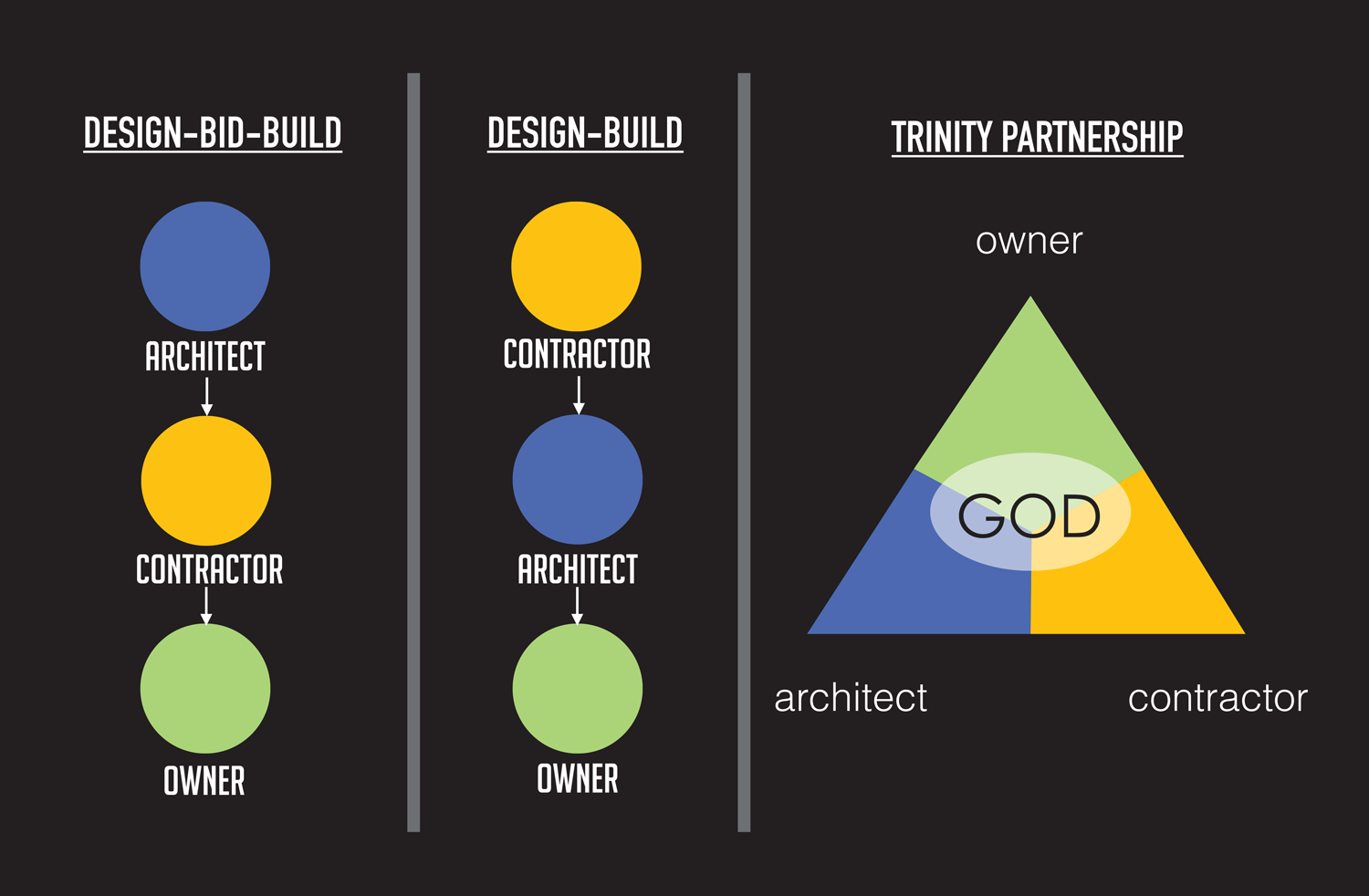 To learn more about this unique hybrid approach and the advantages it can offer to churches and Christian schools, contact us today to schedule your free consultation!

7 Types of Questions to Ask During an Interview

3 Places Your Pastoral Skills Must Be at Least Average

I HATE Bad Policies – Don’t You?

3 Ways a Disorganized Leader Holds the Team Back