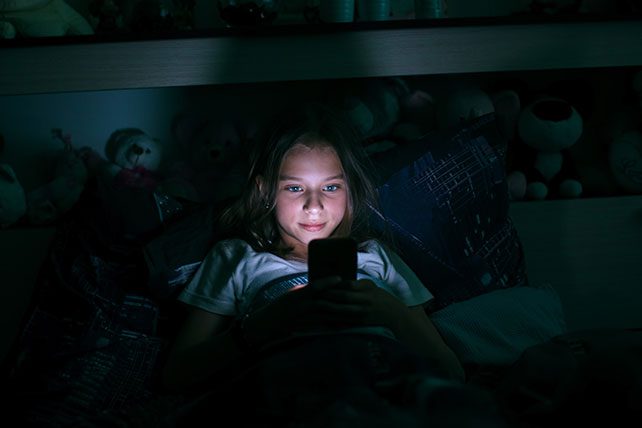 “My daughter is thirteen years old, and she doesn’t have a cell phone.” I said those words from the platform at a women’s event and was surprised at the sharp intake of breath all over the room. I am not naive enough to think that my daughter isn’t a bit of an anomaly. I know that most kids her age are already well versed in the ways of social media, texting, and the big world that a cell phone provides. I know that when she leaves school for the day, dozens of conversations are happening via Instagram, Snapchat, and text that she isn’t privvy to and that she doesn’t ever learn about, except when they are hinted at at the lunch table, where she simply smiles and nods even though she is probably somewhat lost as to what ideas transpired between her friends at ten o’clock the night before.

But, it does surprise me to learn that many parents feel that they don’t have the option to hold off on providing a cell phone for their kids. The day that I made my shocking confession, the attitude of the fellow moms in the room seemed to be: She doesn’t have a cell phone? You can DO that?

Why yes, you can. And I would argue that in most cases you should.

Now, before you start thinking that our children are living in the dark ages, we do have electricity and running water. And our two older kids have iPods. They don’t have internet access or texting privileges with their friends, but they are allowed to FaceTime and text their grandparents and cousins.  They play games on their iPods and make movies and learn to take and edit photos and generally get a lot of fun benefits of technology through their devices. I’m not anti-technology. But, I am a believer in the benefits of sheltering my kids from social media and unfettered internet access. Yes, I said sheltering. Contrary to popular opinion, kids do need sheltering from some things.

A few days ago a couple of moms with younger kids asked me about our oldest’s cell phone, and when I told them that she doesn’t have one they said, “We were hoping you could tell us how you navigate the whole technology and social media world with your kids.” So, this isn’t really for the parents whose kids already have a phone, although I hope that it will help you think through some of the issues associated with phone use. It’s for those of you who are wondering how you are going to approach this subject with your kids when they get older. Essentially, I’m going to explain some reasons that Chad and I have decided to delay our kids’ access to phones.

4 Reasons My Teenage Daughter Doesn’t Have a Cell Phone

1. The Internet is a huge world full of strangers who can step into your home without your invitation.

Many times we have a false sense of security about the internet. We think of it as a tool when the reality is that it is an enormous collection of people that we do not know. I would never encourage my kids to go find a stranger at the grocery store and hang out in a private room with him, but in many cases this is what the internet leads our kids to do. It can be a very dangerous place where predators and people with bad intentions can learn all kinds of information about our kids. It can be a place where people we don’t know can have tremendous influence over our kids’ thinking and feelings.

When we present phones to our kids, we expect them to try to navigate this complicated online world before they have the cognitive abilities to make sound decisions. Studies show that their brains are literally underdeveloped in terms of decision-making until they are around age 25. So, imagine how inept a fifth or sixth grader’s brain is at understanding how to react to the various situations that could arise in the huge internet world filled with strangers.

2. The Internet is a big world of people your child knows who can step into your home without your invitation.

When you are a middle schooler, no world seems bigger than the one you’re living through in the seventh or eighth grade. Phones allow that world to have access to kids 24 hours a day. I like the fact that my home is a sanctuary for my kids. The only kids allowed within these walls are those kids that I invite, and that is important for the mental and emotional health of my children.

If they were to have a terrible problem with someone at school, if they had an issue with a bully or a group of “friends” who has suddenly turned on them, if something embarrassing were to happen at school that day, my kids know that when they walk to my car as the bell rings, they are free from all of that, at least until the next morning when they set foot back on campus. They don’t have to worry about the bullying following them home. They don’t have to worry about receiving mean texts or having someone post something horrible on their social media accounts.

Even if there are no issues at school, if there is absolutely no drama happening, I enjoy knowing that school and daytime hours are for friends and after school and nighttime hours are for our family. Your child’s time at home needs more protecting than you probably realize. Constant socializing on the internet is leading to all kinds of problems in kids, including lack of sleep, depression, and even suicidal thoughts. They don’t need constant connection with everyone. They need a real connection with their family at the end of each day. Phones make that harder to accomplish.

3. The Internet encourages kids to brand themselves.

I’m always running across funny collections of terribly photo-shopped pictures that teenagers have put on the internet. It makes us laugh, but the truth is that kids feel pressure to create a certain image of themselves on social media. It’s the same reason that so many take and post ten selfies a day. They are looking for approval and are trying to build a brand. They want their name to be associated with beauty or fitness or sexiness or casual coolness or whatever it is that they think will gain them likes and followers and the attention that they crave.

For kids, the work of figuring out who they are and who they are striving to be is only complicated by social media. They can become obsessed with themselves, their image, their approval ratings. And the last thing a middle schooler needs help with is being obsessed with herself. Delaying the dive into social media gives kids a chance to grow an understanding that the internet is not real life. It can be a fun place to play, but not a place to live. And if we give our kids more time to develop a real sense of themselves, of who they are and what their own standards are, then they are less likely to become obsessed with how they are seen on social media. They won’t see themselves as a brand but as an authentic person who is much more than a one dimensional image on a screen.

It practically goes without saying that pornography is a huge issue with phones, and one that isn’t taken seriously enough. Some studies now suggest that the average age of first exposure to porn is nine years old. Third grade. I’m in no rush to put that industry into the hands of my children, even with filters and accountability software, especially since pornographers are actively targeting kids to ensure that their industry continues to thrive. Pornography addiction deeply affects the brain, body, heart and spirit, and phones are the easiest way for the industry to reach kids, either through their own phones or through someone else’s.

There are so many other issues that I haven’t touched on here, but these are a few of the reasons that Chad and I are waiting to provide a phone to our oldest daughter. I don’t know when we will feel that the time has come, but I pray that she will have time to grow in Christ, learning her own heart and mind, before she delves into the social media realm. I pray that she will develop decision-making skills that will help her not to be enticed by requests for photos. That will give her wisdom that keeps her from texting things about people that she will later regret. I pray that she will learn to be led by the Spirit instead of being led by an obsession with self or an obsession with the approval of others.

I know many of you reading this have given your kids phones and have done so with great foresight and discernment. I know that many of you have safeguards in place and monitor your child’s phone usage and are beautifully navigating the internet world with your kids. Those of us who aren’t there yet will need lots of guidance from you.

To those who have younger kids, I ask you to consider some of my reasons for holding off on giving our kids phones. You don’t have to hand your child a phone just because others do. I’m convinced there are great benefits in waiting until kids have matured a little, have grown in their relationship with Christ a little more, have a firmer grasp of who they are and what they believe, before they really need to be grappling with the complicated world of the internet. Life is simpler without that constant din of the world in your kid’s pocket. Your teenager doesn’t have a cell phone. I’m in no rush to invite the noise in.

This article on why my teenager doesn’t have a cell phone originally appeared here, and is used by permission.