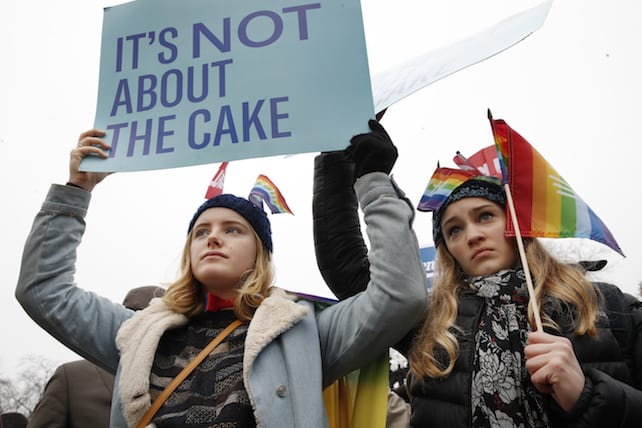 By a vote of 7-2, justices on the U. S. Supreme Court sided with a Colorado baker who refused to bake a cake for a same-sex couple citing his religious beliefs.

The court found that Jack Phillips, owner of Masterpiece Cake Shop, did not get a fair hearing on his complaint because the Colorado Civil Rights Commission demonstrated a hostility to religion.

Writing for the case, Justice Anthony Kennedy said that while it is unexceptional that Colorado law “can protect gay persons in acquiring products and services on the same terms and conditions that are offered to other members of the public, the law must be applied in a manner that is neutral toward religion.”

The Supreme Court heard oral arguments this week in the case involving a Colorado baker who refused to bake a wedding cake for a same-sex marriage ceremony. Based on their questions it appears the justices are struggling with how their ruling will impact other conflicts between religious liberty and same-sex marriage, which will eventually trickle down to the church.

Attorneys for Jack Phillips, owner of Masterpiece Cake Shop, argued that their client had a free speech right to refuse the job despite a Colorado civil rights law that claims his actions are discriminatory.

Chief Justice John Roberts asked the attorney for the state of Colorado, if under his legal theory, a group of Catholic lawyers offering pro-bono legal services could be forced to take cases supporting same-sex couples. The lawyer representing Colorado replied that they could.

Several justices questioned why a baker’s work could be considered speech and how the court could set a legal rule that would allow some businesses involved in “expressive” work, but not others, to refuse to serve certain customers.

Justice Elena Kagan asked Kristen Waggoner, Phillips’ lawyer, “What about a jeweler, a hairstylist or a makeup artist. How do you the draw the line?”

“Because it’s not speech,” Waggoner said.

“Some people may say that about cakes, you know,” Kagan replied.

The implication for schools and universities would be affected too. When Justice Samuel Alito asked David Cole of the ACLU whether “Colorado can compel a religious college . . . whose creed opposes same-sex marriage to provide married student housing for a married same-sex couple or allow a same-sex wedding to be performed in the college chapel,”  Cole admitted that the state could force this on the college.

Justice Anthony Kennedy, considered by many to be the swing vote on the court, asked questions that could give hope to both sides.

He asked US Solicitor General Noel Francisco if the administration, which supports the baker’s free speech claim, would be comfortable if the court’s ruling started a national movement to deny services of all kinds to homosexuals.

But Kennedy was also upset by a statement from the Colorado Civil Rights Commission that was cited in the legal briefs. “Freedom of religion and religion has been used to justify all kinds of discrimination throughout history, whether it be slavery or the Holocaust,” said Commissioner Diann Rice. “To me it is one of the most despicable pieces of rhetoric that people can use, to use their religion to hurt others.”

Kennedy said the statement showed a “hostility to religion” adding, “Tolerance is essential in a free society.  It seems to me that the state in its position here has been neither tolerant nor respectful of Mr. Phillips’ religious beliefs.”

IS IT A SIN TO PROVIDE SERVICES TO GAY WEDDINGS?

Another group that could be forced to deal with the fallout of the court’s decision is pastors. How should they counsel members who ask for advice on performing duties that violate their beliefs?  At the heart of that question is another:  Is it a sin to provide services to same-sex weddings?

The question was asked of pastor John MacArthur during a Ligonier Ministries conference last June.

MacArthur said, “No, it’s not sinful for a cake maker to make a cake for a gay wedding anymore than it’s sinful for a guy who runs a restaurant to serve dinner to somebody who is gay, sits in a booth and eats the food, or goes to the market and buys a loaf of bread and you own the market. What the issue is, is not whether that’s sinful. It’s whether the federal government can demand that people do certain things, which goes against their Christian conscience.”

MacArthur argued that this is “more of a political governmental issue.”

MacArthur also suggested it could be dangerous to ask Christians to violate their conscience.

“You don’t want to train yourself to ignore your conscience. I think it’s a personal issue. The issue becomes when people are basically fined or imprisoned for doing things that are religious-conscience matters. And, that speaks to the issue of how much authority the government has to make you do that.”

The issue becomes even more complex for churches as culture shifts on the issue of same-sex marriage.

Just as Supreme Court justices and church leaders weigh the impact of the ruling in this landmark case, so should every Christian.  How should we respond in similar situations? Perhaps the best advice comes from the man at the center of the Masterpiece Cake case.

Back in 2012, shortly after Phillips refused to bake the same-sex wedding cake, he started to receive threatening and harassing phone calls. He says he saw the calls as an invitation to prayer:  “[The phone calls] give me an opportunity to pray for people I wouldn’t know.”