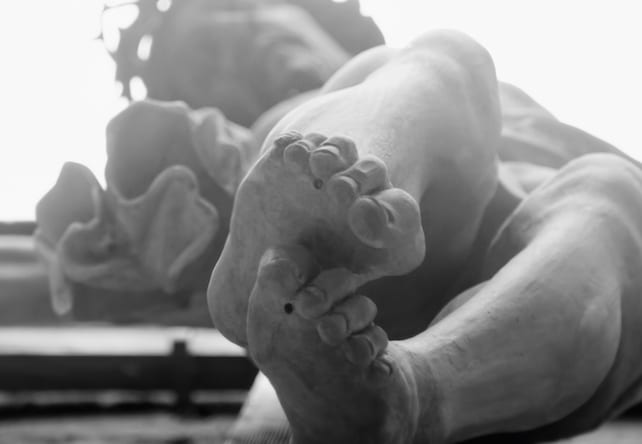 A rare find in Northern Italy– what researchers believe is the remains of a 30-something-year-old man whose death was similar to Jesus’ crucifixion 2000 years ago.

The only other time that the remains of a crucifixion victim have been found was in 1968, during an excavation of Roman-era tombs in Jerusalem. In those excavations, Greek archaeologist Vassilios Tzaferis found that a 7-inch-long nail had been driven through the heel bone of a man found in one of the tombs.

The same is true for this man, whose body was found by workers laying a pipeline in 2007, but it’s taken until now for a detailed study of the remains to be published.

The researchers found a coin-sized hole in one of the skeleton’s feet, which appears to have been caused by a nail. His wrists may also have been nailed, but the degraded condition of the remains made that unclear. Many crucifixion victims were tied up by the wrists, rather than nailed.

Just like Jesus’ crucifixion, archaeologists say the form of capital punishment was designed to be one of the worst ways to die ever devised by man. Victims would be laid out on the ground and lashed to a wooden cross with their arms stretched out and legs crossed over one another, bent at 45 degrees.

Seven inch nails would then be driven through wrists and feet before the cross was raised upright.

The victims would then be left to hang by their arms until they died.

Victims would usually try to support their weight on their legs but once they gave out the weight would be switched to the arms.

Slowly the shoulders would be dragged from their sockets with the elbows and wrists dislocating a few minutes later.

At this point, the arms would be six or seven inches longer than they had been at the start.

The victim would then have no choice but to carry his weight on his chest which would immediately hamper his breathing.

The weight would cause the rib cage to lift up and force him into an almost permanent state of inhalation.

He would then most likely either die of suffocation or from his heart giving out.

Sometimes the anguish could last for several days.

Despite tens of thousands losing their lives this way in ancient Rome, it’s only the second victim of the barbaric practice that’s been found.