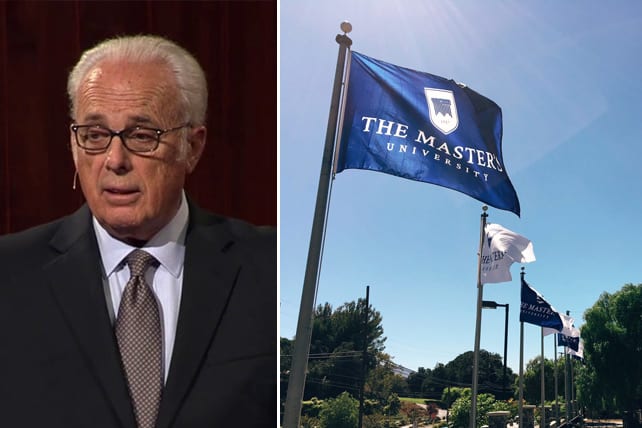 The Master’s University and Seminary (TMUS) in Santa Clarita, California, has been placed on probation by the Western Association of Schools and Colleges’ Senior College and University Commission (WSCUC)—one of the six regional accrediting agencies in the United States.

Among the issues cited in the report include a lack of board independence, allegations of conflicts of interest regarding student financial aid, institutional leaders being hired who lack qualifications for the higher education positions they hold, and what the WSCUC described as “a disturbing climate of fear, intimidation and bullying” at the university.

In a statement issued by the TMUS board of directors, the school stated that they are proactively working to “resolve every area of concern.”

The university is associated with Grace Community Church, which is pastored by the university’s president, John MacArthur. One of the concerns voiced by the commission was that MacArthur, among other board and cabinet members at TMUS, are “also on staff at GCC.”

The concerns were raised following a visit by members of the commission to the 110-acre campus in the Placerita Canyon in March. Under the terms of the probation, the school will continue to maintain its accreditation but will have less than two years to remedy the concerns.

“We are very committed to addressing and fixing every issue that WASC has highlighted,” said Dean of Faculty Kevin Hill. “There’s a lot of complicated issues, so we’re working diligently because it’s not something we can fix in a day.”

The Master’s University and Seminary Vows to Make Changes

“I think there are going to be adjustments made so that WASC is comfortable with where we are,” Hill told the Christian Post. “They are working through all those changes. The report was released before we had a chance to fully address all these issues. This stuff takes time because they are asking for a pretty substantive change and a lot of this stuff we have to research.”

Hill said the board was taking very seriously a complaint by members of the commission who reported seeing a “climate of fear, intimidation, bullying and uncertainty among significant numbers of faculty and staff.”

“This is something that I have personally never experienced,” Hill said. “So that was really surprising to me, personally. As dean of the faculty, I have never seen that. But I don’t want to discount the claims that other people made. That is something that the board and the president are taking extremely seriously. They took action as soon as we were given the preliminary report. They jumped on this because that is not who we perceive ourselves to be and obviously, something we need to address aggressively.”

Hill said the university’s board of trustees will issue its own report in the next few months, outlining what changes will be made to address the commission’s recommendations. The report will come before members of the commission revisit the school in November to address areas of non-compliance.

“The whole process is very healthy for institutions like us because it has been 10 years since an accrediting body came to the campus and they tell you where they see issues. They really do have your students’ interest at heart,” Hill said. “When you see things come back like WASC did with us, it is disappointing. But at the same time, it is an opportunity for improvement and we want to be the best possible institution for our students.”

Hill added, “We are taking everything they said very seriously.”