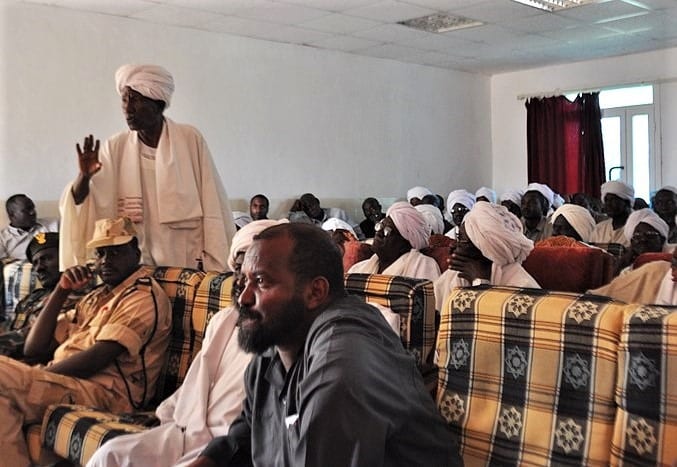 JUBA, South Sudan (Morning Star News) – It was more than a year ago that Muslims in the disputed area between Sudan and South Sudan noticed that Ahmed Alnour was no longer reciting his Islamic prayers five times a day.

The tribesman of the ethnic Misseriya Arabs was helping support his wife and seven children in Sudan working as a scrap trader at the Ameth common market in Abyei, a 4,072-square mile special administrative area on the border formed from the peace agreement that ended civil war in Sudan in 2005.

Alnour would soon have to leave that work, forced to flee when area Muslims confirmed that he had become a Christian.

“I saw them and heard them saying, ‘We will kill you because you left Islam and became infidel,’” he said of their attempt to burn down his home the afternoon of April 1, 2019.

Neighbors were able to douse the flames and he escaped unharmed, but on April 8 the assailants returned at 1 a.m. as he slept. He awoke to find his house in flames.

Alnour told Morning Star News that before Christians arrived to rescue him, he heard one of the assailants say in Arabic, “Let us throw him back in the fire, since he has abandoned Islam.”

The Christians took him to a hospital for treatment the following morning. He had lost all his possessions in the fire, including 600,000 South Sudanese pounds equivalent to US$6,000, but he had not lost his faith in Christ, he said.

The 43-year-old father of seven children ages 4 to 24 had put his faith in Christ just a few months prior. Paralyzed from an illness for three months in Agok, Abyei area, he received a visit from two evangelists who prayed for him and told him of salvation in Christ.

Alnour said he felt a conviction in his heart, and that after placing his trust in Christ he was healed.

“I was able to get up and walk after three months of sickness,” he said.

He was baptized at a church last Christmas. In hiding since the attacks last year, he has obtained a job and temporary quarters from church friends at an undisclosed village in the Abyei area.

Risks are growing as Muslims are looking for him, he said. Fear of Muslims’ reactions in Sudan and lack of economic opportunity keep him from going home to his family, but someday he hopes to be able to return and tell them about Christ, he said.

“I want to tell my family about my new faith in Jesus, and I am sure they will believe with me,” Alnour said.

In light of advances in religious freedom since Omar al-Bashir was ousted as president of Sudan in April 2019, the U.S. State Department announced on Dec. 20 that Sudan had been removed from the list of Countries of Particular Concern (CPC) that engage in or tolerate “systematic, ongoing and egregious violations of religious freedom” and was upgraded to a watch list.

Sudan had been designated a CPC by the U.S. State Department since 1999.

Following the secession of South Sudan in 2011, Bashir had vowed to adopt a stricter version of sharia (Islamic law) and recognize only Islamic culture and the Arabic language. Church leaders said Sudanese authorities demolished or confiscated churches and limited Christian literature on the pretext that most Christians have left the country following South Sudan’s secession.

In April 2013 the then-Sudanese Minister of Guidance and Endowments announced that no new licenses would be granted for building new churches in Sudan, citing a decrease in the South Sudanese population. Sudan since 2012 has expelled foreign Christians and bulldozed church buildings. Besides raiding Christian bookstores and arresting Christians, authorities threatened to kill South Sudanese Christians who did not leave or cooperate with them in their effort to find other Christians.

After Bashir was deposed, military leaders initially formed a military council to rule the country, but further demonstrations led them to accept a transitional government of civilians and military figures, with a predominantly civilian government to be democratically elected in three years. Christians were expected to have greater voice under the new administration.

The new government that was sworn in on Sept. 8, 2019 led by Prime Minister Abdalla Hamdok, an economist, is tasked with governing during a transition period of 39 months. It faces the challenges of rooting out longstanding corruption and an Islamist “deep state” rooted in Bashir’s 30 years of power.

Sudan ranked 7th on Christian support organization Open Doors’ 2020 World Watch List of the countries where it is most difficult to be a Christian.

If you would like to help persecuted Christians, visit here for a list of organizations that can orient you on how to get involved.