COLUMBUS, Ohio (RNS) — When the Rev. Megan Rohrer was elected bishop of the Evangelical Lutheran Church in America’s Sierra Pacific Synod in May 2021, the election was celebrated as a revolution in and outside of the United States’ largest Lutheran denomination. Rohrer became the first transgender bishop of any of the Christian churches known as the Protestant mainline.

Barely a year later, the top bishop of the ELCA asked for Rohrer’s resignation after Rohrer’s removal of the pastor of a Latino congregation on the Feast of Our Lady of Guadalupe.

What happened in the intervening 12 months can only be understood as a “perfect storm” of charismatic personalities clashing amid a heightened awareness of racism in one of the country’s whitest denominations, said Shruti Kulkarni, who maintains a website called “What Happened in the Sierra Pacific Synod?”

“Regardless of the intents of the people involved or whether it was justified or not, just the optics alone are terrible: You’ve got this white bishop from a predominantly white denomination that ruined this Latiné celebration of faith that was deeply cherished in their cultural tradition,” said Kulkarni, a recent graduate of Wartburg Theological Seminary.

On Tuesday afternoon (Aug. 9), leaders of the denomination delivered an apology to Iglesia Luterana Santa María Peregrina, formerly Misión Latina Luterana, and expressed a commitment to anti-racism at the ELCA Churchwide Assembly, the triennial meeting of the 3.3 million-person denomination taking place this week in Columbus, Ohio.

“This is in response to recent events in this church that have caused harm to people, communities and the whole body of Christ,” said a church press release. 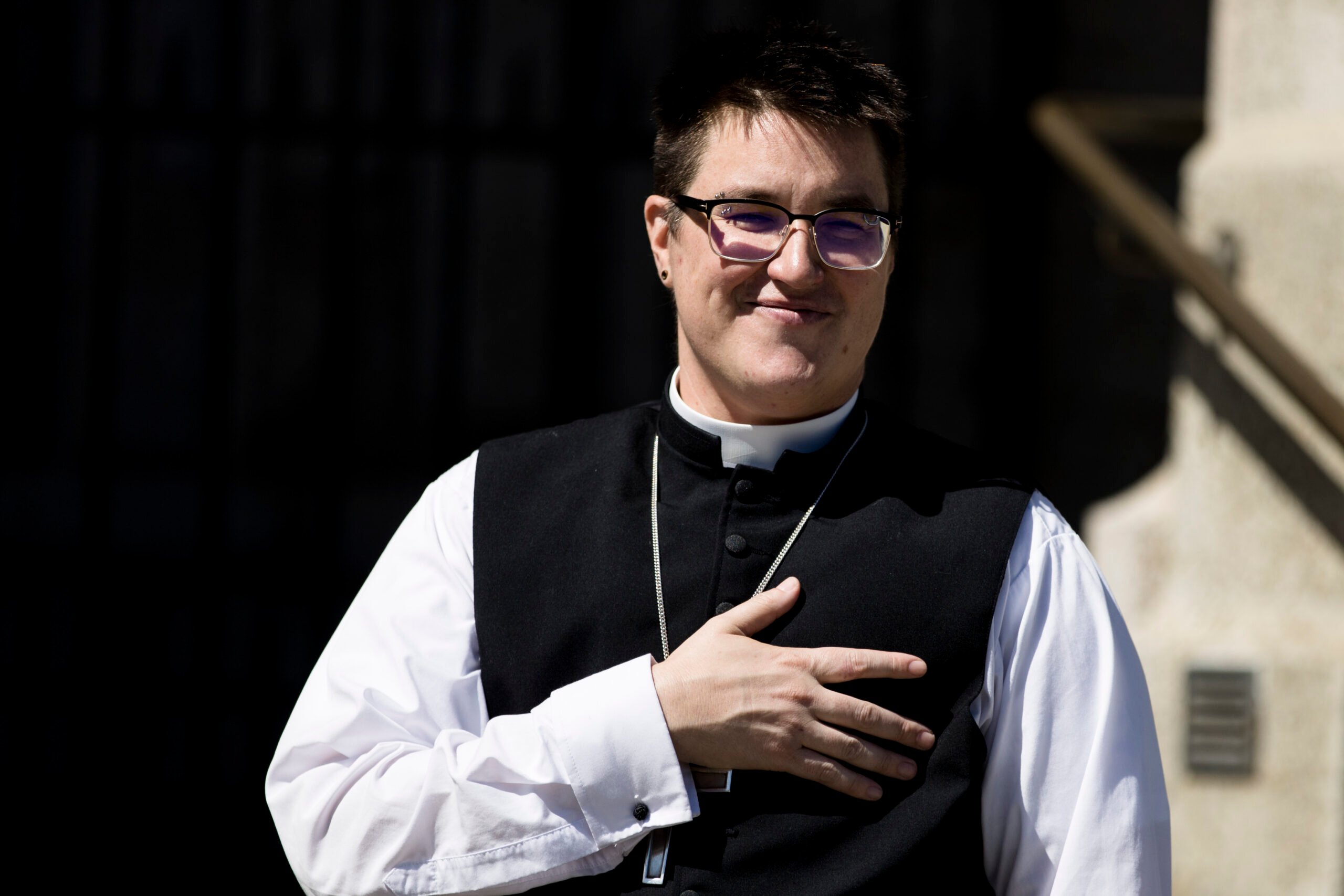 Bishop Megan Rohrer speaks to the press before their installation ceremony at Grace Cathedral in San Francisco on Sept. 11, 2021. Rohrer is the first openly transgender person elected as bishop in the Evangelical Lutheran Church of America. (AP Photo/John Hefti)

The celebration that followed Rohrer’s election last year wasn’t just about Rohrer’s identity — Rohrer, who uses the pronoun “they,” is also neurodivergent — ELCA Presiding Bishop Elizabeth Eaton said at the time. It was about all the gifts they bought to the church, including their focus on those who have been marginalized.

“What this means for the whole denomination, I believe, is that when we say, ‘All are welcome, and there’s a place for you here,’ we mean this,” Eaton said at the time.

Rohrer had only officially been in office three months when they appeared at another celebration on Dec. 12, the Feast of Our Lady of Guadalupe, a sacred and culturally significant day for many Latino Christians. Misión Latina Luterana, a Latino congregation in Stockton, California, had planned a service featuring Aztec dance and prayers and liturgical music by a mariachi band.

But, according to a listening team report on the day’s events, Misión Latina Luterana’s pastor, the Rev. Nelson Rabell-González, was not in attendance. The service was led instead by the Rev. Hazel Salazar-Davidson, the synod’s assistant to the bishop for authentic diversity, inclusive community and service. When the congregation began to shout questions about Rabell-González’s whereabouts, Rohrer, who was sitting in the pews, went to the front of the sanctuary and informed the congregation that they had removed Rabell-González from his position that morning.

In a statement on the Sierra Pacific Synod’s blog, the synod council said it had unanimously decided to vacate Rabell-González’s call at Misión Latina Luterana after receiving “continual communications of verbal harassment and retaliatory actions” by the pastor “from more than a dozen victims from 2019 to the present,” it said.

“The severity of the situation required immediate action to safeguard the Latinx community,” according to the statement.