Rohrer and Salazar-Davidson both spoke, as did a woman who identified herself as the pastor who spoke up a year earlier against Rabell-González. A measure to remove Rohrer as bishop was voted down.

Days later, Rohrer resigned, and Eaton announced she would be initiating the denomination’s discipline process against the former bishop.

In the months since, Bishop Claire Burkat has stepped in as interim bishop of the Sierra Pacific Synod.

On July 17 — her first Sunday in the synod — Burkat visited Iglesia Luterana Santa María Peregrina, formerly Misión Latina Luterana, which had lost its funding and support from the denomination when it lost its pastor. The congregation continues to meet with a new name and a new location, led by Rabell-González.

The interim bishop said in a letter to the synod that she promised the congregation an investigation into the circumstances of Rabell-González’s removal and an opportunity for the pastor to publicly address the complaints against him.

She apologized to Iglesia Luterana Santa María Peregrina for the lack of pastoral care and visitation following such a traumatic day, calling the apology the first of many owed to the congregation.

Burkat said in a written statement to RNS that her visit was intended as “just the first step in bringing this worshiping community back into communion with the Sierra Pacific Synod and the Evangelical Lutheran Church in America.” She promised to talk to the synod and denomination about renewing funding for the mission. 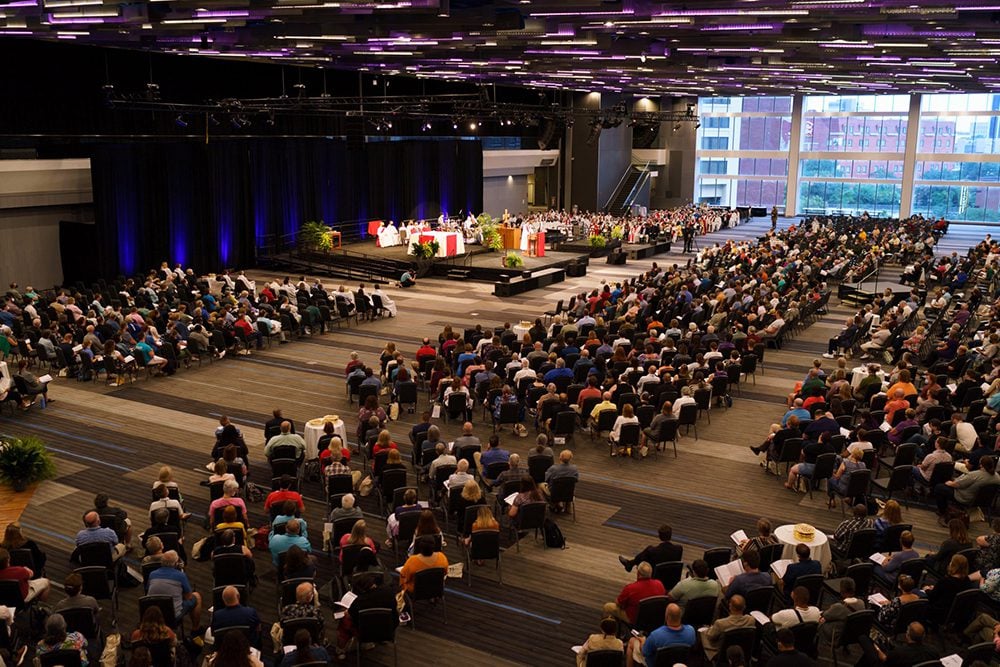 The congregation, Rabell-González and representatives of the ELCA’s Latino community all had requested a public apology at churchwide assembly, according to a report by Asociación de Ministerios Latinos de la ELCA, calling it the “first step in a potential process of healing and reconciliation.”

Rabell-González and Salazar-Davidson were not there when the apology was delivered at at the denominational meeting.

Salazar-Davidson has said she was diagnosed with post-traumatic stress disorder and filed for workers’ compensation. She’s wrestled with “what ifs” since the day Rabell-González was removed from his congregation, she told RNS. She’s wondered if there is more she could have done to prevent it.

“But the truth is that the institution has not been created for people like us,” she said.

Iglesia Luterana Santa María Peregrina deserves an apology, Salazar-Davidson said, but she added that an apology is meaningless without action, determined in partnership with the marginalized groups affected.

“The church has apologized in the past,” Salazar-Davidson said. “It has made statements responding to Indigenous racism, homophobia and transphobia, ableism, and others. But what good are the statements if no quality action follows? What good are they if there is no relationship?”

Rohrer wasn’t at the assembly for the apology either. They’re in Israel, where, they told RNS, they are learning about peacemaking efforts, supporting Israeli LGBTQ individuals and those in the occupied territories and discerning God’s call for the next chapter of their life.

“I support all efforts to provide care, healing and reconciliation for all affected from 2019 to the present,” Rohrer said.

Several measures addressing the ELCA’s policies and procedures have been proposed for this week’s sessions at churchwide assembly, including a measure to create a commission to study restructuring the denomination that was approved before Tuesday’s apology.

People are paying attention, according to Kulkarni. Tens of thousands of people have visited her website to find out what’s happening.

“The fact that the conversation is even happening is a very good sign it could lead to change,” she said.