Substantial majorities of evangelicals in the United States say they want an immigration solution that both secures the border and values those already in the country.

In a study sponsored by the Evangelical Immigration Table and World Relief, Lifeway Research surveyed both self-identified evangelicals and those who qualify as evangelicals by belief to determine their attitudes toward immigrants and refugees as well as their opinions on potential legislative actions addressing the issues surrounding immigration.

“Evangelical Christians should be looking to the Bible—not any political party’s platform, media personalities or even a survey of fellow evangelicals—to determine how they respond to the arrival of immigrants to their communities,” said Matthew Soerens, national coordinator of the Evangelical Immigration Table. “But as evangelical leaders seek both to disciple those under their care and to advocate for public policies consistent with biblical principles, this study allows leaders to verify the extent their positions are in line with the views of evangelicals ‘in the pews’ and to know how to better serve them.” 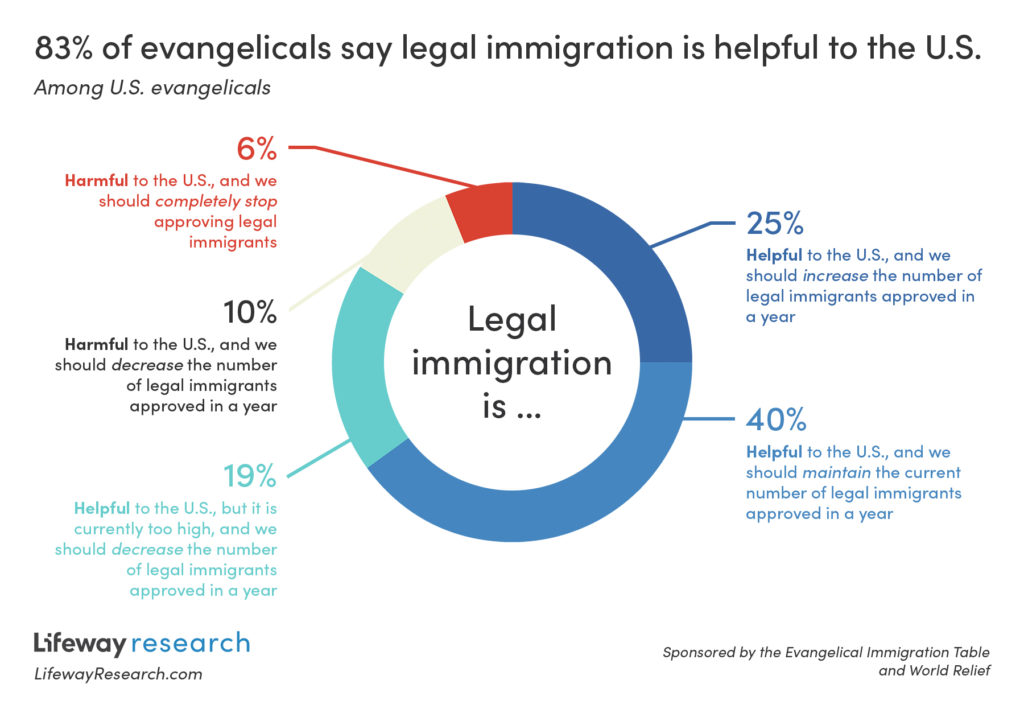 Evangelicals are most likely to see the number of recent immigrants to the U.S. as an opportunity, but significant numbers also view them as a threat. More than 2 in 5 say the arrival of immigrants is an opportunity to show them love (46%) and an opportunity to introduce them to Jesus (41%). A third (33%) say they are an improvement to America’s cultural diversity, and 19% say they provide a boost to entrepreneurial activity.

On the negative side, 33% of evangelicals say the recent number of immigrants is a threat to the safety of citizens, 32% say they’re a drain on economic resources, 31% see immigrants as a threat to law and order, and 26% view them as a threat to traditional American customs and culture.

“While fear of the volume of immigrants is not absent among evangelicals, the larger response is one of love for these individuals,” said Scott McConnell, executive director of Lifeway Research. “More than four times as many evangelicals find legal immigration helpful to the United States than those who find it harmful.”