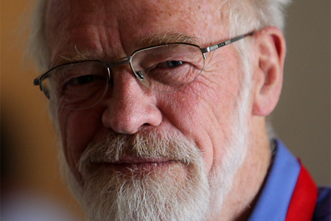 It was a pleasure to speak with the sagely Eugene Peterson at a consultation on Faith and Technology this past weekend. Peterson is best known for his ordinary-language translation of the Bible, called The Message, which has sold millions of copies, but he is also renowned for his many works on discipleship and spiritual theology.  He is the Professor Emeritus of Spiritual Theology at Regent College.

I spoke with Mr. Peterson about his memoir, The Pastor, and I look forward to publishing those comments.  But I also asked him — for our book feature on Love Wins — about the “Hellgate” controversy.  Peterson wrote a blurb for the back of the book that says, “It isn’t easy to develop a biblical imagination that takes in the comprehensive and eternal work of Christ…Rob Bell goes a long way in helping us acquire just such an imagination — without a trace of the soft sentimentality and without compromising an inch of evangelical conviction.”

What are your thoughts regarding Rob Bell’s book and the controversy it ignited?  What inspired you to endorse the book?

Rob Bell and anyone else who is baptized is my brother or my sister.  We have different ways of looking at things, but we are all a part of the kingdom of God.  And I don’t think that brothers and sisters in the kingdom of God should fight.  I think that’s bad family manners.

I don’t agree with everything Rob Bell says.  But I think they’re worth saying.  I think he puts a voice into the whole evangelical world which, if people will listen to it, will put you on your guard against judging people too quickly, making rapid dogmatic judgments on people.  I don’t like it when people use hell and the wrath of God as weaponry against one another.

I knew that people would jump on me for writing the endorsement.  I wrote the endorsement because I would like people to listen to him.  He may not be right.  But he’s doing something worth doing.  There’s so much polarization in the evangelical church that it’s a true scandal.  We’ve got to learn how to talk to each other and listen to each other in a civil way.

Do evangelicals need to reexamine our doctrines of hell and damnation?

Yes, I guess I do think they ought to reexamine.  They ought to be a good bit more biblical, not taking things out of context.

But the people who are against Rob Bell are not going to reexamine anything.  They have a litmus test for who is a Christian and who is not.  But that’s not what it means to live in community.

Luther said that we should read the entire Bible in terms of what drives toward Christ.  Everything has to be interpreted through Christ.  Well, if you do that, you’re going to end up with this religion of grace and forgiveness.  The only people Jesus threatens are the Pharisees.  But everybody else gets pretty generous treatment.  There’s very little Christ, very little Jesus, in these people who are fighting Rob Bell.