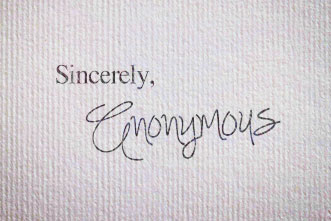 Have you ever received one of those anonymous letters that come with no return address? You know the ones we are told to not to read, to disregard and discard into File 13?

Well, my curiosity always gets the best of me and I can’t help myself.

You may be thinking, “Why are you spending your energy addressing Mr. or Ms. Anonymous in this post?”

First, I hope Mr. or Ms. Anonymous will read this post, and second, I hope they will set up an appointment with me so we can handle their concerns according to the Scriptures that they are so concerned about me violating.

I find it amusing that many times these letters come as corrective rebukes, warnings of false teaching, or criticisms of what is assumed to be a breach of biblical standards, when their very approach in writing an anonymous letter is in direct violation of Scripture.

The Apostle Paul wrote many letters of correction and rebuke to the leadership of the churches he pioneered, but here is the key. He signed them.

When a person neglects to sign a letter there is no authority behind it. Like a check without a signature, no relational transaction can be made if a person has failed to authorize it.

The Bible states that perfect love casts out all fear. An anonymous letter doesn’t have my highest good as its objective (Agape Love).

It’s destructive because there can be no response or resolution to it. Though it was not meant to attack or offend me, the enemy uses it to capture and occupy my thoughts that I cannot express. An anonymous letter is an imperfect and immature way to address a Pastor.

I have a suggestion. Let’s be biblical about straightening out matters of concern and misunderstanding with what I call the Matthew 18 principle (Matthew 18:15-18).

”If a fellow believer hurts you, go and tell him — work it out between the two of you. If he listens, you’ve made a friend. If he won’t listen, take one or two others along so that the presence of witnesses will keep things honest, and try again. If he still won’t listen, tell the church. If he won’t listen to the church, you’ll have to start over from scratch, confront him with the need for repentance, and offer again God’s forgiving love. Take this most seriously: A yes on earth is yes in heaven; a no on earth is no in heaven. What you say to one another is eternal. I mean this.”

Please hear me, Mr. or Ms. Anonymous. I am not offended in the least by your letter, but I’m hoping we can handle this as mature Christians should, according to the Scriptures.