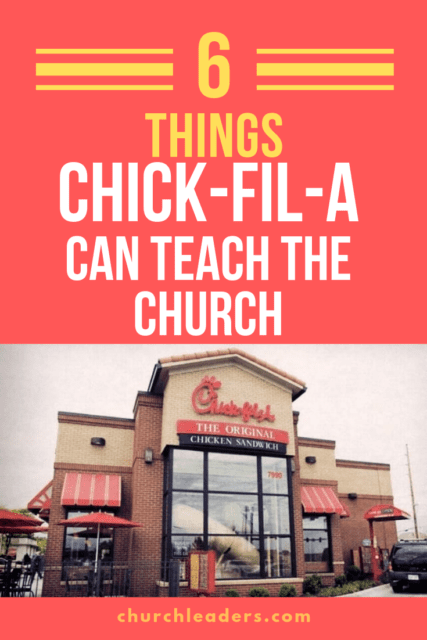 4. Learn from Chick-fil-A: Stick to your values. Change the rest.

Truett Cathy founded Chick-fil-A in 1946 on several values close to his heart.

Compare Chick-fil-A in 2014 to the founding Chick-fil-A, and the only similarities to be found are the starting values. Instead of mall locations, free standers dominate the market. The company’s menu has expanded tremendously. Even Chick-fil-A’s ‘Eat Mor Chikin’ cows only showed up a short nineteen years ago!

Chick-fil-A knows how to relate to the culture around them while sticking to their initial values.

As a church, we should recognize how to relate to our culture without changing what we believe in. It’s very possible to be relevant and original while keeping the message on Jesus and sticking to God’s Word. Change and timeliness are not the same as compromise, and we should stop viewing the two as such.

5. Learn from Chick-fil-A: Offer ‘Core Four’ service and nothing less.

Core Four service is the detailed attentiveness guests should receive when dining at a Chick-fil-A. This service is broken down into an obvious four-step check-off list.

Anything short of the Core Four is unacceptable. It’s a standard that’s expected to be met! Especially when it’s a standard leaders set by example.

Have we set standards in our church? And are our leaders meeting these standards? Start from scratch and set personal, ministry wide and church standards. Whether it’s in church attendance, prayer time, vision casting, etc., no one will meet their potential until an expectation is set. One can’t expect others to meet a standard that isn’t set out plainly and leaders aren’t following.

6. Learn from Chick-fil-A: It’s not a mistake—it’s an opportunity.

My first week at Chick-fil-A as a marketing director, my goal was to make a personal connection with one business or organization in town. Just like any new entrepreneur, I set out to shake hands and speak with anyone who was willing to let me give my spiel on Chick-fil-A catering. One woman I spoke with was excited to order with me! So I jotted her down for a delivery of Cinnamon Clusters and called it a day.

To my surprised and unknowing self, after cheering for my first order, my operator revealed to me—WE DIDN’T SELL CINNAMON CLUSTERS. The free stander down the road sold them, but us? No.

While I was down and out about my embarrassing move—considering I didn’t even take the time to look at the menu I was marketing—my operator encouraged me; it wasn’t anything to be upset about. It was an opportunity to learn.

While conviction is a part of the redemption process, condemnation is not. We should do a better job of helping people leave their embarrassment at the altar and turning their hard life lessons into opportunities. It’s not about keeping people in their shame; it’s about empowering them with the power of the Holy Spirit for a better tomorrow—a better opportunity.