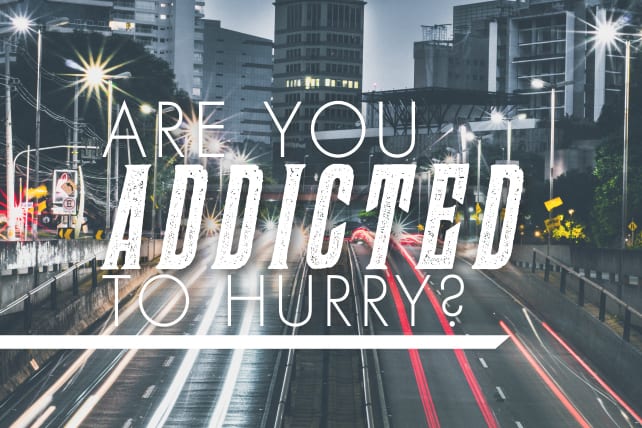 We live in a world that bombards us with incessant visual stimuli and noise. It’s easy to become addicted to that noise without realizing it. We often turn the radio on in the car when we drive. We leave the TV on, even though we aren’t watching it. And our cell phones are seldom silenced. Not only do we live in a noisy world, but we live in a busy one as well. Our time saving devices (cell phones, computers, faster Internet connections) relentlessly remind us that we should get more done in less time so that we have more time to get even more done. As a result we are addicted not only to noise, but to hurry. John Ortberg says that “hurry is not just a disordered schedule. Hurry is a disordered heart.”[1] So, what do we do?

Ortberg also writes about an article that appeared in a newspaper in Tacoma, Washington, a few years ago about Tattoo the basset hound.

Tattoo didn’t intend to go for an evening run, but when his owner shut his leash in the car door and took off for a drive with Tattoo still outside the vehicle, he had no choice.

Motorcycle officer Terry Filbert noticed a passing vehicle with something dragging behind it, “the basset hound picking them up and putting them down as fast as he could.” He chased the car to a stop, and Tattoo was rescued, but not before the dog had reached a speed of 20-25 miles per hour, rolling over several times.

He then observes that often we live like Tattoo, “our days marked by picking them up and putting them down as fast as we can.”

Hurry, noise and incessant busyness are enemies of a healthy spiritual life. I can attest to that in my life. It easily sneaks up on you. But God does not want us to conform to a superficial lifestyle marked by incessant noise and busyness. The Apostle Paul wrote these familiar words.

Rom. 12.2 (NIV) Do not conform any longer to the pattern of this world, but be transformed by the renewing of your mind. Then you will be able to test and approve what God’s will is—his good, pleasing and perfect will.

I believe the cure for this malady lies in two related spiritual disciplines: silence and solitude. In this blog I quote some famous people who wrote about these disciplines and list some key Bible verses on the subject. I hope this blog will stir your thoughts about building this practice into your life.

But first, some simple definitions.

Solitude: The practice of temporarily being absent from other people (in isolation or anonymity) and other things so that you can be present with God.

Silence: The practice of voluntarily and temporarily abstaining from speaking so that certain spiritual goals might be sought.

Powerful quotes on silence and solitude:

Henri Nowen: “Without (silence and solitude) it is virtually impossible to live a spiritual life.”[2] “It is a good discipline to wonder in each new situation if people wouldn’t be better served by our silence than by our words.” (The Way of the Heart)

Dallas Willard: “…this one (silence and solitude) is generally the most fundamental in the beginning of the spiritual life, and it must be returned to again and again as that life develops.”[3]

Pascal: “I have discovered that all the unhappiness of men arises from one single fact, that they are unable to stay quietly in their own room.”[4]

Austin Phelps (a pastor in the 1800s): “It has been said that no great work in literature or in science was ever wrought by a man who did not love solitude. We may lay it down as an elemental principle of religion, that no large growth in holiness was ever gained by one who did not take time to be often long alone with God.”[5]

Significant Scriptures on silence and solitude:

Eccl. 5: 2 Do not be quick with your mouth, do not be hasty in your heart to utter anything before God. God is in heaven and you are on earth, so let your words be few.

Mark 1:35 Very early in the morning, while it was still dark, Jesus got up, left the house and went off to a solitary place, where he prayed.

Luke 5:16 But Jesus often withdrew to lonely places and prayed.

Mark 6:31 Then, because so many people were coming and going that they did not even have a chance to eat, he said to them, “Come with me by yourselves to a quiet place and get some rest.”

How has silence and solitude helped you become a better leader?