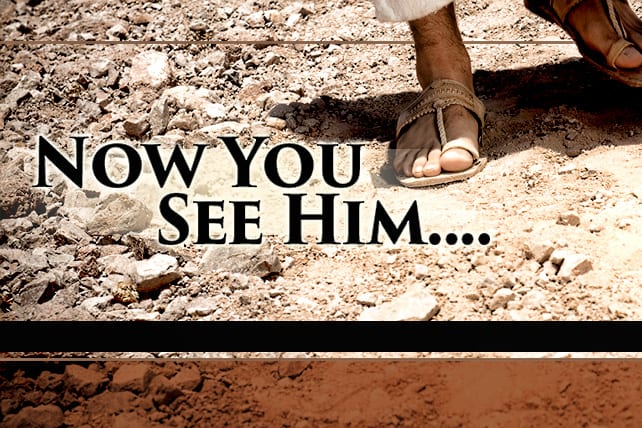 Have you ever wondered what Jesus was doing between the first Easter Sunday and his ascension six weeks later? The New Testament records 10 appearances, half of them occurring on the same day, and all together occupying only a few hours of his time. What else was taking place? Free of his former body’s constraints, was Jesus paying unrecorded visits to other cultures on earth, or zipping in and out of time warps and wormholes to check on other universes?

We rightly celebrate Easter as the day that changed history, the essential foundation of faith for two billion Christians. In the apostle Paul’s words, “And if Christ has not been raised, our preaching is useless and so is your faith.” As I read through the accounts this year, however, I was struck by their understated nature, so different from the birth stories of a bright star, angelic choruses and foreign dignitaries bearing gifts. The resurrected Jesus showed up in the most ordinary circumstances: a private dinner, two men walking along a road, a woman weeping in a garden, some fishermen working a lake.

A Superhero would have dazzled the crowds with a showy miracle, or swaggered onto Pilate’s porch on Monday morning to announce, “I’m back!” Jesus’ appearances show a different pattern: He mostly visited small clusters of people in a remote area or closed room. Although these rendezvous bolstered the faith of those who already followed him, there are no reports of Jesus appearing to unbelievers.

The appearances have a whimsical, even playful quality. Jesus seems to enjoy going incognito, and passing through locked doors as a surprise guest. He toys with the downcast Emmaus disciples, first feigning ignorance about the events in Jerusalem and then enlightening them. He changes plans in order to spend the night, although as soon as they recognize him, he vanishes. Now you see Jesus, now you don’t.

The last chapter of John’s Gospel records the most detailed account of a resurrection appearance. The 11 remaining disciples have already encountered Jesus, already absorbed the inconceivable fact that he has returned from the grave. Even so, seven of them have left Jerusalem and made the 75-mile journey to Galilee, apparently to resume their careers as fishermen. At first they fail to recognize the stranger on the shore calling out to them. Who does he think he is, giving fishing advice to the pros? They follow the prompting anyway, and Jesus performs his only post-resurrection miracle.

For fishermen, a net bulging with fish likely impresses them more than a paralytic standing up or a demoniac shaping up. Impetuous Peter jumps into the water to get a head start on the overloaded boat headed to shore. When the rest arrive, the seven haul in their catch and gather around Jesus. He has cooked breakfast, and they sit around the glowing coals like a family, as they did in the good days before Jesus’ death.

There follows one of the most poignant conversations in the Gospels, as Jesus exposes and reinstates Peter, his most loyal, blustery—and, in the end, traitorous—disciple. “Do you love me?” he asks three times, one for each occasion that Peter denied him. The repeated question stings Peter, embarrassed before his friends. Once the boil is lanced, Jesus turns to the redemptive future. “Take care of my sheep,” he says. And, “Follow me”—a command that could only be fulfilled in Jesus’ absence, for Peter will only see him once or twice more.

The very ordinariness of the resurrection appearances makes them all the more believable. In one sense Easter changed everything; in another sense life went on as before, even for the first witnesses. In Jesus’ resurrection they had a glimpse of the new reality, an advance clue to God’s restoration plans for a broken world. In the meantime they felt abandoned and confused, their leader more absent than present.

I like these scenes because they reflect not only the disciples’ reality in the first century but also ours in the 21st. John Goldingay at Fuller Seminary puts it this way: “Things stay the same, then Jesus appears and intervenes and things change, then things go back to being the same, then Jesus intervenes again.… Life involves an unremitting sequence of sadnesses and losses, but they are interwoven with appearances of Jesus, who shows up to make a difference.”

Yes, Easter changed history, though not in the way we might long for. This morning’s news is reporting yet another terrorist attack. Yesterday I learned that a friend died of a tumor that had grown inside his skull for 20 years. I prayed through a list of three other friends who have brain tumors, and a long list of those battling cancer; today I will pray for friends whose marriages hang by a thread, and tomorrow for parents who feel helpless as they watch their kids self-destruct.

Much as the disciples experienced with Jesus, sometimes we sense God’s close presence, and sometimes not. Occasionally we, too, feel like giving up and resuming our old, familiar lives. Perhaps Jesus rationed out his appearances to help prepare his followers for what awaits them. As the disciples sit bewildered around the breakfast fire, Jesus reminds them that the kingdom he has set in motion cannot be stopped—neither by his death nor by their own. The gates of hell will not prevail against the church he is leaving behind.

Much has not changed on that first Easter: Rome still occupies Palestine, religious authorities still have a bounty on the disciples’ heads, death and evil still reign outside. Gradually, however, the shock of recognition gives way to a long slow undertow of hope. The disciples’ transformation occurs at Pentecost, a few weeks later. At that event the “Spirit of Christ” descends on them and a new awareness dawns. Jesus has not left them after all. He’s loose, he’s out there, he lives on in them and in all who comprise “the Body of Christ.” Including you and me.

Easter puts Jesus’ life in a whole new light. Apart from Easter I would think it a tragedy that Jesus died young after a few brief years of ministry. What a waste for him to leave so soon, having affected so few in such a small corner of the world! Yet, viewing that same life through the lens of Easter, I see that was Jesus’ plan all along. He stayed just long enough to gather around him followers who could carry the message to others. Killing Jesus, says Walter Wink, was like trying to destroy a dandelion seed-head by blowing on it.

Jesus left few traces of himself on Earth. He did not marry, settle down and begin a dynasty. He wrote no books or even pamphlets, left no home or possessions to enshrine in a museum. We would, in fact, know nothing about him except for the traces he left in human beings. That was his design.

The poet Gerard Manley Hopkins got it right:

Christ plays in ten thousand places,
Lovely in limbs, and lovely in eyes not his
To the Father through the features of men’s faces.