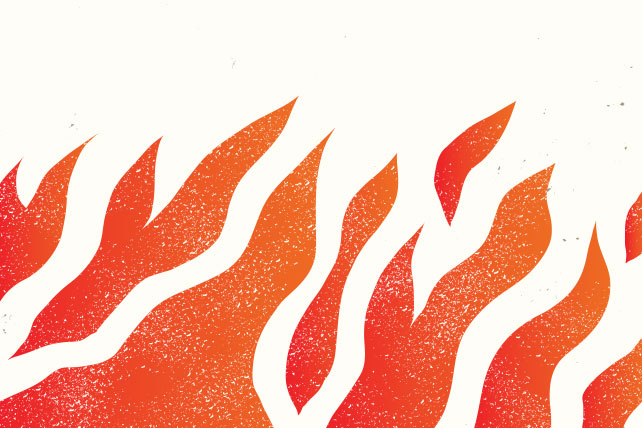 This article is part of the 5 Myths series. Author Mark Jones debunks these myths using Bible verses about hell.

Christ spoke a great deal more about judgment and hell than many might care to admit. Not only that, but he speaks of hell in a number of different ways to illustrate its endless, horrifying torment. For example, he uses a “parable” in Luke 16 to describe the place called “Hades” (Luke 16:23), which has a “great chasm” (Luke 16:26) fixed by God to prevent crossing from hell to heaven and vice versa. He speaks of the “hell of fire” (Matt. 5:22); the danger of the “whole body” being “thrown into hell” (Matt. 5:29); it is the “unquenchable fire” (Mark 9:43); the impenitent are “thrown” there (Mark 9:45), “where their worm does not die and the fire is not quenched” (Mark 9:48).

This culminates in the final chapter where he speaks of the Lord coming in fire “to render his anger in fury, and his rebuke with flames of fire. For by fire will the LORD enter into judgment, and by his sword, with all flesh; and those slain by the LORD shall be many” (Isa. 66:15-16). Finally, at the very end, the righteous “shall go out and look on the dead bodies of the men who have rebelled against [God]. For their worm shall not die, their fire shall not be quenched, and they shall be an abhorrence to all flesh” (Isa. 66:24; see Christ’s use of these words in Mark 9:48). This language is mirrored in Daniel, too, where we are told of the final judgment that “many of those who sleep in the dust of the earth shall awake, some to everlasting life, and some to shame and everlasting contempt” (Dan. 12:2).

Myth #3: Hell is not an endless place of punishment.

The New Testament is clear that hell is a place of “everlasting punishment” (Matt. 25:46); it is an “everlasting fire” (Matt. 18:8) that can never be quenched (Mark 9:45), where their worm never dies (Mark 9:48). Sodom and Gomorrah were punished for their sins by “undergoing a punishment of eternal fire” (Jude 7). False teachers have a place reserved in hell where the “gloom of utter darkness has been reserved forever” (Jude 13). In Revelation 14:11 the suffering of the wicked is described: “And the smoke of their torment goes up forever and ever, and they have no rest, day or night. . . ” (see also Revelation 19:3, Revelation 20:10, “forever and ever”). As William Shedd says, “Had Christ intended to teach that future punishment is remedial and temporary, he would have compared it to a dying worm, and not to an undying worm; to a fire that is quenched, and not to an unquenchable fire.”

He adds that other words and metaphors could have been used to describe a long, but not endless, punishment. Indeed, if hell is not endless, the New Testament writers “were morally bound to have avoided conveying the impression they actually have conveyed by the kind of figures they have selected” (Shedd). In the New Testament, the same word used to describe “everlasting life” is also used to describe “everlasting punishment.” Thus in Revelation 22:14–15 we see that the existence of the righteous in heaven is coterminous with the existence of the wicked “outside” heaven (i.e., in hell).

Hell is a place of punishment by God; sinners who have committed treason against an infinite God will remain in the place of torment where they shall only be able to continually hate the God they hated in their previous life. The idea that hell is mere “separation from God” is misleading and wrongheaded, though it certainly includes the idea of separation from Christ (Matt. 25:41). Rather, it is the opposite: a God-hating sinner, who does not have a mediator, remains in the presence of a holy, righteous, and powerful God.

Hell is a place, not a metaphor to describe some inner thought processes. The rich man in hell calls it a “place of torment” (Luke 16:28). Judas went to “his own place” (Acts 1:25). Just as there is a “place” for the righteous after death, so there is a “place” for the wicked after death. Gehenna refers to the Valley of Hinnom, outside Jerusalem. This place has a horrible history, with Israelites and kings of Israel, at one time, burning their children as sacrifices to false gods (i.e., Molech; see 2 Chron. 33:6; Ahaz did much of the same—see 2 Chron. 28:3). Gehenna may not be a reference to a burning trash dump, but it is actually far worse: a place where the most horrible things take place, such as the willful sacrifice of children. Evil at its worst is associated with Gehenna. Hell is a place of pure evil, a place as scary as it is destitute of all hope.

Rather than being mere “separation from God,” hell is, as the Puritan Thomas Goodwin said, a place where “God himself, by his own hands, that is, the power of his wrath, is the immediate inflicter of that punishment of men’s souls in hell.” God’s power will be “exercised” as his wrath towards those who cast away from the presence of God’s blessedness. In other words, those in hell will receive the opposite of those in glory, but they will still be in God’s presence. For those in heaven, they have a Mediator; for those in hell, they have nothing between them and an avenging God.

Myth #5: Hell is simply giving people what they want.

This is only partly true and open to possible misunderstanding. In one sense, hell is an endless (suffering) existence whereby the wicked do not commune with God. In this sense, their life in hell mirrors their life on earth. They did not want Christ on earth and they will, therefore, be without him in hell. However, nobody desires to suffer at the hands of God, especially forever. Nobody wants their despair to increase as well. As the creature in hell realizes more and more that they are suffering forever, the despair of eternal judgment can only increase. Those in hell have no promises, and thus no hope, but only increasing despair.

According to Goodwin, the “wretched soul in hell . . . finds that it shall not outlive that misery, nor yet can it find one space or moment of time of freedom and intermission, having forever to do with him who is the living God.” The wicked will despair because there is no end to the wrath of the living God. Therefore, the concept of ever-increasing despair for all eternity, whereby the creature damned to hell can do nothing else but blaspheme a living, eternal God, gives us all the reason in the world to persuade sinners to put their faith in the one who experienced hellish despair on the cross.

True, many do not want to worship the God and Father of our Lord Jesus Christ, but we need to convince people that hell is not people ultimately getting “what they wanted” as if there were some victory for the wicked, or possibly in an attempt to “sanitize” the doctrine to somehow make it palatable to unbelievers. In one sense, the wicked are going to get the opposite of what they wished for (and often experienced) on earth. We all want happiness, and as such we should all come to the fountain of blessedness, the Lord Jesus Christ, so that he can give to us all that we really desire: joy unspeakable.

Content adapted from Living for God by Mark Jones. This article first appeared on Crossway.org; used with permission.