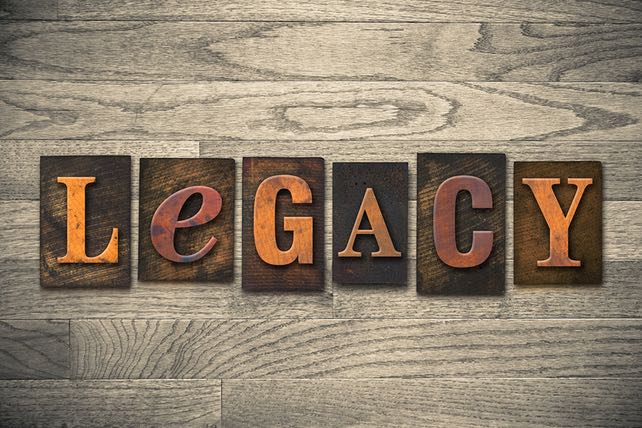 The dictionary defines the word legacy: “anything handed down from the past.”

I think if you ask most people if they want to leave a great legacy, they will probably say a resounding yes. When it’s all said and done, most everyone wants to be remembered in a great and positive light. We want people to say nice things about us at our funeral. After we die, and our name comes up in conversations, we want people to describe us in a beautiful and positive way. We want to leave a great LEGACY.

As I started to write this, I decided to google the word “legacy” to see what would come up. The first image that came up was a Subaru Legacy. I found this to be very symbolic, because when we look at our current society, it’s all about that kind of STUFF.

In a big-picture sense, the ultimate way to establish a living legacy is what Jesus did: DISCIPLESHIP.

In a leadership sense, MENTORSHIP is vital to establishing a living legacy.

When you look at the Old Testament, Asaph is an excellent example of someone who left a living legacy as a worship leader. He was a Levite and was appointed by David to be the chief musician and lead in giving God praise (I Chronicles 16:7). Later on, you see David using the “sons of Asaph”, which were either family members of Asaph or those mentored by him. Asaph’s descendants continued to be used by Solomon, King Jehoshaphat and King Josiah. Even hundreds of years later, after the people came out of Babylonian captivity, the “sons of Asaph” led worship when they started to rebuild the temple. It’s a legacy of worship leaders that just kept on living, because Asaph intentionally mentored and realized that what he was doing was bigger than himself.

For worship leaders, I think there are some practical steps we need to put into place in order to see this happen. I believe and have seen that when we focus on the concept of mentoring, we have the potential to leave a legacy that lives on and on.

DROP YOUR EGO—Being on a stage every week is an interesting responsibility. Everyone knows you, but you probably do not know everyone in your church, especially if it’s a large one. People admire you and look to you for leadership, and if you gain their respect, they follow you. It’s fantastic, but it’s also dangerous if your heart does not stay in check. If you’re not careful, the stage can feed your pride and ego instead of an opportunity for you to feed the flock. That is why it is so important to mentor and empower someone. It forces you to drop your ego and say “NO” to the lie that all of your value is found in what you do on the stage. Proverbs 16:18 says, “Pride goes before destruction, a haughty spirit before a fall.” When leaders fail to drop their own ego, their ego tends to drop them. Depending on how high your arrogance is, the ride down could be a pretty painful one. Mentorship is nearly impossible when the teacher is consumed by ego, because self-centeredness impedes the ability to care about anyone else’s success except their own.

SHARE THE SPOTLIGHT—Sharing the spotlight can be literal or figurative or both. Whether you have the position, attention or the actual lighting equipment, it’s important to the success of the one you are mentoring that you gradually and intentionally spotlight them. Obviously, you want to make sure to give them worship leading opportunities. Start by giving them songs in a set, and eventually they should be giving you days off. It’s also important to know and teach them that it’s not about their ego. When it comes to church and worship, it’s not about anyone’s glory except for God’s. Make Psalm 115:1 a theme verse: “Not to us, Lord, not to us but to Your name be the glory, because of Your love and Your faithfulness.” Recognizing the light of the world together is the most amazing way to share the spotlight.

CULTIVATE COLLABORATION—Mentoring reaches another level when you include the one you are investing in into the creative process. This can be one of the more challenging tasks in the mentoring process, because it requires two or more minds coming together. Everyone thinks differently, but when you successfully put those thoughts together you get a balanced attack toward your goal. One of my strengths is that I’m an achiever. This can work against me as a mentor, because I like to get things done. As a mentor, I have to be very intentional about cultivating collaboration. For instance, I sit down every week with another worship leader in our church and create the worship setlist. My pastor, who mentors me, is also intentional about collaboration. He sits down with me, every week, and asks for my input in his sermon. The result is a better sermon, setlist and an overall better worship experience in our service. Obviously, collaboration greatly benefits our church, but that’s not all. It greatly benefits the leader you are mentoring. It gives them buy in and models the idea that we can do things better together.

BECOME A PROMOTER—If you believe the one you are mentoring has the potential to be a better version of yourself, you have the power and responsibility to make that public knowledge. This is not about building up someone’s ego. It’s about promoting the next leader. In 2014, I had the privilege of hiring my brother to come on our team and be my worship arts assistant. He can pretty much do everything I can do, and he is nine years younger than me. I believe that he will surpass me in the music arts of our church, and I would be foolish to try and hold him back. To hold him back would be a disservice to him and our church. So, to be proactive about mentoring him, I immediately started promoting him and his abilities to my team and the people in our church. I would often tell people that he is a better musician and media artist than I am, and it’s the truth. I told people that he was “Durbin 2.0,” new and improved with all the upgrades. I believe that, and because of my position I have the unique opportunity to elevate and promote him to those I have garnered respect from. To not promote someone that has the potential to be a better version of you is an admission of your own personal fear and pride.

When we are not proactive about mentoring, we run the risk of being an enemy and roadblock to progress. Our fear of being upstaged blinds us from our power to replace ourself with the next great leader. That’s an incredible power and responsibility.

If we’re not careful, we will miss out on having a living legacy and will watch our legacy die with us.