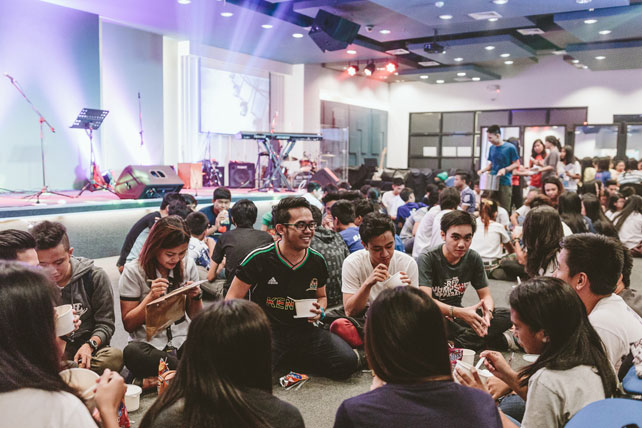 For a long time, youth lock-ins were key components of my ministry. I usually scheduled two a year—New Year’s Eve and sometime late in summer before school started. I even moved the date of my wedding from New Year’s Day to the Wednesday before because I didn’t want to have to celebrate my anniversary “hung over” from a youth lock-in.

I went ALL OUT every time to have a great youth lock-in experience. We’d get bands, order tons of pizza, go to different locations, rent big inflatable games…they were HUGE. Youth lock-ins were always my biggest-attended events. They were big in my youth ministry world. But no more.

I’ve been converted from the ranks of the “Lock-in-aholics.” I will never do a youth lock-in again. Here’s why:

1. They don’t grow the Kingdom.

Youth lock-ins are fun events. They drew a lot of students. But I never saw any long-term kingdom impact from them. Having done probably 20+ lock-ins over the year, I can’t say ANY students were changed by attending my lock-ins. And I didn’t just do the fun stuff. I had speakers, I had bands, I did devos, but saw nothing. And while some students started coming to youth group because of lock-ins, not many did. I wonder if I could have invested elsewhere and saw a better return.

2. They require a lot of work and money.

I’ve spent untold hours planning youth lock-ins. They also cost a lot of money to buy food, rent special equipment, hire a band, pay for a speaker, etc. If you do something, you want to do it well. We have limited time in ministry, though. I look back over the years, and wish I had a lot of these time sinks back where I could spend it on things that mattered. Yes, I got to build relationships with students, but there were much better avenues I could have gone about pursuing that wouldn’t have costed so much in time and money.

I have an idea. Lets get a bunch of hormonal teenagers, hype them up on Mountain Dew, get them running around for several hours, then see what happens when this toxic stew mess hits the exhaustion stage. Nothing good happens after 3 a.m. at a lock-in. I’ve caught students making out. I had a deacon’s daughter sneak out and smoke marijuana. I had a visiting student fake a seizure to get the attention of her boyfriend. I had an adult volunteer and students trash a bathroom that no one was supposed to use after getting into a shaving cream fight (and not tell me, so I could find out later when the cleaning lady had a fit). I had a visiting student come to me and tell me she “sees dead people” and saw demons in the church. NOTHING GOOD HAPPENS AFTER 3 A.M.!

You might be thinking I just bad with youth lock-ins, and maybe that’s it. But I’ve heard worse horror stories from my friends. Students having sex, students disappearing, volunteers getting into fights…bad things tend to happen at lock-ins. No matter how many adults you have, how well you’re organized or the precautions you take, you are increasing exponentially the chances of something bad happening when you have a large group of sleep-deprived teens locked into close quarters for long periods of time.

Seriously, staying up all night is bad for your health. Not just for us old guys, either (although as we age, staying up all night increases risks for stroke!). Many studies have been done on the effects of staying up all night, usually in the context of college students pulling all nighters. Staying up all night is dangerous. It literally changes the chemical makeup of your brain, at least temporarily. It causes changes in mood and behavior. Your body creates excess dopamine, which acts as a drug to energize you. While one night will not kill you, it does take several days to recover from the night. And repeated nights will start to effect long-term health.

On top of that, youth lock-ins are not known for their fine dining and healthy cuisine. Pizza. Chips. Cookies. Mountain Dew. We dump tons of junk food and sugar in students’ bodies. I watched a seventh grader down two whole two-liter bottles of Mountain Dew once. I cringe now thinking what was happening to his insides as that toxic sludge went to work.

5. They set up false expectations of ministry.

Apart from reason #1 (and I believe they are connected), this is the biggest reason I do not do youth lock-ins anymore. Lock-ins set up a fake picture of what youth ministry is supposed to be. People start to think:

I had a friend in ministry who did a lock-in every month. Literally every month. He was single and stupid. That’s the only explanation. And yes, he grew his youth group. He had lots of teens coming—to the fun stuff. His ministry did nothing significant, though. Students did not grow in Christ. They did not come to service projects. Eventually, he burned out and students were left worse off than before.

We’ve created a false picture of youth ministry. I did my first lock-in on the first day I started at my first church. We had 40 students. I was stoked! Then, at youth group four days later, we had three students. We never grew much above seven or eight. At the lock-ins, though, we could draw 40, 50 or 60. It never translated. Youth ministry is not all glitz and glamour. Yeah, we should have fun, but when having that big event becomes our focus, and we try to top it year after year, we’re creating a ministry idol that needs to be torn down.

I am aware that my age is showing. In my early 20s, lock-ins were so much fun. Now that I’m closer to 40 than 30, the thought of staying up all night with a bunch of teenagers sounds less appealing than the proctology exams I’m supposed to start getting in a few years.

Ironically, though, I am finishing this article at 2 a.m. Its not the lack of sleep that bothers me, but the long-term effects for the Kingdom that concerns me. I know that some day when I am standing at the pearly gates, Jesus will not ask me, “So, why did you not play Sardines in my name?” Instead, He will ask what fruit I bore. He will ask me how I spent my time ministering to students, and my answer cannot be, “But Lord, did I not plan lock-ins and order large amounts of pizza?”

How about you? How do you feel about youth lock-ins? Agree or disagree with me? I’d love to hear why in the comments!