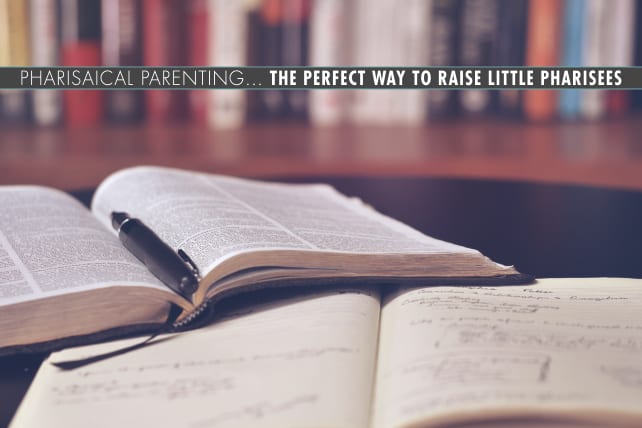 Then spake Jesus… Saying, “The scribes and Pharisees sit in Moses’ seat: All therefore whatsoever they bid you observe, that observe and do; but do not ye after their works: for they say, and do not.” Matthew 23:1-3

The Pharisees were known for their strict adherence to the law of Moses. They lived their pious lives in an effort to do everything by the letter of the law. In addition to the 613 ceremonial laws given in the Old Testament, they had added many of their own, and as a result, had become top-notch legalists in their view of life and spirituality.

The Pharisees believed that if you weren’t keeping every part of the law, you weren’t right with God. And in their minds, a person’s relationship with God was based primarily upon their rule-keeping ability.

Jesus warned His followers to obey their rules, but not to follow their works, because “they say, and do not.” They were good at telling everyone else to be right with God, when they were not right with God themselves. Primarily because the basis of their spirituality was terribly flawed.

Jesus brought greater clarity to what He was saying later in the chapter in verse 23 when He said, “Woe unto you, scribes and Pharisees, hypocrites! For ye pay tithe of mint and anise and cummin, and have omitted the weightier matters of the law, judgment, mercy and faith.”

HAVE WE MISSED THE POINT?

You see, the Pharisees missed the point. They were so busy keeping all of their rules, that they missed the more important things that really mattered. They missed the matters of the heart.

While the Pharisees were great at making sure all of the rules were followed, they were also some of the most critical, judgmental and legalistic people you’ll ever see mentioned in the Bible. Jesus referred to them as “whited sepulchers” in verse 27. They looked good on the outside, but were spiritually dead on the inside, because all they could see was the law, and they were self-blinded to the concept of grace that Jesus was trying to show them.

Sadly, it is very possible for us as parents to revert to such dangerous thinking ourselves, where we become “pharisaical,” or legalistic, in our own homes without even realizing it.

Pharisaical parenting happens when we start becoming more of a rule enforcer than a heart nurturer. We begin to focus more on outward conformity than we do on inward transformation. We begin to give more attention to what others see than what God thinks. We even often believe the lie that as long as we make sure our kids keep following all the rules, they will turn out right in the end…when sadly, nothing could be further from the truth.

We’re mistaken to think that more rules will automatically raise more godly kids. In fact, it can sometimes do the exact opposite, causing our children to be in danger of looking down at others, thinking they are somehow more spiritual because their list of followed rules is longer.

However, the best way to prevent legalism from creeping into our children’s hearts and lives is to first rid it from our own as parents.

SO DO THE RULES MATTER?

Jesus said about the Pharisees rules at the end of verse 27, “These ought ye to have done, and not to leave the other undone.” He was saying that while the rules are still important, they are no longer the main focus.

“The devil has driven the pendulum far beyond its proper point of rest; and when he has carried it to the utmost length that he can, and it begins by its own weight to swing back, he probably will set in, and drive it with the utmost fury the other way, and so give us no rest; and if possible prevent our settling in a proper medium.”

In other words, there must be a proper balance between God’s rules and God’s grace. An extreme in either direction has the potential to be terribly dangerous.

Jesus himself was the perfect example of such balance, as He was “full of grace and truth” (John 1:14). He said in John 14:15, “If ye love me, keep my commandments,” but He also said in Matthew 12:34 that “out of the abundance of the heart the mouth speaketh.”

So while the rules are important, matters of the heart always trump any checklist. Because…

Our kids need to understand that we follow God’s rules because we love Him, not in order for Him to love us. We live separated lives out of the overflow of God’s grace, not out of a fear of God’s displeasure. And our obedience stems from our relationship with God, not from our rule-keeping abilities.

What this means is that the rules are no longer our greatest motivation for serving God. Grace is. Under grace, we now put more of an emphasis on training and nurturing our children’s hearts for the Lord, than we do their passion and drive for adherence to the rules.

The Pharisees kept all the rules, but they missed grace, and as a result, they missed all that really mattered. They missed Jesus.

Jesus told the people that they would do well to keep the rules, but not at the expense of what mattered most—the matters of the heart.

Because if we do, we fall into the same trap and mentality that the Pharisees had…thinking we’re spiritual for all the wrong reasons, and inadvertently training our children to do the same. We become guilty of Pharisaical parenting.

May our children grow up knowing that we love God, more than we love rules. And when we love God first and foremost, following His rules will naturally follow from the heart.

Here are a few practical ways to do this in your home:

Remember, we’re not called to raise rule-followers, but Christ-followers. And once we make that distinction, in our own hearts and the hearts of our children, it can make all the difference in the world!

As a parent, what have you been giving more focus and attention to in your home? Following the rules, or following Jesus?