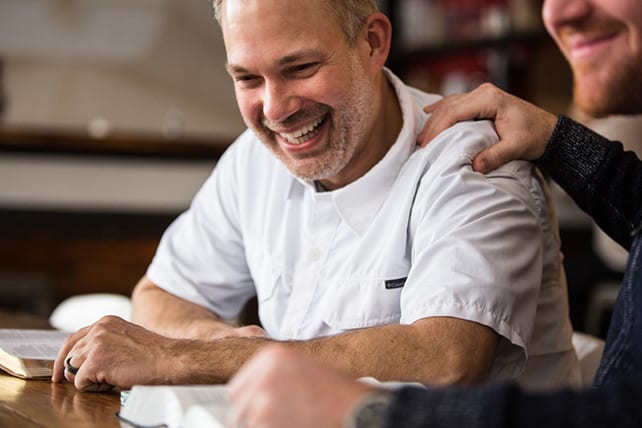 Rather than living authentically, Willy hides his true self behind a self-protective mask. To be sure, this career salesman is selling a product—but the product isn’t a vacation or a house or a set of knives, but a false image of himself. He is the quintessential poser, a shell of a man with no real friends, no real intimacy, no real joy, and no real purpose. He is a tragic prototype of what Henry David Thoreau alluded to when he said that “the mass of men lead lives of quiet desperation.” The worst part is that Willy’s hollow, poser way of life is the only legacy he knows of to pass down to his two sons.

Why Humility and Greatness Are the Same Thing

In the Bible, the scribes and Pharisees provide us with a tragic parallel. Like Willy, these religious professionals are obsessed with externally appearing holy, righteous, and pure while being none of these things internally. They say prayers, not to connect as a means of connecting with the Living God, but as a means to gain the approval of others. They fast regularly, not to sharpen their focus on God, but to be seen and praised by men. They order their external lives around the letter of the law, not to love God, but to gain leverage over God and moral superiority over others.

For the scribes and Pharisees, the most important thing in life was also to be well liked and well respected by others. Theirs is a tragic counterfeit of the good life, a form of stage acting through boisterous and public displays of piety. Their displays are undergirded not by the fruit of love, joy, peace, patience, kindness, goodness, faithfulness, gentleness, and self-control, but rather by a grouchy, judgmental, relationally bereft, radically insecure, spiritually juvenile, and emotionally stunted private reality. While giving an appearance of virtue on the outside, the religious poser in the scribes and Pharisees is broken, empty, and bereft on the inside. And, sometimes, so are we.

This longing we all have to receive affirmation from others is tricky, because its origin comes from a good place. While the longing for approval can manifest in dysfunctional ways like the scribe and the Pharisee, the original source of the longing is our identity as people made in the image of God, whose very essence and nature is to receive praise.

The image of God in us is the reason why we desire more healthy forms of affirmation and praise: a pat on the back for a job well done, an affectionate “I love you” from a spouse or loved one, or hearing the words, “I’m so proud of you!” from Mom or Dad.

Once when our youngest daughter was six years old, she asked me if I wanted to watch her read a book…silently. So there I sat for several minutes, quietly watching her as she thumbed through the pages without a sound. Then, I exclaimed how proud I was of her for being such an outstanding reader of books. Her longing for a paternal blessing—for a “Well done!” from her earthly father—was merely an echo of her deeper longing for the same from her Heavenly Father. This desire in a child is right, good, lovely, and never to be denied.

It’s true of all of us. Whether we are aware of it or not, each of us lives with a deep craving for positive, life-giving verdicts to overrule the negative verdicts pronounced over us from the outside and from within. When parents shame us, when peers exclude or tease us, when colleagues and bosses and spouses express disappointment in us, when our social media posts don’t receive the “likes” that we had hoped, when we are confronted with failure and with not measuring up—our impulse is to run for cover, to shield ourselves from condemnation and shame, to put up a defense, and to re-establish ourselves as worthy. We want to matter, to be significant, to be thought well of. And so, we live thirsty for benediction—for a good word spoken over us to reverse the negative verdicts from the outside.

Artists Who’ve Struggled With the Issue of Humility and Greatness

But those negative verdicts shout at us from the inside, also, don’t they? I once saw an interview with Mariah Carey in which the interviewer asked her why she, a very successful and celebrated musician, still struggled with feelings of emptiness and insecurity. Her answer was that she could hear a thousand praises and one criticism, and the criticism would overrule all of the praises.

In her honest answer, Mariah Carey put words to what all of us experience inside. When a text message comes in that reads, “We need to talk,” our impulse is to assume that criticism is on the way. Our hearts naturally assume that we have been found out, and that the sender of the text—based on whatever she or he now knows about us—may on that basis leave or forsake us. This can be true of bosses, colleagues, neighbors, friends, or even family members. We think to ourselves, “If they knew everything about me, or even if they knew just a little bit more about how I really am, surely they would lose respect for me.”

Perhaps this is why Psychiatrist, Karl Menninger, said that if he could convince his patients that their sins were forgiven, seventy-five percent of them would no longer require psychiatric care.

Similarly, the famous musician, James Taylor, once said in an interview with Rolling Stone Magazine that criticism of his music brings out a deep insecurity in him. Also regarding criticism, Taylor said, “I’ll be fine as long as every once in a while someone like Bob Dylan or Paul McCartney says to me, ‘Keep going, kid.’”

How to Live Authentically to Realize Humility and Greatness

When we lean on the praise of others—whether in a grumpy religious way or in an emotionally needy way—when we feel that we need applause from other people to prevent an emotional breakdown or a crisis of identity, we are trying to fill an infinite space with finite goods. The truth that musicians like Mariah Carey and James Taylor must face, and for that matter, what pastors and authors like myself must face, is that all human applause has a limited shelf life. Eventually, all memory of us and of any praiseworthy things we offered to the world will be completely forgotten.

Put another way, the praise of others—and Willy Loman’s desperate quest to be well liked and respected—while originating with the image of God, can also be distorted into an idol that can never satisfy our emptiness.

We would be better off pursuing what Henri Nouwen called “downward mobility.” Nouwen, who spent several years writing and speaking and being celebrated as a teacher at esteemed universities including Notre Dame, Yale, and Harvard, forsook his ascending celebrity at its peak. At the urging of his friend, Jean Vanier, Nouwen would instead spend the rest of his life pastoring a small community of mentally disabled men and women called L’Arche. Nouwen’s rationale for this radical, “downward” move was as follows:

“Scripture reveals…that real and total freedom is only found through downward mobility…The divine way is indeed the downward way…[Jesus] moved from power to powerlessness, from greatness to smallness, from success to failure, from strength to weakness, from glory to ignominy. The whole life of Jesus of Nazareth…resisted upward mobility.”[1]

For Henri Nouwen and for us all, greatness is not found in being well liked and respected by others, not in striving to reverse the negative verdicts, not in making a name for ourselves. Instead, greatness is found as we become more boastful about Jesus and more shy about ourselves…and in a life increasingly poured out for Jesus and others.

Being Self-Forgetful Is the Path to Humility and Greatness

How do people like Henri Nouwen become so free? How to they find strength to renounce emotional neediness and the craving to be well liked and respected by others, and to instead pour their lives out in love for others…even those who can give nothing in return? I dare say that this ability to become self-forgetful, this ability to divert their eyes away from toward God and neighbor, was fueled and sustained by the daily voice of their Heavenly Father and ours—whose love through Jesus is always unfailing, always secure, and always triumphant over negative verdicts—saying to them, “Keep going, kid.”

The way up is the way down. When we walk the path of downward mobility, we are lifted up by the “Well done” of our Father in heaven.

What could be better than this?

This article about humility and greatness originally appeared here.