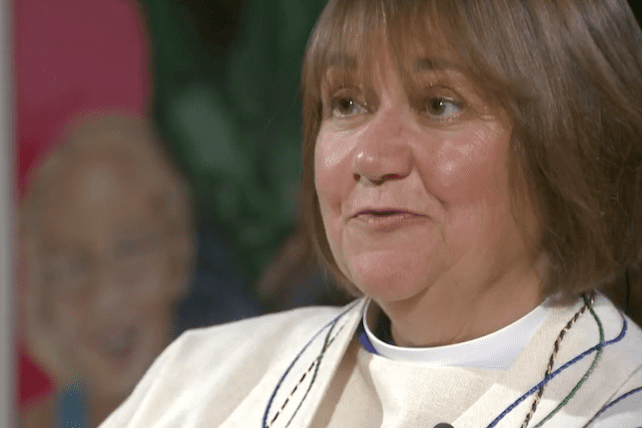 On July 16, 2016, the United Methodist Church (UMC) consecrated the Reverend Karen Oliveto to serve as bishop of the Mountain Sky Area. While Oliveto is not the first woman to achieve the title of bishop in the UMC, she is the first lesbian. Last week, the top court of the UMC ruled Oliveto’s consecration to bishop was in violation of the church law.

Following a vote of 6-3, the Judicial Council determined Oliveto’s consecration was unlawful, yet she remains in “good standing.” What this means is that Oliveto and her ministerial office will be subject to “review,” the guidelines for which the council laid out in what could be considered legalese.

According to UMC church law, as articulated in the Judicial Council’s decision, clergy are expected to adhere to “the highest ideals of Christian life.” These ideals must include a “commitment to abide by and uphold the church’s definition of marriage and stance on homosexuality. An openly homosexual and partnered bishop is in violation of those minimum standards.”

A member of the Western Jurisdiction counsel, Richard Marsh, tried to argue around the church law by saying that Oliveto’s marriage to another woman was not “a public statement about her sexual practices,” as summarized by an article on umc.org. A couple of voting members of the Council also filed a dissenting opinion stating the Council had no jurisdiction over the ruling. These arguments were both overturned in the decision.

Oliveto was elected by the Western Jurisdiction and consecrated to leadership over 400 churches throughout Colorado, Idaho, Montana, Utah and Wyoming. Following her election, the South Central Jurisdiction petitioned against her consecration, citing the church law as their reasoning.

Some (like the Western Jurisdiction that elected her and the church Oliveto lead in San Francisco before moving to Denver) are supportive of Oliveto. Speaking with UMC.org, Oliveto said she originally resisted the calling to bishop, knowing it would create a lot of waves because of her sexual orientation. “I did not want to harm the church. I am out (as a lesbian) and I have been out since 1992 in my ministry. I didn’t want to be harm to anyone or be harmed,” she says.

It appears the Judicial Council doesn’t know what to make of Oliveto—clearly a minister that resonates with her congregants and a candidate that has more church leadership experience than most.

Oliveto is simply a face and a name to attach to the UMC’s bigger problem of more progressive congregations trying to share the umbrella with more conservative ones. The drawn-out situation belies a threat of schism that has been rearing its ugly head within the UMC.