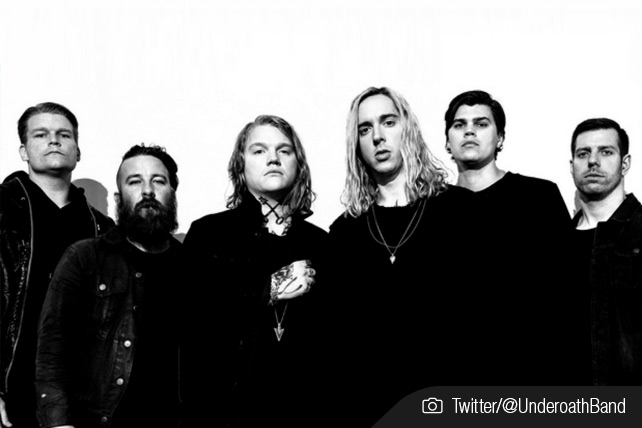 They are considered three of the most popular Christian metal groups. At least that’s what I’ve been told. The genre is also known as White metal; heavenly metal; Jesus metal.

Christian metal combines heavily distorted guitars and double-bass drums with screamed or growled lyrics. You might call it an acquired taste.

One of the bands in the genre is Underoath. At least it was. The band toured for a decade before disbanding in 2015. We’re now hearing that the artists were undergoing something of a faith crisis during their time on the road. When they recently resurfaced, Underoath announced that it no longer identifies as a Christian band, and singer Spencer Chamberlain no longer considers himself a Christian.

Chamberlain’s story sheds some light on world of Christian celebrity and the fine line between standing for truth and judging.

“It was so much pressure and everything you did—no pun intended—you were crucified for. You couldn’t do anything without someone being angry. People don’t realize how much that weighs on you.”

And Chamberlain gave his critics plenty to talk about.

“My drug problem was very public and all of the Christian community hated me. I was struggling and all I was getting was hate, like, all I’m having is people tell me how _______ I am all the time. That’s not love, that’s not comfortable. The most alone and isolated I’ve ever been in my life is when I considered myself a Christian, personally. Because I had real issues going on in my life and no one could talk to me about it. There was no help. There was nothing. It was just hide it, don’t talk about it because if you do you’re not Christian and the band can’t go on anymore and that’s such an unrealistic thing.”

Author and pastor Mike Leake wrote he was “heartbroken” when he heard Chamberlain’s story.

“The most anti-Christian statement is the one where Chamberlain says, “The most alone and isolated I’ve ever been in my life is when I considered myself a Christian, personally.” I don’t know Chamberlain’s story. Maybe he is just a bitter man raging against innocent people. But I’ve spent time in oppressive environments that called themselves Christian where I felt deeply alone. Brothers and sisters, this should never be. It’s horrible that a broken man who is claiming to be in Christ would need to feel isolated and alone because he was battling addiction.”

Leake accepts some will argue Chamberlain likely never had a relationship with Jesus. He even admits they might be right. He also raises the possibility that fame, celebrity and popularity propelled someone into the spotlight who wasn’t ready and it destroyed a faith that wasn’t actually biblical.

But he also notes that Christians can be brutal to one another, and to outsiders. And that is why Leake is heartbroken about a singer and a band that played music that “lends itself to melting my face.”

“It’s time to mourn. It’s time to weep for the fact that a young man facing drug addiction wasn’t met with the gospel but with shame. I’m not saying that he likely didn’t need to hear tough words of love. Who knows, he might have heard gospel but his heart was so turned off to God and focused on self that he took words of love as barbs of hate. That happens. But what if he really was met with the Pharisaical religion that so often masquerades around as Christianity? What if our moralism swallowed up another soul in the name of Jesus?”

And to Chamberlain, Leake writes: “Wrestle with the claims of Jesus. Do business there. Not with us, his followers. We blow it.”