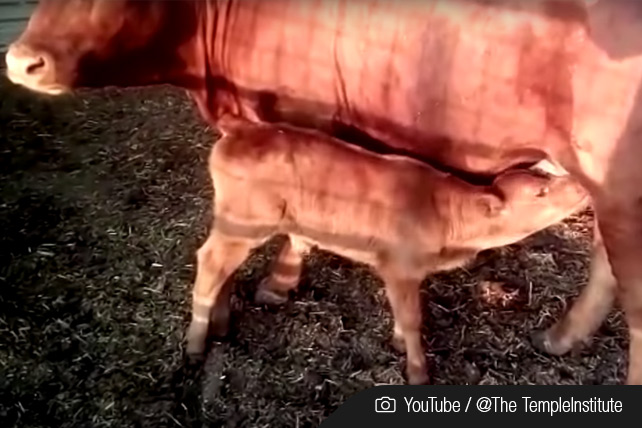 A red calf was born August 28, 2018, in Israel. The calf’s birth is causing quite the stir, both in the Jewish world and also among Christians. The reason? The calf’s presence could signify a new era for the world (or the end of it).

The Temple Institute made the announcement about the red heifer on their Facebook page. According to the group, the calf has already been examined thoroughly by rabbinical experts. The experts “determined that the heifer is currently a viable candidate for the Biblical red heifer (para aduma) described in Numbers, chapter 19, and will be examined again in three months time to determine whether it continues to possess the necessary qualifications for the red heifer, a necessary prerequisite for the renewal of the Divine service in the Holy Temple.” The calf was born thanks to the Institute’s “Raise a Red Heifer” program. On their website, the Temple Institute states their ultimate goal is is to see “Israel rebuild the Holy Temple on Mount Moriah in Jerusalem, in accord with the Biblical commandments.”

The Scripture that discusses the red heifer is found in Numbers 19:2:

This is a requirement of the law that the Lord has commanded: Tell the Israelites to bring you a red heifer without defect or blemish and that has never been under a yoke.

As Breaking Israel News explains, this red heifer could have profound spiritual significance for Jews:

The red heifer was the main component in the Biblically mandated process of ritual purification for impurity that results from proximity or contact with a dead body. Because the elements needed for this ceremony have been lacking since the destruction of the Second Temple, all Jews today are considered ritually impure, thereby preventing the return of the Temple service.

While there have been a couple red calves born in Israel since the start of the Temple Institute’s Raise a Red Heifer program, those calves ended up not meeting the very strict qualifications for a heifer “without defect or blemish.” Breaking Israel News describes what is required for a heifer to be considered qualified:

The heifer, born from a natural birth, must be entirely red, with no more than two non-red hairs on its body. It must also never have been used for any labor or have been impregnated. The existence of such a heifer is considered a biological anomaly and very rare. Fortunately, the ritual requires an infinitesimally small quantity of ashes. From the time of Moses, who personally prepared the first heifer, until the destruction of the Temple, only nine red heifers were prepared. Nonetheless, this was sufficient to maintain the ritual purity of the entire nation for almost 2,000 years.

The calf is being called a “candidate” at this point because it will need to continue to meet these qualifications while maturing into a heifer before it can be used for sacrifice.

Rabbi Chaim Richman, the National Director of the Temple Institute, wrote about the significance of this red heifer’s presence on the Institute’s website.

If there has been no red heifer for the past 2,000 years, perhaps it is because the time was not right; Israel was far from being ready. But now…what could it mean for the times we live in, to have the means for purification so close at hand? With the words of Maimonides in mind, we cannot help but wonder and pray: If there are now red heifers…is ours the era that will need them?