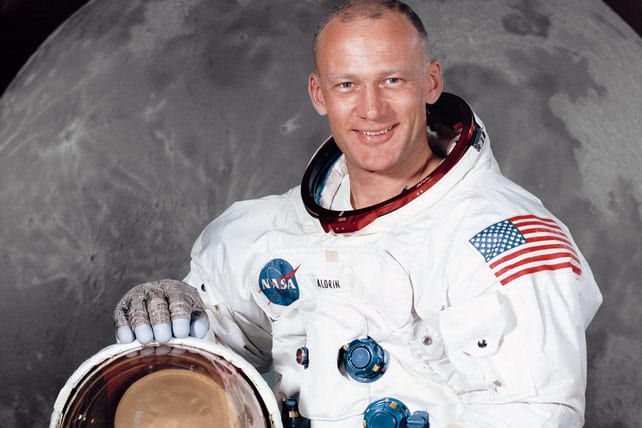 This Saturday mankind will celebrate the 50th anniversary of humans landing on the moon. On July 20, 1969, two American astronauts stepped on the moon—a first for the humble inhabitants of Earth. While the accomplishment spoke to the incredible potential of scientific thought and human ingenuity, the mission also included a sacred moment of acknowledging mankind’s dependence on God’s provision and mercy.

“The very first liquid ever poured on the moon, and the first food eaten there, were communion elements,” Astronaut Edwin “Buzz” Aldrin wrote in an article for Guideposts in 1970.

Preparing for Holy Communion on the Moon

Before he launched off with fellow astronauts Neil Armstrong and Michael Collins on the Apollo 11 mission, Aldrin thought about the significance of being one of the first people on the moon. Aldrin talked over “the right symbol” he could bring with him with the pastor of the church he attended near Houston, Texas. Just weeks before the scheduled launch, Aldrin had an idea: He could conduct a simple communion service in the lunar module.

Aldrin believed the gesture would symbolize “the thought that God was revealing Himself there too, as man reached out into the universe.”

Pastor Dean Woodruff was the leader of Webster Presbyterian Church, where Aldrin served as an elder in 1969. Woodruff was on board with Aldrin’s idea of “lunar communion”, although a question arose as to whether it was permissible for a layperson to administer Holy Communion by himself. Woodruff wrote to the Presbyterian church’s General Assembly to ask if this would be permissible; he got a swift reply that yes, given the unique circumstances, it would be just fine.

Before liftoff, Woodruff organized a service that would include communion at Webster Church just before Aldrin was scheduled to leave Houston to travel to the launch site at Kennedy Space Center in Florida. The whole church originally was to be involved in the service, but plans were changed to only include a small group of people after doctors instructed the astronauts to take extra measures to protect themselves from being exposed to any germs that could potentially derail the mission.

Aldrin and his wife, Joan, and their oldest child, Mike, joined Woodruff, his wife, and a close family friend Tom Manison and his wife for the private ceremony. Woodruff tore a small piece of the communion loaf and gave it to Aldrin for the even more private ceremony he was planning to hold on the moon. He also gave a small chalice belonging to the church that Aldrin could use to drink the wine.

Aldrin jotted down John 15:5 on a piece of paper and tucked it into the small pouch of personal effects he was allowed to bring into the Eagle lunar module. Along with the small silver chalice from Webster Church and the bread from the communion ceremony, the Scripture completed the things Aldrin brought in order to partake in Holy Communion.

Breaking Bread on the Moon

When Armstrong and Aldrin landed the Eagle lunar module on the moon (Collins stayed in the command module which would orbit the moon and eventually take all three astronauts back to earth), the two men spent some hours recovering from their space flight. The plan was to have a meal before they stepped on the surface of the moon. For Aldrin, it was time for Holy Communion.

“Houston, this is Eagle. This is the LM Pilot speaking. I would like to request a few moments of silence. I would like to invite each person listening in, wherever and whomever he may be, to contemplate for a moment the events of the past few hours and to give thanks in his own individual way,” Aldrin said to the army of engineers and scientists listening from Houston. He then took communion while Armstrong (a deist) respectfully observed but did not participate.

Aldrin wrote, “In the radio blackout I opened the little plastic packages which contained bread and wine. I poured the wine into the chalice our church had given me. In the one-sixth gravity of the moon the wine curled slowly and gracefully up the side of the cup.”

Back home in Houston, congregants of Webster Church were also observing Holy Communion in solidarity with their brother who was so far away from them. Aldrin said at that moment he “sensed especially strongly my unity with our church back home, and with the Church everywhere.”