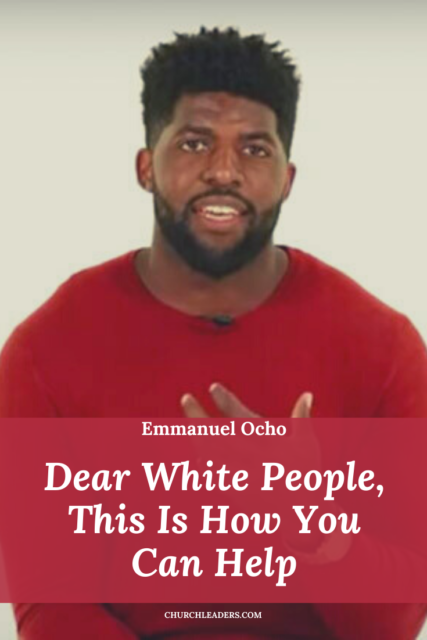 Former NFL player Emmanuel Acho has started a video series he is calling “Uncomfortable Conversations with a Black Man,” which he is posting across his social media channels. Acho filmed the first installment of the series as a response to his white friends, many of whom have asked him what they can do to help bring racial healing and unity in the U.S.

“I created this for you,” said Acho, “because in order for you to stand with us, with people that look like me, you have to be educated on issues that pertain to me and fully educated so that you can feel the full level of pain, so that you can have full understanding.”

Emmanuel Acho said he hopes what he has to say will help his “white brothers and sisters” to have increased compassion so they can bring about change to a problem caused by their own community. In his video, Acho responded to four questions that his white friends have been asking him.

The first is, “Why are people rioting instead of protesting peacefully?” To answer this, Acho quoted Dr. Martin Luther King, Jr, who said, “a riot is the language of the unheard.” Black people have tried peacefully protesting throughout the years, but have not been successful in achieving the change they were seeking, said Acho, citing the Selma marches in 1965 and Colin Kaepernick’s refusal to stand at the national anthem in 2016. People are rioting now because they are trying to draw attention to the oppression of black people.

“I don’t condone rioting,” said Acho, “and I’m sure you don’t either.” But anger is part of the five stages of grief, so it’s not surprising that we are witnessing people’s anger manifest in this way. He said, “Sometimes pain and hurt, it doesn’t know how to express itself.”

The second question the former NFL player addressed was, “Why do you think white privilege exists?” Acho used a metaphor of two people running a race to answer this question. White people are like a person who has been running since the very start of the race, and black people are like someone who has been held back 200 meters after the race begins. Just because both people are free to run at a certain point does not mean that the race is fair. It’s as though in the 1960’s we said, “Ok, black people, you can go now.”

This does not mean your life hasn’t been hard, he said. It means your skin color hasn’t made it harder. Acho described scenarios in his daily life, like going to the mailbox or getting on an elevator, where he does his best to avoid being alone with a white person in order to avoid the other person seeing him as a threat. “At any point in time,” he said, “whiteness can be weaponized.” A recent example of this was Amy Cooper, the woman in Central Park who called the police on a black man who asked her to put her dog on a leash. This incident, said Acho, hearkened back to the murder of Emmett Till, a 14-year-old boy who was lynched by two white men when a white woman falsely said that Till had flirted with her.

“I as a black man have to calculate every move I make from the second I walk outside my house,” said Acho. In contrast, white privilege is “the ability to live life unconsciously.”

The next question Acho hears is, “How come black people can say the ‘n-word,’ but we can’t?” He said he had to do some research to answer this question, but concluded the answer lies in the fact that the word is “synonymous with oppression, execution, and subordination.” The n-word epitomizes slavery, so when a white person uses it, it evokes a “visceral reaction” that reminds black people of that oppression. Black people have co-opted that word for themselves now, and Acho believes white people should never use it, even when quoting someone.

“So if you want to know how you can help,” Emmanuel Acho concluded, “you must first educate yourself so you know exactly what you’re standing for and why you’re standing. Because the only way we can solve this issue is through exposure, through education, through compassion, and through empathy.”