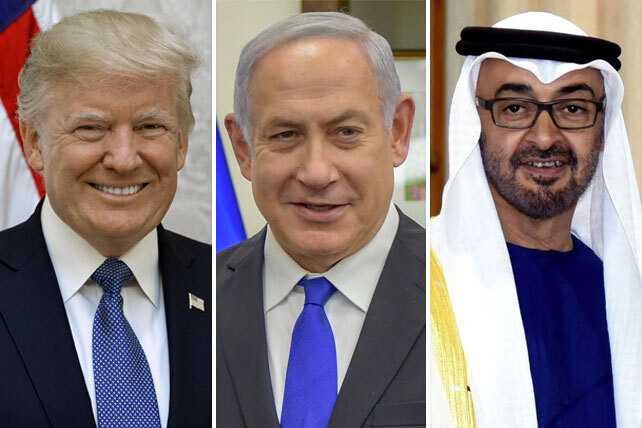 In what President Trump labels a “historic diplomatic breakthrough,” Israel and the United Arab Emirates have agreed to “full normalization of relations,” and Israel says it will “suspend” plans to annex the West Bank. Trump announced the deal Thursday, calling it “a significant step towards building a more peaceful, secure, and prosperous Middle East.” The agreement, known as the Abraham Accord, could signal similar pacts in the future.

“We are already discussing this with other nations,” Trump says, “so you will probably see others of these… now that the ice has been broken.” The UAE follows Egypt and Jordan in opening relations with Israel, though the UAE is the first to “normalize” relations.

Details of the Abraham Accord

According to a joint statement about the Abraham Accord, Israel and the UAE will exchange embassies and ambassadors, and they plan to “sign bilateral agreements regarding investment, tourism, direct flights, security, telecommunications, technology, energy, healthcare, culture, the environment…and other areas of mutual benefit.”

Benjamin Netanyahu, Israel’s prime minister, says his nation is “establishing full and official peace, full diplomatic agreement, with embassies, investments, commerce, tourism, direct flights between Tel Aviv and Dubai and Abu Dhabi.” Regarding annexation of the West Bank, Netanyahu says Israel “received a request to wait temporarily from President Trump” but adds, “It is a temporary postponement. It is not removed from the table.”

Jared Kushner, Trump’s adviser and son-in-law, didn’t say how long that postponement might last. But he credits the president’s team for its “untraditional approach” to Middle East peace. “You can’t solve problems that have gone unsolved by doing it the same way that people before you have tried and failed,” says Kushner, who is Jewish.

While announcing the accord, President Trump joked that it was easier to negotiate with Middle Eastern countries than with Democrats in Congress. He also joked, “I wanted it to be called the Donald J. Trump Accord, but I didn’t think the press would understand that.”

National security adviser Robert O’Brien calls Trump’s efforts in the Middle East “remarkable,” adding that the president “should be a front-runner for the Nobel Peace Prize.”

Will Deal ‘pave the way for peace’?

Former Israeli politician Einat Wilf, a Zionist and atheist, tweets: “Israel has had peace agreements with Egypt and Jordan for decades, but both countries have been resolutely against normalisation. The breakthrough with the #UAE is that it openly speaks of normalisation: trade, tourism, scientific, and economic cooperation. That’s an Arab first.”