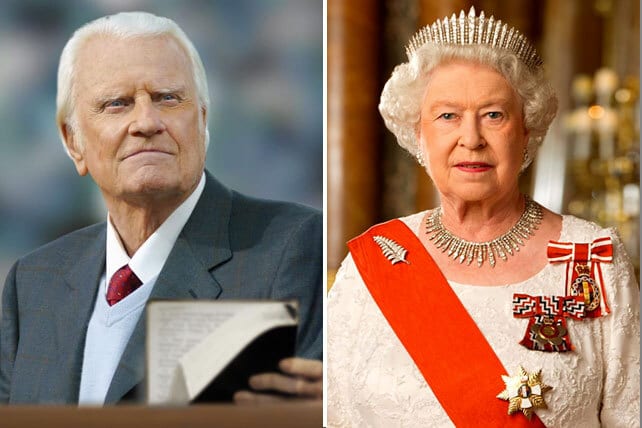 The Reverend Billy Graham, who died February 21, 2018, was one of America’s most respected and beloved Christian evangelists for more than 60 years. Graham preached to an estimated 210 million people around the globe. Despite his globally documented fame as a celebrity evangelist, there remain some intriguing and lesser-known facets of his life, one of which is the surprising friendship between Billy Graham and Queen Elizabeth.

That transcontinental relationship, which was a plot-point favorite in season 2 of Netflix’s lauded series, The Crown, is reentering the spotlight with the release of a new PBS documentary centered on Graham: “American Experience: Billy Graham.” The two-hour film, according to The New York Times, exposes Graham’s interest in politics and “portrays a preacher drawn to power like a moth to flame.”

For his part, Graham expressed regret for his political involvement and power-based relationships in interviews before his death with Christianity Today. (Media scandals included photos of Graham and others posing in prayer on the White House lawn and a recorded conversation where Graham expressed anti-semitic views in a recorded meeting with Richard Nixon.)

“It was naïve of me, I suppose,” Graham said in the interview, “to think that such a close relationship with a President would never be used to serve his political ends. But searching my soul now, I honestly believe my intentions were uncomplicated by personal aims or ambitions.”

To biographer William Martin, author of A Prophet of Honor, he said: “Inside the Beltway is a different world. That’s the reason I don’t go there anymore if I can help it….I don’t go to Washington much, and I don’t go to the Hill much. I used to have lots of friends that I’d go back and see—congressmen and senators—but for years I haven’t done that. I just don’t want to go. I feel God has called me to a much higher calling.”

With the Queen, though, Graham found a powerful but behind-the-scenes ally who also shared his deep faith. And the Queen found someone she could talk freely with about her faith, something Royal Family members typically don’t do publicly.

“People don’t know how the queen struck up this friendship with an old-time American evangelist,” said Robert Lacey, The Crown’s historical consultant, said in an interview with Town & Country magazine while promoting his book, The Crown, The Official Companion. “People don’t know that almost certainly every night the queen kneels beside her bed and says her prayers because that is what her mother did, we know, and her grandmother before her, and that’s how she was brought up.”

The Queen not only offered kinship and shared faith to Graham, she loved to hear him preach. She invited him to preach at Windsor Castle in the Royal Family’s private chapel. She invited him to lunch afterward, and their years’ long friendship was took off.

“Whenever he came to England [the Queen] would invite him to preach, and often when she came to America — the Queen would come to America more often than people realize, on private visits to see the race horses in Kentucky — and she would often visit with Billy Graham because they had the same fundamental Christian faith,” said Lacey.

Graham said in his autobiography, Just As I Am, “After preaching at Windsor one Sunday, I was sitting next to the Queen at lunch. I told her I had been undecided until the last minute about my choice of sermon and had almost preached on the healing of the crippled man in John 5. Her eyes sparkled and she bubbled over with enthusiasm, as she could do on occasion. ‘I wish you had!’ she exclaimed. ‘That is my favorite story.’ “

Graham went on to write: “No one in Britain has been more cordial toward us than Her Majesty Queen Elizabeth II…Almost every occasion I have been with her has been in a warm, informal setting, such as a luncheon or dinner, either alone or with a few family members or other close friends.”