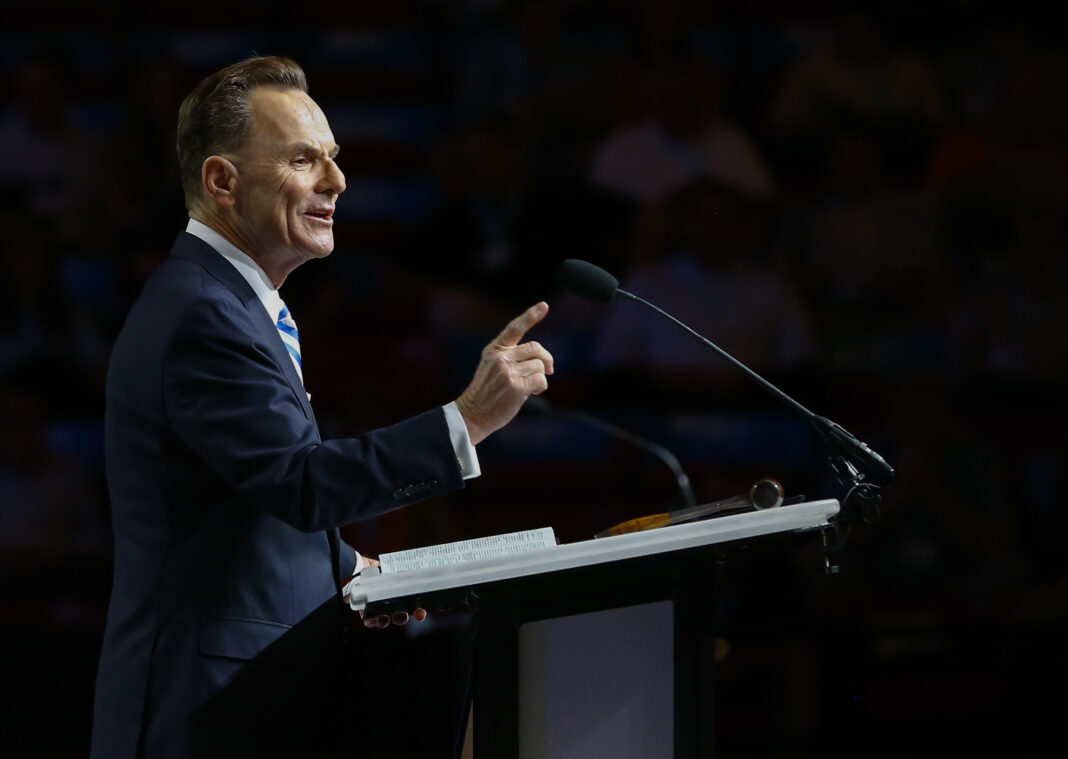 The audio contains a recording of Ronnie Floyd, president of the SBC’s Executive Committee, telling SBC leaders in an October 2019 meeting that he is concerned about preserving the base in the denomination — even if that leads to criticism from abuse survivors.

“As you think through strategy — and I am not concerned about anything survivors can say,” Floyd says in the recording, taken during a meeting to debrief the Caring Well Conference, held to address the handling of sexual abuse allegations within the SBC. “OK. I am not worried about that. I’m thinking the base. I just want to preserve the base.”

The audio also contains a May 2019 recording of Georgia pastor Mike Stone, a leading 2021 candidate for SBC president, saying a working group deciding how to deal with churches accused of mishandling sexual abuse had been “bullied” and “thrown under the bus.”

“There’s this human factor, where good people are thrown under the bus, trying to do their best,” he said during an Atlanta meeting on sexual abuse. “And now we are asking the group to trust some of the ones who threw them under the bus.”

The recordings and a “whistleblower report,” released by Texas pastor Phillip Bethancourt, reveal more details about the divides between SBC leaders over how to deal with sexual abuse in the nation’s largest Protestant denomination. The report comes on the heels of the leaking of two letters from former SBC ethicist Russell Moore, who resigned recently as president of the SBC’s Ethics and Religious Liberty Commission, detailing his disagreements with Stone and other SBC leaders.

In his letter, Bethancourt said he made the recordings of meetings involving Moore, Stone — who was then chair of the SBC’s Executive Committee — and Floyd in 2019. At the time, Bethancourt was on the staff of the ERLC.

Bethancourt said in his letter that he only shared clips and not the full audio of the two meetings because the names of abuse survivors are mentioned. He said he would release the full recording of the meetings to a third-party investigator if Southern Baptists decide to appoint one to look into the matter.

In the days since Moore’s letters were leaked, a number of pastors have called for a third-party investigation into how the SBC leadership has responded to abuse allegations.

“Southern Baptists are at a crossroads as we head to the 2021 SBC Annual Meeting in Nashville. I don’t know which direction Southern Baptists will choose,” Bethancourt wrote in his letter. “But I do believe these ancient words: the truth will set you free. The future of the SBC will only stand if it is built on a foundation of truth.”

Stone has denied Moore’s allegations that he tried to delay efforts to deal with abuse. He did not immediately respond to a request Thursday (June 10) for comment.

In a statement to Religion News Service, Floyd said he called a confidential meeting of SBC leaders in May 2019 to discuss how to respond to abuse in the denomination.