WASHINGTON (RNS) — A new poll reveals most Americans are in favor of offering religious exemptions for the COVID-19 vaccines, yet express concern that too many people are seeking such exemptions. In the same survey, more than half of those who refuse to get vaccinated say getting the shot goes against their personal faith.

The poll, conducted by the Public Religion Research Institute and Interfaith Youth Core and released Thursday (Dec. 9), investigated ongoing debates about COVID-19 vaccines as well as emerging divisions over whether religious exemptions to the shots should even exist.

According to the survey, a small majority (51%) of Americans favor allowing individuals who would otherwise be required to receive a COVID-19 vaccine to opt out if it violates their religious beliefs, compared with 47% who oppose such religious exemptions.

The divide, which researchers noted has remained roughly the same since they began surveying on the question earlier this year, yawns wider when respondents are broken out by party: Only 33% of Democrats support religious exemptions to vaccines, whereas most independents (53%) and a broad majority of Republicans (73%) are in favor of them.

Even so, majorities of almost every religious group believe there are no valid religious reasons to refuse a COVID-19 vaccine, including Hispanic Catholics (68%), other Christians (68%), Jewish Americans (67%), Hispanic Protestants (64%), white Catholics (62%), members of The Church of Jesus Christ of Latter-day Saints (60%), Black Protestants (59%), white mainline Protestants (56%) and other Protestants of color (51%).

Religiously unaffiliated Americans were the most likely to say there are no valid religious reasons to refuse the vaccine, at 69%, whereas white evangelical Protestants were the only faith group among whom fewer than half (41%) said the same. 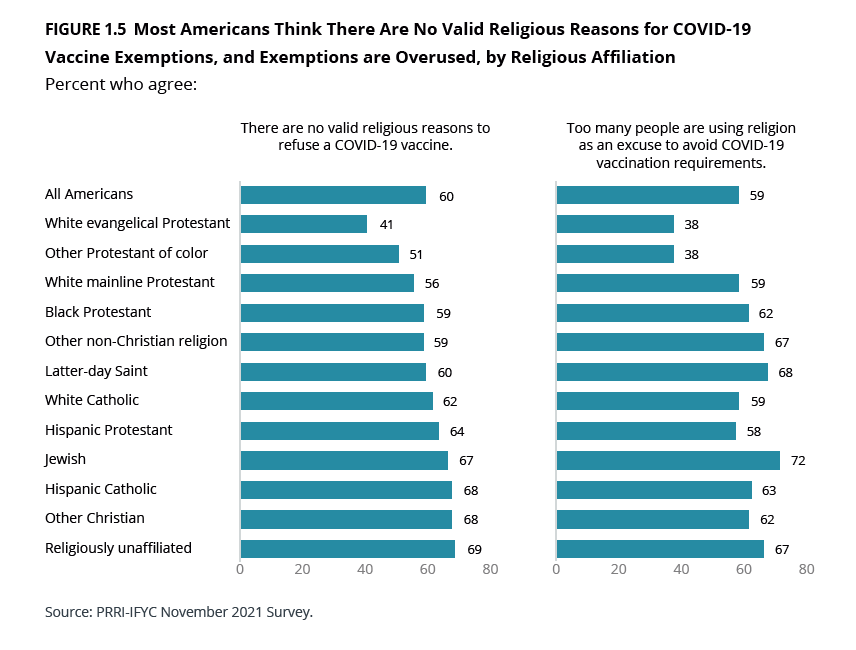 Two groups — white evangelical Protestants and “other Protestants of color,” a category that includes Asian Americans, Pacific Islanders and Native Americans, among others — were the only major faith groups among whom less than a majority (38% each) agreed that “too many people are using religion as an excuse to avoid COVID-19 vaccination requirements.” Jewish Americans, on the other hand, were the most likely to agree with the statement (72%), followed by Latter-day Saints (68%) and religiously unaffiliated Americans (67%). Hispanic Catholics, Black Protestants, white mainline Protestants and Hispanic Protestants all hovered between 63% and 58%.