WASHINGTON (RNS) — The nation’s capital hosted an array of vigils Thursday (Jan. 6) to mark the one-year anniversary of the U.S. Capitol attack, with groups representing a broad spectrum of ideological and religious views lifting candles and prayers to observe the moment in very different ways.

On Capitol Hill, lawmakers closed out a day of events remembering the insurrection with a brief prayer service on the eastern steps of the Capitol. Standing before dozens of lawmakers as they cupped candles, the Rt. Rev. Michael Curry, presiding bishop of the Episcopal Church, prayed for God’s help.

House Speaker Nancy Pelosi then requested a moment of silence to “prayerfully mark one year since the insurrection and patriotically honor the heroes who defended the Capitol and our democracy that day.”

Lawmakers dispersed a short time later as a performer sang a rendition of “God Bless America.”

Down the hill on the National Mall, another group of lawmakers gathered with hundreds of supporters and liberal activists for a lengthy vigil that doubled as a political rally. It focused less on prayer than on activism, with speakers tying last year’s insurrection to present-day fights over voting rights legislation. 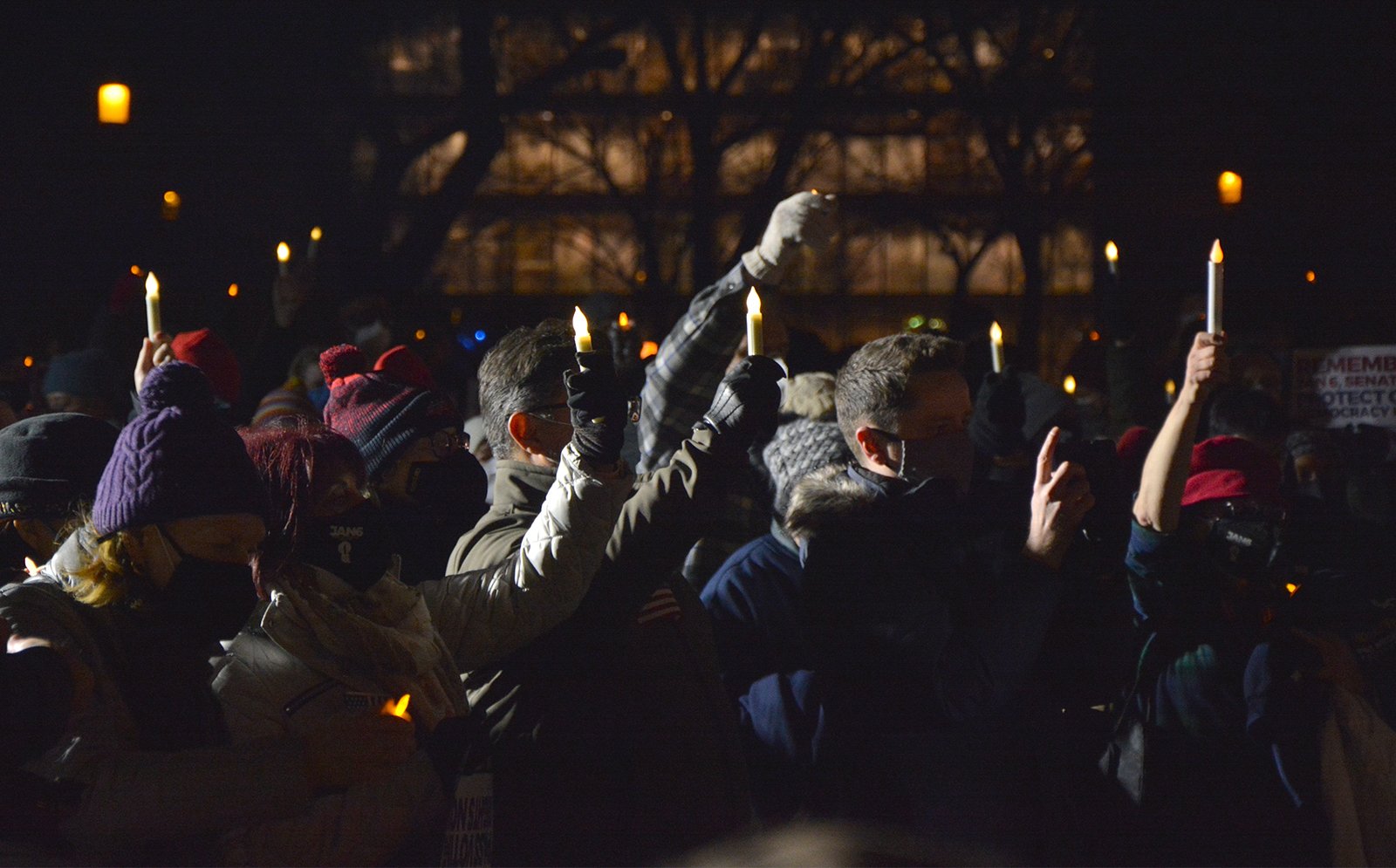 People attend a candlelight vigil on the National Mall on Jan. 6, 2022, in Washington, on the one-year anniversary of the attack on the U.S. Capitol. RNS photo by Jack Jenkins

Jana Morgan, head of the Declaration for American Democracy, a broad liberal coalition that advocates for federal voting rights legislation, said the insurrection constituted “a violent and deadly attack against all Americans and our freedom as voters to choose the leaders who represent us.” But the assault on the democratic process, she argued, was not merely past-tense.

“As we stand here today, the same faction of extremists who attacked our country on Jan. 6, 2021, are hard at work attempting to silence our voices by restricting our freedom to vote, attacking fair districts and quietly preparing future attempts to sabotage our elections,” she said.

Morgan and other speakers accused Republicans of chipping away at voting rights and vented frustration with Democrats — namely, Sen. Joe Manchin and President Joe Biden — who they suggested are not doing enough to stop such moves. As a remedy, they called on liberal lawmakers to pass federal voting rights legislation such as the Freedom to Vote Act and the John Lewis Voting Rights Act, as well as grant statehood to Washington, D.C.

“As we remember the victims of last year’s attack, we also vow to never back down in the face of those who attempt to silence the will of the American people,” Morgan said. “Failure is not an option.”