WASHINGTON (RNS) — Thousands of people gathered on the National Mall on Friday (Jan. 21) for the March for Life, an annual anti-abortion rally that took on a triumphant tone as attendees looked forward to a pending Supreme Court ruling with the potential to strike down Roe v. Wade and return control over abortion legislation to the states.

The speaker lineup for this year’s event, which was themed “Equality begins in the womb,” included an unusually robust array of elected officials — primarily Republicans.

High-ranking officials such as former President Donald Trump have addressed the rally in the past, but this year organizers opted for a large slate of legislators: One of the first presentations at the rally was a video featuring more than a dozen senators expressing opposition to abortion, including Mitt Romney, Mitch McConnell, Shelley Capito, Mike Lee, Marsha Blackburn, Chuck Grassely, Ted Cruz and Rand Paul.

“We believe everyone is equally loved by God, and should be equally protected,” Sen. James Lankford said during the video. “That’s why we don’t give up. That’s why we march for life.”

The Oklahoma senator was also one of around 20 lawmakers who appeared onstage at the event, standing alongside Reps. Dan Crenshaw, Marjorie Taylor Greene, Andy Harris and Mike Kelly, among others. Rep. Julia Letlow of Louisiana, who worships at a congregation affiliated with the Evangelical Presbyterian Church, addressed the crowd directly in a speech. She said she used to pray by reciting Jeremiah 1:5 — “Before I formed you in the womb I knew you. Before you were born I set you apart” — while pregnant with her first child.

“I believe that the Lord makes that promise for every one of our lives, and every soul is precious in his sight,” she said.

Letlow expressed optimism for the upcoming ruling from the Supreme Court on Dobbs v. Jackson, an abortion case that could overturn or gut Roe v. Wade, the landmark 1973 ruling that legalized abortion nationwide. She expected a “monumental decision” from the justices this summer, she said, and thanked the crowd for their “faith and perseverance” in advocating against abortion.

Enthusiasm for the pending Supreme Court decision was a running theme among attendees. Gabriel Clyde, who traveled to Washington from New Bethlehem, Pennsylvania, with a group affiliated with the Wesleyan Methodist Church, said he has attended the march for years because of his faith. 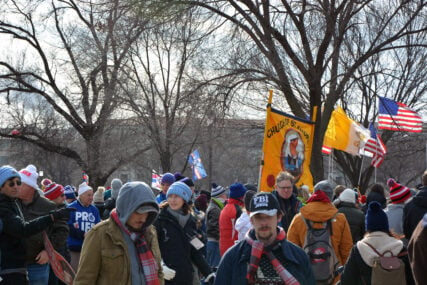 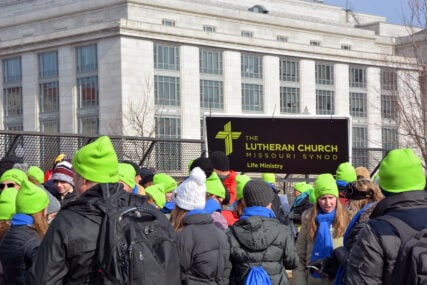 “This is an exciting year,” he said. “This case in the summer is huge. We’ve spent a lot of time praying about it and trusting that things are going to change.”

Clyde was one of many march participants who signaled support for Trump, his head covered in a cap featuring the former president’s name above the words “He will be back.” Although Trump paraphernalia was less abundant than in 2020 — the last time the March for Life was convened in person — Trump flags and “Make America Great Again” hats could still be seen dotting the crowd.