WASHINGTON (RNS) — An interfaith group of activists and religious advocates voiced concerns about the rise of Christian nationalism on Wednesday (Sept. 28), arguing the ideology is a threat to democracy during a briefing on Capitol Hill.

“We are convening this Christian nationalism briefing because we feel it represents a clear and present danger to our democracy and to an inclusive vision of religious freedom,” said the Rev. Paul Raushenbush, head of the group Interfaith Alliance, which organized the event.

Speakers at the hourlong briefing outlined what they said were specific threats posed by Christian nationalism, a fusion of faith and national identity that swelled during the tenure of former President Donald Trump and has continued to gain steam ever since.

Author and lawyer Wajahat Ali noted the visibility of Christian nationalism during the attack on the U.S. Capitol that took place on Jan. 6, 2021. He said it has become common to hear versions of the ideology articulated by Republicans ahead of this year’s midterm elections.

“Christian nationalism was a major motivator for the violent coup that sought to overturn the free and fair election by any violent means necessary,” Ali said, referring to Jan. 6. “Fast-forward to today, and we have GOP Congresswoman Marjorie Taylor Greene openly embracing Christian nationalism and palling around with antisemitic white nationalist Nick Fuentes.”

Fuentes, a right-wing extremist who heads the group America First, has begun openly identifying as Christian nationalist, as has Greene. Meanwhile, Republican candidates such as Pennsylvania’s Doug Mastriano have given voice to versions of the ideology on the campaign trail. 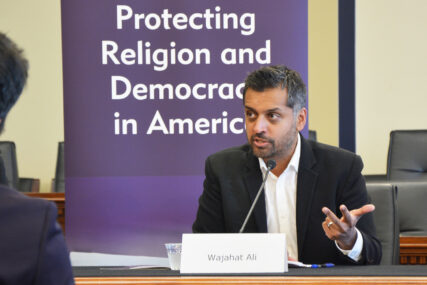 Lawyer and author Wajahat Ali answers a question during the Interfaith Alliance’s talk about Christian nationalism and it’s impact on religion and democracy in America. RNS photo by Jack Jenkins

Ali, who is Muslim, noted members of his faith have long been targeted by Christian nationalists, and he referred to the ideology as the “greatest threat to our national security today.”

“Another word for this growing Christian nationalism movement is fascism,” he said. “Another word is national security threat. Another word, in specific contexts, is terrorism.”

Connie Ryan, who serves as executive director of Interfaith Alliance of Iowa, specified more local concerns. Ryan argued Christian nationalism has driven efforts in her state to allow for Bible classes in public schools, as well as what she described as an overall “demonization” of public schools and the teachers who work there.

“We have legislators who would have been moderate five, six, seven years ago, and they are moving and shifting toward Christian nationalism,” she said.

Tayhlor Coleman, a voting rights advocate who has been touring Texas in a van converted into a “voter registration mobile,” said the rise of Christian nationalism and its impact on the Capitol insurrection reminded her of America’s racist past. She recounted when white racists stormed majority-Black voting precincts in Texas during Reconstruction, sparking violence that resulted in lynchings.

“When I look at the folks who are leading this (Christian nationalist) movement, I don’t see any Christianity,” Coleman said, adding that she was raised Southern Baptist. “What I do see is the very same racism we always have.”